Katie's Got a Gun: "Miss Meadows" goes down with a spoonful of perky squickiness 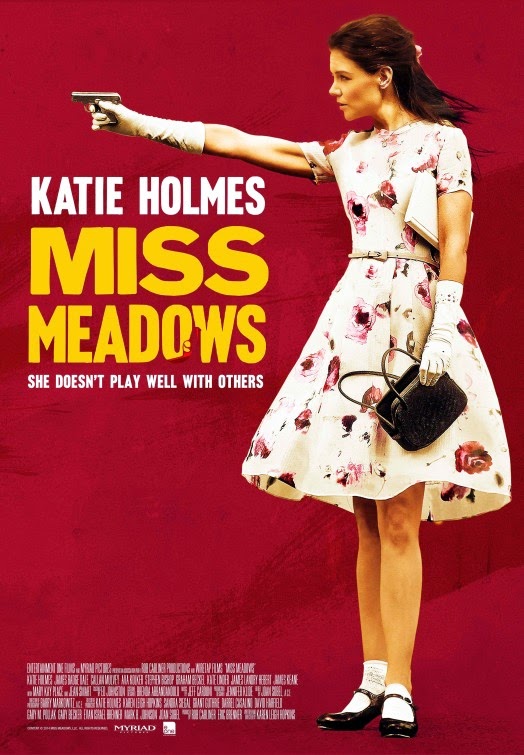 My, what a curiosity "Miss Meadows" turns out to be and not in a good way. With Katie Holmes as a chirpy, well-mannered schoolmarm who also happens to be a sociopath trying to make a difference in the world, or "rotting cesspool and decay and mediocrity," it's a weird film to place and to exist in this world. That sounds like a wickedly amusing idea for satire or a smashed-to-pieces fairy tale, but John Waters' hilariously demented 1994 black comedy "Serial Mom" did it better and 2013's chickish vigilante-comedy "Violet & Daisy" was a valiant try. The annoyingly affected and oh-so-cute "Miss Meadows" aims to be 1981's cult exploitationer "Ms. 45," albeit with less context, and one just keeps scratching his or her head on what screenwriter Karen Leigh Hopkins (1998's "Stepmom," 2007's "Because I Said So") was actually going for in her directorial feature debut, and what Katie Holmes even saw in the project.

The prim, proper and perpetually optimistic Miss Meadows (Holmes) is a Cleveland substitute teacher for a first-grade class. She loves children, and on her days off, she knits, gardens, and participates in the church choir. "Toodle-oo" is her choice way of saying goodbye and she's a stickler for grammar. Like a sweet-as-pie old maid who exists in an older time and drives a classic Nah Metropolitan, Miss Meadows is friends with the birds, squirrels and deer, wears floral print dresses and white gloves, and she enjoys tap dancing and reading poetry when going for walks. Oh, and she also packs a pistol in her purse, taking out convicts, child molesters, and creepy, lecherous men who try soliticiting her in hopes of making the world a better, happier place. Somehow, she catches the attention of the romantic town sheriff (James Badge Dale), who invites her for a spin in his pick-up truck and a snack by the meadow. On the day of a field trip, Miss Meadows goes to order sixteen hot dogs at a fast-food restaurant, only to discover all of the customers dead and the shooter before she guns him down. The police realize it is a vigilante-style crime done by a "'Pulp Fiction' Mary Poppins." How long will it take for the sheriff to realize his love is popping a cap in every bad man she encounters?

Credited as an executive producer, Katie Holmes must have really believed in this film, and she surely commits to the cheerily unhinged part with earnestness and, at times, empathetic human emotion. At a certain point, "Miss Meadows" wants to be a moving character study, but Mary Meadows is underwritten, besides being a chip off the old block (her mother, whom we only see on the phone with her daughter and being played by Jean Smart, tells her that they must right the wrongs of this world). Meadows is harboring a secret that certainly makes sense of why she acts the way she does, but it's treated as an afterthought when revealed in the last twenty minutes and muddles the tone even more. When she knocks on the door of facially scarred ex-convict Skylar (Callan Mulvey) for tea and crumpets (yes, literally), Miss Meadows threatens—no, promises—to kill him if he brings any harm to her peaceful neighborhood. It's the film's one disquieting moment, as "Over the Meadow" is creepily whispered over the scene. The excellent James Badge Dale is the film's conscience as the no-name sheriff, and Mary Kay Place pops up and then disappears as a neighbor who's appreciative but also very suspect of Miss Meadows' naive way of dress. Largely tone-deaf and just strange to be strange, "Miss Meadows" would be more startling if weren't so complacent with its own off-kilter cuteness, which becomes irritating in ten minutes. You can say toodle-oo to this odd bird.