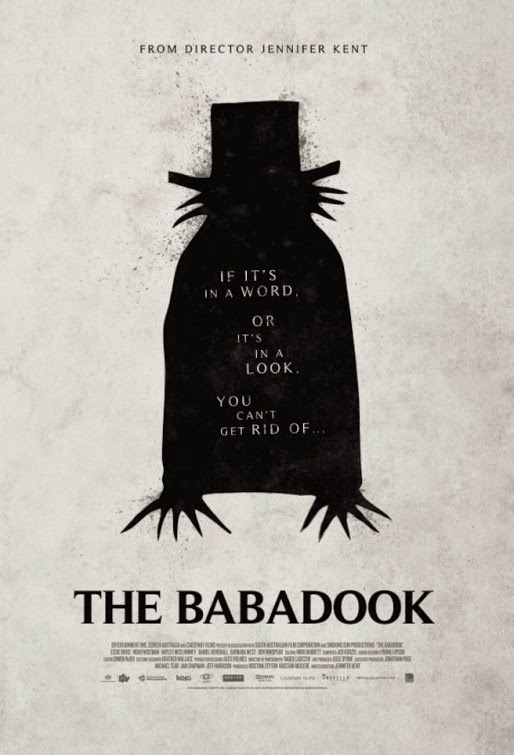 Aussie writer-director Jennifer Kent's masterful feature debut (based on her 2005 short entitled "Monster"), "The Babadook" tingles one's spine just in the mere conception of its titular under-the-bed monster. At feature length, Kent goes beyond that by conceiving a fully realized children's fable in a horror tale's skin that will have legs in the annals of horror cinema. Directed with patience and an elegantly mounting sense of unease, the film is as powerfully scary as it is powerfully cathartic. For a psychological horror thriller, it's deliciously tingly and deeply heartbreaking in equal measure, much like 2008's Spanish horror fable "The Orphanage," and respects its audience's intelligence by avoiding cheap, hollow scares. If the viewer is hoping to jump out of their seats from nonsensical jolts that merely deflate the tension, check theater times for "Ouija."

For almost seven years, Amelia (Essie Davis) is still trying to cope with the death of her husband who died in a car accident as she was in labor with their son. Overstressed and sleep-deprived, the single mother must contend with her 6-year-old son, Samuel (Noah Wiseman), who misbehaves in school from his obsession with nighttime monsters and creating weapons from scratch. When bedtime rolls around, Amelia reads a strange children's pop-up book, "Mister Babadook," off his bedroom shelf. As the story goes, the boogeyman known as The Babadook knocks three times on one's door and invites himself in ("If it's in a word, or it's in a look, you can't get rid of the Babadook!"). At first, Amelia is alarmed by the horrific nature of the book, but doesn't think much of its existence and hides it on top of a wardrobe. Soon enough, mother and son are being haunted by the monster in the book, which gets destroyed and keeps popping up. As the nights go by and Amelia can't seem to get much sleep, Samuel starts acting out even more and frustrating his poor mom, and the two-person family becomes alienated by everyone around them, including Amelia's own uppity sister Claire (Hayley McElhinney). Insanity is inevitable, and the unwelcome visitor may already be in the house.

Classically composed, chill-inducing, and challenging, "The Babadook" is much more than a bump-in-the-night tale with the writer-director's thematic metaphors gnawing under the surface, reminding one most of Roman Polanski's "Repulsion." Like that 1965 masterpiece and many films of its type, this film blends reality and nightmare into the horrific hallucinations Amelia is experiencing. Is Mister Babadook real? Or is the creature just something Amelia manifested from her mixture of grief, sleep deprivation, and stress from rearing a child who's acting out? It will be best left to find out on the viewer's own experience and interpretation, and the smart, more mature route is taken. Kent has a terrific touch for light and darkness, sound, and space, but "The Babadook" also just speaks for itself. The horror is the by-product of these emotionally invested characters. Without the through-line of loss and trauma, the fragility of motherhood, and the presence of Amelia and Samuel, the film would only be a literal monster movie and not have as much of an emotional impact as a durable horror film about the human condition.

A superb Essie Davis devastates in the emotionally exhausting role of Amelia, calling for her to be appealing and vulnerable and even frightening. The viewer's heart goes out to her, even when Amelia's sanity goes crumbling. She can only really help herself. In the pantheon of child actors, Noah Wiseman is entirely credible and affecting without any affect in a performance that runs the gamut of emotions and demands a lot from such a young newcomer. Samuel can be a whiny, bratty terror at times, but that is certainly the point, and Wiseman sells it just enough. Inspired by German expressionism, the monochromatic, sharp-edged illustrations of the pop-up book are wonderfully, hair-raisingly creepy, courtesy of illustrator Alexander Juhasz. Sporting a top hat and long, sharp hands, the titular Babadook is an unsettling boogeyman whose effectively shadowy entrance is refreshingly not always accompanied by a musical sting. Radek Ladczuk's strikingly overcast cinematography also expertly using shadows, so we only see just enough of what might be lurking in Amelia's home. The fantastic sound work of scratching and growling deserves kudos as well.

It would be very easy to show the title monster at every turn, but Jennifer Kent ensures that she believes in the unknown and how much more frightening such a supernatural concept can be when more is left to the imagination. It takes a filmmaker's uncompromising vision, too, to use spare parts from other movies that could form into a derivative whole, but "The Babadook" never feels generic or impersonal. Kent puts her individual spin on certain horror tropes, while keeping the emotional fragility of Amelia and Samuel well intact and in the foreground. She keeps her story at a satisfying pitch, never overcranking or losing her less-is-more approach for over-the-top scare tactics. A great future is foreseen for Kent, and you can forget about getting a good night's sleep. For any discerning horror enthusiast out there, this is a must.