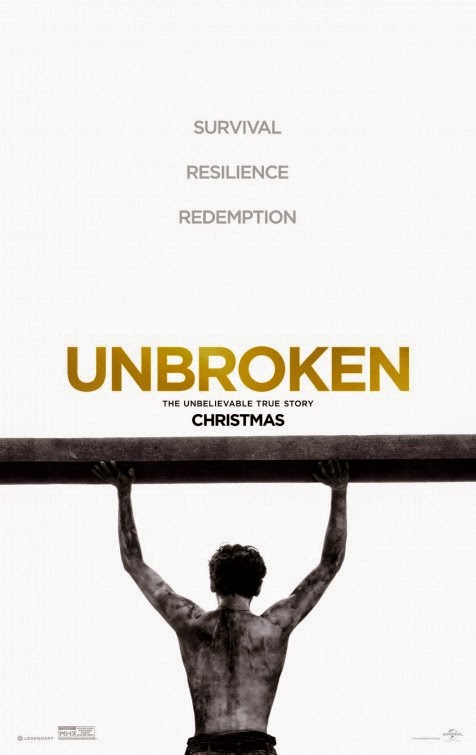 An inspirational, old-fashioned account of former Olympic track star Louis Zamperini becoming a prisoner in a Japanese war camp, based on "Seabiscuit" author Laura Hillenbrand's nonfiction book "Unbroken: A World War II Story of Survival, Resilience, and Redemption," "Unbroken" aims to be a well-meaning "triumph of the human spirit," a film that should clearly matter. It's well-made and solidly acted, so why isn't it extraordinary? On all sides of the camera, Angelina Jolie's sophomore directorial debut (2011's "In the Land of Blood and Honey"), from a screenplay by Joel Coen & Ethan Coen, Richard LaGravenese and William Nicholson, is technically impressive and admirable, but it rates as just a very noble effort that still somehow feels whitewashed in its treatment. Still managing to stir, "Unbroken" is just never as emotionally satisfying as it could and should have been.

It's 1943 above the Pacific Ocean, where champion Olypic runner Louis Zamperini (Jack O'Connell) finds himself at war as a U.S. Air Force bombardier. Flying in a B-24 bomber, he and his crew crash into the ocean, killing eight men. From there, Louis and two fellow survivors, pilot Russell Allen 'Phil' Phillips (Domhnall Gleeson) and tail gunner Francis 'Mac' McNamara (Finn Wittrock), spend 47 days drifting on two life rafts in the middle of the ocean, finding food, fending off sharks and dodging into the water from bullets from the enemy overhead. When only Louis and 'Phil' are rescued, their would-be saviors turn out not to be the Allies but Japanese soldiers. Eventually, Louis finds himself held captive at a different POW camp, run by a sadist known as "The Bird" (Miyavi), who will make it his mission to break the Olympian.

Rather two-dimensional and squarely hagiographical in its overly respectful telling, the film engages without gutting us, but keeping us engaged is still key when the outcome and fate of the protagonist are preordained. The creative choice of backtracking to Louis' rise as an Olympian might have deflated the momentum of the current harrowing story, but it pushes on efficiently, cherry-picking life events from Louis' early life, being raised by Italian immigrant parents and then becoming a petty thief who would, with the encouragement of his older brother Pete (played at different ages by John D'Leo and then Alex Russell), join the track team. In 1936, Louis would run in the Olympics, making him a sort-of celebrity in the POW camp. A "jumping from the frying pan into the fire" survival story if there ever was one, it is tough and gripping before it starts to tread one note, lingering, punishing and never going soft on the brutality. There were even respites in "12 Years a Slave," but "Unbroken" strikes again and again and again with suffering and endurance, until it's time to go home.

Jack O'Connell (2014's "Starred Up") is a promising newcomer, capable of selling war-boy pluck and reaching raw emotion and physical power, especially when he's forced to take a punch from every prisoner in the camp. Though not the actor's fault, the complexity and edges have been sanded down in the characterization of Louis Zamperini, rendering him a symbol in his own incident-filled story. The real Zamperini died this year at age 97, and it goes without saying that O'Connell surely does a fine tribute performance of playing him as a hero full of resolve and perseverance. The other actors are all committed to their gaunt bodily transformations, particularly Domhnall Gleeson (2014's "Frank") and Finn Wittrock (TV's "American Horror Story: Freakshow"). Making his screen debut, Japanese musician Miyavi (Takamasa Ishihara) is the epitome of irredeemable evil as "The Bird," but what else is new? He's interestingly effeminate, but a pretty one-dimensional villain who deserves to be throttled with his own stick. With an indelible painterly eye, the film is shot in a way only ace cinematography Roger Deakins knows how, regardless of how grim an image can get. One shot composition captured when Louis and 'Phil' are found by the Japanese, whose shadows hover over their raft, is a real stunner.

Most of the time, filmmakers who want to tell a remarkable story about a real-life person feel the need to paint them without any personal flaws of their own, and that's exactly what Angelina Jolie has done. The subject matter is inherently compelling, especially Louis Zamperini's forgiveness and peace with Japan (which is only mentioned in the closing title cards) after such a grueling journey, but distinction and nuance are nearly lost at sea. Almost too stately and straightforward of a director like Clint Eastwood, Jolie is also not shy of a little Christ-like iconography in a sequence where our godsend must hold a heavy wooden beam on his shoulders without getting shot dead. The entire takeaway of the story boils down to Louis' brother's patently obvious motivational quote, "If you can take it, you can make it," that guides our hero to the end instead of actually getting inside his head. It will be hard to feel completely unmoved, but something about this treatment just feels too kid-gloved and ultimately saccharine to be truly impactful and worthwhile. Jolie at least never strays from Louis or marginalizes him, and for that, "Unbroken" never breaks its nobility as a skilled, if remarkably safe, survival war saga.