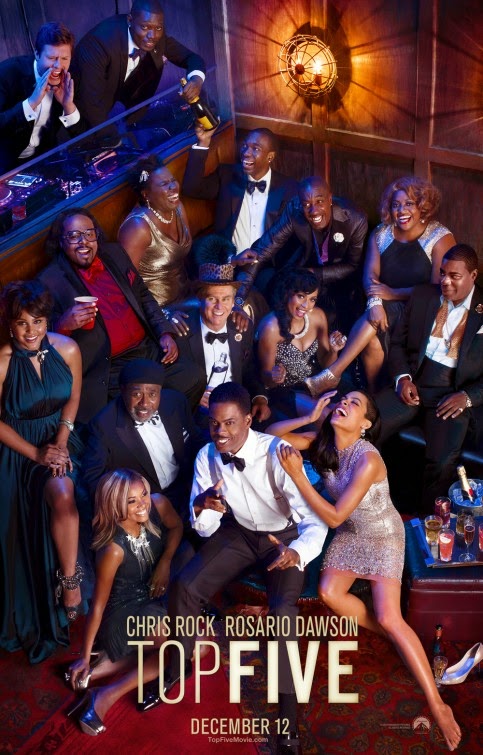 The third directorial effort from Chris Rock, "Top Five" might as well be a clear-eyed documentary about the rise-and-fall of a stand-up comedian's life and career. Rock's stand-up has always been edgy, trenchant and hilarious, usually because stand-up is in small doses, but in film, he's often been an acquired taste, his voice carrying to the back of the theater's last row as if loud always equals funny. But when he's in front and behind of the camera, he has been better. His first time at bat, 2003's "Head of State," was an amusing, loosely relevant frivolity and his second, 2007's "I Think I Love My Wife," was a funnier, smarter surprise. With his latest outing, Rock's aims are more personal and ambitious. Verbally profane, not to mention very R-rated, "Top Five" has already been receiving smashing praise for being in the tradition of Woody Allen. Beyond Rock writing, directing, and starring in something self-reflexive, the fictionalized version of himself reminiscing about his earlier, funnier days, and scenes of walking and talking along the streets of New York City, the film is not quite "Stardust Memories." Feeling more like part "Funny People" and part "Before Sunrise," it's sometimes too broad and messy, but has enough of a fresh perspective and pointed observations to make.

Rock plays Andre "Dre" Allen (judging by the last name, do you see his influence?), a former New York stand-up comic who's on the precipice of his career. He once made a series of dopey, box office-topping comedies, "Hammy," starring as a cop dressed in a bear costume, and then ran into problems with substance abuse. Now clean and engaged to Bravo reality TV star Erica Long (Gabrielle Union), who's busy planning a lavish, expensive wedding for the cameras, Andre is just trying to be taken seriously by his critics by promoting his would-be "thought-provoking" prestige picture, "Uprize!," that doesn't seem to be getting the attention he hoped. Once he agrees to be interviewed for a profile piece from New York Times reporter Chelsea Brown (Rosario Dawson), they take the day to open up to one another about their lives and the state of Andre's career.

"Top Five" manages to be a lot of things: a semi-autobiographical expose about hitting rock-bottom, a cutting confessional about fame and the entertainment industry, and a romantic comedy with a Cinderella twist. The film certainly has its intermittent pleasures—namely the interaction between Chris Rock and Rosario Dawson—but "Top Five" is funnier on a moment-to-moment basis than it is side-splitting and more lightweight than hard-hitting. With that being said, there is still a watchable appreciation to Rock's candid honesty in placing such a thin veil between his own persona and his Andre Allen creation. While Rock hasn't always been as successful as an actor as he has been as a stand-up comic, he plays it more natural here when virtually playing himself. Though Andre can't walk down a street without signing his autograph, he is damaged, once losing himself in the bottle and his commercial movies. His critics have deemed him less funny than he used to be and can't take his "serious" move into playing a Haitian revolutionist seriously.

Scripted by Rock himself, "Top Five"—the title refers to Andre asking those on-screen for their top five hip-hop artists—has a gold mine of "who's who" talent showing up on screen, from Kevin Hart, as Andre's loudmouthed agent; a pre-accident Tracy Morgan, as his brother-in-law; J.B. Smoove, as his overprotective bodyguard; Sherri Shepherd, as his ex-girlfriend who still hangs out with Andre's family; up-and-coming SNL writer Leslie Jones, as a towering, sharp-tongued friend; and Broadway legend Ben Vereen, as Andre's deadbeat father. A priceless Jerry Seinfeld, Adam Sandler, and Whoopi Goldberg also make cameo quickies as themselves, and a recognizable rapper even has a delightfully weird appearance in a jail cell that one will not soon forget. In a more key role as Andre's fiancee Erica, Gabrielle Union gets to play an intentional caricature that of a vapid reality-show celebrity, but luckily, she gets a scene of self-examination that hints at Erica being a real person who is famous with no talent. As always, Rosario Dawson (here with a half-shaved head) is a lovely breath of fresh air as Chelsea, a multi-talented young woman who has a daughter to support, a relationship she needs to figure out with DJ boyfriend Brad (Anders Holm), and a four-year recovery coin to prove her days of hardship.

Much of the humor in "Top Five" deals with racial politics and stereotypes, with many a scene having one black comedian calling another the "n" word. There's an amusing knock at a fake Madea-in-a-haunted-house Tyler Perry movie that's selling more tickets than "Uprize," and a funny bit where Andre goes on Sirius XM radio for an interview and is told to be funnier and to "give it more stank." Amid the film's many episodic digressions, there's a tasteless groan of a sequence—Andre's "bottom" in a Houston hotel in 2003—with Andre and two pillow-fighting hookers and then his sleazy handler (Cedric the Entertainer) and said two pillow-fighting hookers. So over-the-top and vulgar it's almost surreal, it's the epitome of "lowest-common-denominator" and could have been axed from the final edit and not changed a thing. On the flip side, one of the film's biggest, most rollicking gross-out sequences that actually doesn't fall flat involves hot sauce and a tampon —you'll just have to see it to believe it.

Of all art forms, comedy might be the most subjective. What will have certain audiences rolling in the aisles will have others wondering if they missed the punchline or even the inherent humor behind the joke. For my money, it's mostly in the chatty walk-and-talk stretches between Chris Rock and Rosario Dawson where the film really flies and generates a lot of good will. When Andre insists the "Planet of the Apes" movies have a racial subtext, Chelsea refutes with, "Sometimes a movie is just a movie." A transparent third-act "break-up" aside, their tit-for-tat banter, based on intelligence and "rigorous honesty," is a glimpse of what could have been. Finally, a late scene where Chelsea takes Andre to the Comedy Cellar is telling, proving Andre (and by proxy, Rock) never lost his funniness. As a feature film, "Top Five" isn't successful enough to even make one's top twenty, but this is an uninhibited chance to really see Rock at the height of his powers.