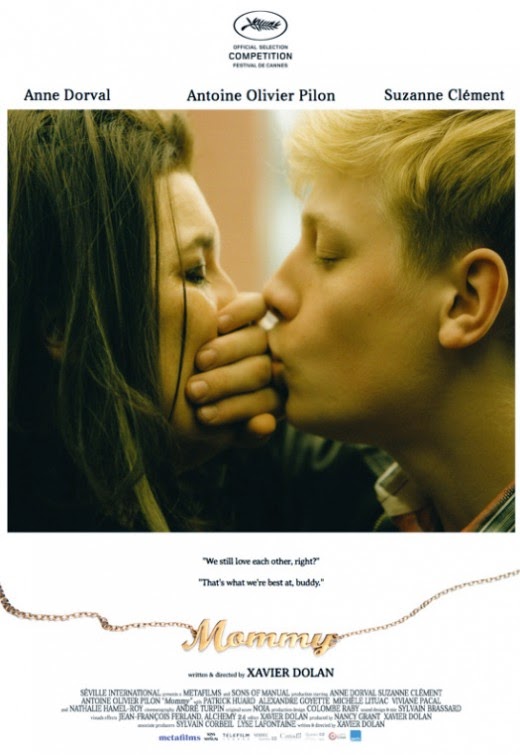 Only 25 years old and not about to pace himself with five films already under his belt in five years, French-Canadian writer-director Xavier Dolan burst onto the filmmaking scene with 2009's "I Killed My Mother," won the Jury Prize at the 2014 Cannes Film Festival for his latest film and even shared it with Jean-Luc Godard's "Goodbye to Language." Dolan's smashing "Mommy" continues the enfant terrible filmmaker's themes about resentment in mother-son relationships. If Dolan wasn't already known as a wunderkind in certain filmic circles beyond Canada, he cements himself here as a true discovery whom cinephiles should keep an eye on and revisit his previous efforts. As human drama, it's wild and alive but controlled and intimate, and as pure filmmaking, it's bravura. At a walloping 139 minutes, "Mommy" is never less than captivating.

An opening text prologue lets us in on a new (but fictional) Canadian law that parents can consign his or her child with behavioral problems to an institution. Just as she gets into a car accident that wasn't her fault, widowed mother Diane "Die" Després (Anne Dorval) receives a call from her son's detention center. Her troubled, bad-mouthed 15-year-old son, Steve O'Connor (Antoine-Olivier Pilon), set the cafeteria on fire that injured a younger student and flooded the facility, forcing Die to home-school him. Broke at 46 years old but able to afford a house in the Quebec suburbs, Die is a mess who can barely take care of herself, and that's even before she's fired from her job as a "Dear Abby" columnist at which point Steve promises to take care of her. Across the way lives married neighbor Kyla (Suzanne Clément), a painfully shy high school teacher on sabbatical who suffers from a stutter and could use a little light in her life. After Steve bites the hand that feeds him, Kyla happens to drop by Die's house and fixes up a gash on Steve's leg. In the long run, Kyla becomes good friends with both Die and Steve, whom she starts teaching in-house. Die knows that Steve will be fine for now, but it might not last.

As "Mommy" unfolds in hopeful but tragic fashion, the viewer gets sucked into the shifting dynamics between Die, Steve and Kyla. In matching writer-director Xavier Dolan's empathy for his characters, all three performances are exceptional. Smacking her gum, smoking cigarettes, dressed in garish, trampy clothes and lugging around a tacky, clangy carabiner of keys with a pen attached, Anne Dorval's dynamite performance is raw and nuanced as Die. She loves her son, but it's tough love, and she's doing the best she can. As the volatile juvenile terror named Steve, Antoine-Olivier Pilon is riveting to watch. He's commanding and convincingly unruly but also vulnerable and charismatic. Steve has ADHD, attachment disorder, and a bit of an Oedipus complex. When Steve comes home with groceries in a shopping cart and a "Mommy" necklace, Die assumes he has stolen everything, which sends Steve into a fit of rage to the point that he chokes his mother. Die defends herself and locks herself in a closet, waiting for him to calm down. When Steve isn't being violent, belligerent and not obeying his mother's house rules, he is a loyal son. A poignant Suzanne Clément does wonders with the complexly written role of Kyla, and while one may wonder what her relationship with her real family seems so detached, it's a thrill to watch her character gradually open up with her temporarily new family.

Dolan has an effective ear for music, including Dido's "White Flag," Counting Crows' "Colorblind," Celine Dion's "On Ne Change Pas," and Lana Del Rey's "Born To Die," every use of music hitting an emotion whether it be melancholy, joy, or immediacy. A euphoric sequence that uses Oasis' "Wonderwall" as a source of liberation and progress in the characters swells the heart. He also frames his film in 1:1 aspect ratio (a small frame about the size of a huge postage stamp) that only gets pushed wider for a couple of special sequences. Very late in the film, there is also a change of course with a fantasy montage so beautifully conceived as pure visual storytelling and so full of feeling. Also, see if you can notice two visual cues to "Home Alone." Rough, heartbreaking, heady, and everything in between, "Mommy" undoubtedly leaves one stunned, exhilarated and moved. This is bracing cinema to behold.