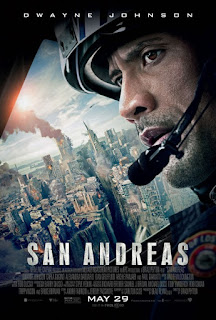 Seeing an earthquake devastate the Golden State probably won't be much of a fun escape for Californians. However, "San Andreas" exploits those real-world fears to such loopy extremes that this amalgamation of "Earthquake," "The Towering Inferno" and "The Poseidon Adventure" comes so close to being the disaster movie to end all disaster movies and beat out Roland Emmerich's supremely preposterous but armrest-clenching "2012." Directed by Brad Peyton (2012's "Journey 2: The Mysterious Island") and penned by Carlton Cuse (TV's "Bates Motel"), this summer picture is very much out of the Irwin Allen/Roland Emmerich handbook, positioning reliable and/or competent actors on a big-screen version of a Universal Studios amusement ride. Yes, it's monumentally dumber than rubble. Sure, the disaster itself looks like the visual artists went to town on their computers and destroy the Golden Gate Bridge for the gazillionth time. All things considered, "San Andreas" is a fun entertainment in a check-your-brain-at-the-door, you-get-what-you-pay-for kind of way.

All in a day, LAFD search-and-rescue helicopter pilot Chief Ray Gaines (Dwayne Johnson) is hit with a few sucker punches. His soon-to-be-ex-wife, Emma (Carla Gugino), is ready for a divorce, judging by the papers he's received in the mail, and she and their college-aged daughter, Blake (Alexandra Daddario), plan to move in with Emma's new boyfriend, high-powered architect Daniel (Ioan Gruffudd). With a family tragedy still hovering over him, he's about to make things right when a catastrophic event hits the west coast. Meanwhile, Caltech seismologist Dr. Lawrence Hayes (Paul Giamatti) and his partner, Dr. Kim Park (Will Yun Lee), who have discovered a computer program to predict earthquakes, are caught in a quake themselves at the Hoover Dam, resulting in Park's death after a heroic act. Hayes returns to Pasadena with TV journalist Serena (Archie Panjabi) awaiting an interview before his assistants make out a reading that the San Andreas fault is about to collapse. As Blake is thrown into danger but accompanied by London brothers Ben (Hugo Johnstone-Burt) and Ollie (Art Parkinson) in San Francisco, Ray and Emma come together and hope to save their daughter this time as redemption for losing their other.

Nit-picky audiences who require more realism and poetic dialogue in their disaster flicks need not apply in going to see "San Andreas." There will always be a place for mindless popcorn fare, and this $100-million disaster-porn extravaganza doesn't pretend to be anything more than it is and will only work if your disbelief is fully suspended. As sheer spectacle that inspires thrills, "San Andreas" delivers when centering on the destruction, showcasing its giant budget in wow-worthy form. The opening is a portentous jolt, wasting no time placing an irresponsible teenage girl in peril. Taking your eyes off the road and texting will nearly get you killed, let alone on a a twisty mountain road in the San Fernando Valley, but so will a falling boulder that knocks the girl off the road. One sequence where Emma's lunch with Daniel's uppity sister (Kylie Minogue) at a sky restaurant ends in the building crumbling is actually pretty harrowing. The film must also have its tongue planted firmly in cheek when Ray and Emma tandem parachute, landing to safety on the second base of AT&T Park, and you bet there's a "getting to second base" joke ready. As the film's destruction escalates to an absurdly over-the-top level, a cargo ship and shipping containers in a tsunami even get thrown in because they can. When it takes time to saddle us with stock character development, the family drama is more creaky and soapy than compelling. Even when backstories are revealed—Ray and Emma lost their younger daughter on a water-rapids trip and aren't about to leave their oldest—they're mostly two-dimensional fodder for the natural disaster. In the early going, expectations are raised a bit for how characters will be sketched, only to turn back and tell its audiences to get real. Emma's land-developing boyfriend, Daniel, might actually be a nice guy, until he's just another cowardly, selfish jerk whom you hope gets crushed. TV journalist Serena isn't greedy in getting the scoop, understanding Hayes' loss, but then she just becomes an afterthought hiding underneath desks. Otherwise, it's part of the fun seeing characters have so many close calls as they're thrust into danger but not too much, while a sea of extras are instantly killed.

Dwayne Johnson, a movie star with brawn and charisma, makes the best of a role that is more archetype than fully formed person. His Chief Ray Gaines is like the Last Man on Earth, a hero who can save anyone, as long as they are part of his immediate family once the real destruction happens. Carla Gugino sincerely acts accordingly with terror and awe as everything goes to hell around her, even if most of the wreckage was probably added in post, and gets to utter the one F-bomb in a feisty manner. 29-year-old Alexandra Daddario is back to playing a nubile teenager again when she's clearly older, but as Ray and Emma's daughter Blake, she's able to bring a resourcefulness to a part that still requires her to be saved. Daddario also shares a nice chemistry with Hugo Johnstone-Burt's English engineer Ben, and Art Parkinson is a cutie patootie with useless information that will come in handy later on as his little brother Ollie. Paul Giamatti is probably too good for the entire movie, but he's completely believable as Dr. Lawrence Hayes, bringing more plausibility to the scientific goings-on than the script deserves.

"San Andreas" is patently ridiculous and indefensibly dumb. That much is true, and as long as the eye-popping effects do their job, it's not hard to have one's attention diverted from the stockpile of clichés and through-the-roof amount of coincidences from the dopey screenplay. If the nearsighted scope of characters lessens the dramatic tension, the chaotic action set-pieces are shot on an epic-sized scale without ever resorting to incoherent shaky-cam and spaced out enough to not feel numbing. Compared to any one of Michael Bay's noisy orgies of machinery socking other machinery, there are actually individually grand moments that are impressively staged and will be remembered in hindsight. Slapping on a cornball drowning-resuscitation scene that shouldn't have been, as well as some laughable flag-waving, still somehow don't sink "San Andreas" into a disaster area. Its intentions are so pure that the filmmakers must have known what they were doing all along. Suckers for disaster movies will instantly know where they stand.