Queen of Comedy: Wiig impresses but "Welcome to Me" feels uneasy 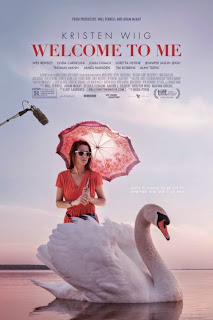 After "Bridesmaids," no one can say Kristen Wiig has picked the same like-minded project again and again (2012's "Friends with Kids," 2013's "Girl Most Likely," 2014's "Hateship Loveship" and "The Skeleton Twins"). In admirably flexing her dramatic muscles, she keeps being drawn to characters who seem to be unlike her likable persona — flawed, complicated, often unsympathetic sad-sacks. "Welcome to Me" undoubtedly marks Wiig's most offbeat, daring and trickiest role to date as a woman with borderline personality disorder, but the film wants to be a tragic comedy and it doesn't quite stick the landing. While BPD isn't depicted in a dishonest, mawkish way and Wiig's performance deserves props—and, really, in a fair world, she should be receiving accolades for her work—it's difficult to say what response the film is trying to pull from the viewer. Uncomfortable though it may be, what is supposed to be alternately biting and funny just rubs one the wrong way.

Wiig plays Alice Kleig, a Palm Desert, California, woman with borderline personality order who's just gone off her meds. She lives alone in her apartment, flooded with labeled videotapes of "The Oprah Winfrey Show" to feed her obsession. She hasn't turned off her TV in eleven years. Oh, and she uses masturbation as a sedative. When she plays the lottery and wins $86 million from the California Stacks Sweepstakes, Alice spends her winnings in all the most reckless ways. First, in her unstable state of health, she breaks off sessions with her therapist, Dr. Moffet (Tim Robbins), who believes his patient is a danger to herself and others. Then, she buys an indefinite stay in a reservation casino hotel and whips out her checkbook in front of the struggling TV informercial production studio co-owners, Rich (James Marsden) and his sensitive brother Gabe (Wes Bentley). Against the objections from Rich and Gabe's producer Deb (Jennifer Jason Leigh) and director Dawn (Joan Cusack), Alice buys 100 episodes to be the host of her own talk show, "Welcome to Me," a one-woman vanity show that chronicles her dreams, her personal grudges, and key moments in her life through reenactments.

Director Shira Piven (wife of Adam McKay and sister of Jeremy), making her feature debut, and screenwriter Eliot Laurence (Logo's sketch series "The Big Gay Sketch Show") come up with a series of sketchy vignettes courtesy of Alice's show and pack in plenty of rudderless subplots with only the most cursory exploration. She begins an affair with Gabe, who's a recovering sex addict; has a rift with her long-suffering best friend, fitness entrepreneur Gina (Linda Cardellini), whose own problems are of no concern to Alice; gets financial advice from her gay ex-husband, Ted (Alan Tudyk); and then strikes up another relationship with a journalism grad student, Rainer (Thomas Mann). Piven was also able to populate her first feature break with a great cast (Joan Cusack, Wes Bentley, James Marsden, Jennifer Jason Leigh, Tim Robbins), who do their due diligence without outshining Wiig.

Unevenly scripted and wishy-washy in tone between the grounded and the absurd, "Welcome to Me" has several amusing moments of the awkward variety during the show that shares the same title as the film. It's hard not to squirm and cringe when Alice comes out on her requested swan boat for her first episode and freezes with a deer-in-the-headlights expression, as well as her mispronunciation of "carbohydrate" during her cooking segment on baking a meatloaf cake and then an on-air neutering of dogs. However, what opens the film to more criticism is the unusual treatment of a woman with a very fragile mental state who's crying for help. It's hard to believe everyone around Alice would be so irresponsible, letting her go through with sharing her personal life on TV. Then again, when Alice is alone and breaking down, there's enough of a sensitivity toward the character that the film doesn't totally come off offensive and condescending. So, meshed together as a whole, is the picture supposed to be a mocking joke with a smattering of heavy stuff? Or, is it a satire about emotional exhibitionism and reality TV exploitation? Whatever Piven and Laurence were going for, the film's tone does a disservice to the psychologically disabled Alice, never striking a delicate balance.

For all of its trouble spots, Kristen Wiig is the unstoppable savior. As Alice Kleig, Wiig is rather good, impressively portraying the brittle, narcissistic mind of someone with a mental disorder, and she's as fearless in her commitment as she was with her one-joke creations Gilly and Dooneese on "SNL." Even in a scene where Alice hits rock bottom, Wiig bares herself emotionally and physically in the casino she's living in. Constantly earning more uneasy raised eyebrows than chuckles or genuine pathos, "Welcome to Me" keeps flirting with being a better, more sincere film. Alice's story is often hard to watch, sometimes painfully sad and sometimes playing for laughs, but the film just isn't up for making her more of a tragic figure in need of help than an oddball one who gets to host her own show.