Vino Love: "Book Club" mostly sings when the spry leads get to do their stuff 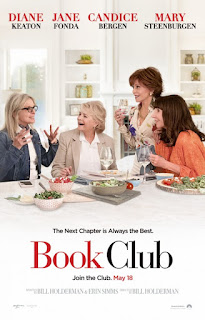 The generically titled “Book Club” deserves credit for not being what it easily could have been: a hacky, wacky old-people-getting-naughty comedy with screen legends mugging for the camera. Whereas 2013’s “Last Vegas” grouped together a quartet of veteran actors for a Vegas trip full of groan-inducing hip replacement and Viagra jokes, this latest bid at letting seasoned actors get frisky comes off more charming than smarmy with women at the forefront. Using the tizzy that female readers went into after reading E.L. James’ kinky bestselling trilogy as the jumping-off point, it plays more like “Sex and the City” for the older set through the lens of a Nancy Meyers wish-fulfillment confection (the kitchens are impeccable!). Debuting director Bill Holderman, who co-wrote with Erin Simms, fills the script with some sitcommy contrivances, sure, but when he allows veterans Diane Keaton, Jane Fonda, Candice Bergen, and Mary Steenburgen to do their stuff, they all shine.

Friends since college, Diane (Diane Keaton), Vivian (Jane Fonda), Sharon (Candice Bergen), and Carol (Mary Steenburgen) have kept in touch through their monthly book club that began with Erica Jong’s 1973 novel “Fear of Flying.” A recent widow after 40 years of marriage, Diane may be fragile but not as much as her adult daughters (Alicia Silverstone, Katie Aselton) believe her to be when they insist she move to Scottsdale to be closer to them. Vivian, a Los Angeles hotelier, is the randy speed-dater of the bunch but has never been about a long-haul relationship with an emotional connection. With a recently engaged adult son and her divorced husband (Ed Begley Jr.) who’s about to marry a much younger woman (Mircea Monroe), federal judge Sharon lives alone with her cat and hasn’t played the dating game in 18 years. Carol is an accomplished chef who wants more excitement in her long-time marriage with husband, Bruce (Craig T. Nelson). When the four friends reunite for their book club, Vivian selects “Fifty Shades of Grey” for them to read. As they tear through the book, giggling at the naughty material, it stirs something in their once-dormant libidos. Diane conquers her fear of flying when she finds herself wooed by dashing pilot Mitchell (Andy Garcia); Vivian finds her life turned upside down when former flame Arthur (Don Johnson) reenters her life for the first time since she turned down his proposal; Sharon finally gives dating site Bumble a try and finds success; and Carol tries everything to get her husband’s eyes off of fixing up his motorcycle and become sexually attracted to her again.

Comedically spry as it is surprisingly wise about having a lot to live for even beyond middle age, “Book Club” knows what it has in its acting pros and lets them freely work the blue material. Diane Keaton, Jane Fonda, Candice Bergen, and Mary Steenburgen all receive equal billing, as they should, and prove that there are still solid roles for women of a certain age. They might not be spring chickens, but none of them are ready to give up on their lives, and as long as it’s Chardonnay, these ladies can drink Carrie Bradshaw and her gal pals under the table. The film does follow the map of a traditional romantic comedy, but if any cast any sharpen up the material, it is this one, and it boggles the mind that these women have never worked together because they feel like the oldest of friends.

Keaton really is playing a version of herself as, well, Diane, who wears an idiosyncratic wardrobe of baggy pants and polka dots that Diane Keaton would wear, but she finally gets the chance to be daffy and radiant without coming off as a ninny (her last four movies or so have done just this). She shares a lovely chemistry with Andy Garcia, who’s still got it; sells a scene where Diane sits in a shopping mall massage chair next to a group of geriatrics; and later delivers a rather poignant and well-earned speech to her two fear-mongering daughters, who baby their mother and make her feel like an incapable invalid when she still has all of her faculties. Fonda, still a timeless knockout at 80 years old, is the corresponding Samantha Jones of the bunch and delivers her double entendres with gusto as Vivian, a woman who has had a roster of men but has never literally slept with a man she loves. Casting Don Johnson is also a clever touch—his daughter, Dakota Johnson, is the co-star of the “Fifty Shades of Grey” films after all—and he works up a snappy back-and-forth with his scene partner. Bergen, in particular, is the comic standout, receiving a juicier role than she has on screen in quite a while and slinging dry zingers with her expertly honed comic timing as Sharon, who at one point tries on Spanx underneath her dress, only to get tangled up in it. Steenburgen is adorable as Carol, one hoping her attempts at sexing it up will work on her husband (her near-car accident after she doses her husband Viagra seems like a nod to her character putting the moves on Steve Martin in 1989’s “Parenthood”), and she makes her tap-dancing routine set to Meatloaf’s “I’d Do Anything For Love But I Won’t Do That” sing when it very easily could’ve fallen flat. Richard Dreyfuss has one nice scene with Bergen as one of Sharon’s dates, a tax accountant, but Wallace Shawn has nothing to do.

While it doesn’t write the book on aging, “Book Club” is mainly a lark for women over 60 that does what it needs to do for its target audience with likable, charming performances all around and fizzier writing than one might expect. Somehow, the film doesn’t always press as hard for laughs, and when it does give in to the temptation of one Viagra gag or Carol’s gardening water meter reaching “moist” while reading the steamy book, they are more amusing than not. Less successful are some rooftop scenes with distracting green screen of the L.A. skyline, as well as the not-so-skillful use of photoshop for the ladies’ group photos in the introductory scenes, and the jaunty score needlessly pipes in to punch up the comedic effect. Still, as glossy entertainment of the comfort-food variety, “Book Club” is refreshing proof that age really is just a number. In this day and age, it’s the kind of counter-programming team-up for those not interested in anything related to the Marvel Cinematic Universe.