Only Half is Lost: Unevenly told "Adrift" sails on the strength of Woodley 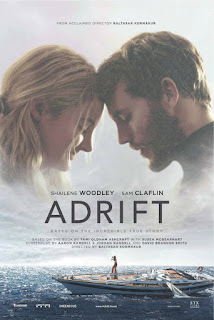 “Adrift” is based on the true story of a couple sailing a yacht 4,000 miles from Tahiti to San Diego, only to get caught in a Category 4 hurricane. After the wreckage of the yacht, one of them had to fight to stay alive for 41 days. This is a tragic yet inspiring story deserving of its cinematic telling but rendered uneven by Icelandic director Baltasar Kormákur (2015’s “Everest”) and screenwriters Aaron Kandell, Jordan Kandell and David Branson Smith (2017’s “Ingrid Goes West”), who seem bored by or just don’t trust a chronological timeline. Yes, it’s refreshing to find a smart, capable and believably resourceful woman guiding the ship, literally, but despite mostly sailing on the strength of Shailene Woodley’s committed turn through a seemingly arduous shoot, “Adrift” treads water most of the time in trying to meld a love story and a survival seafaring drama without a single shark to be found.

Free-spirited, world-traveling 23-year-old Tami Oldham (Shailene Woodley) approaches life as an adventure, going where the wind takes her. Hailing from San Diego, she has lived in Tahiti for five years and has worked odd jobs on schooners. In 1983, when Tami meets 34-year-old British bloke Richard Sharp (Sam Claflin), who travels on his boat that he built himself, the attraction is immediate and mutual. When a wealthy older couple hires Richard to sail their 44-foot yacht to San Diego, he brings along Tami, and without any warning, they sail right into a hurricane. As Tami comes to in the flooded cabin, the odds are stacked against her. Tami uses her resourcefulness, navigating a sextant and a storm jib and then pumping the water out of the cabin and even succumbing to hunting her own fish for food, even though she was a vegetarian until now. Is all hope lost?

Choosing to drop the viewer right into the aftermath of the wreckage, “Adrift” begins midstream, Tami coming to in the flooded cabin of the yacht after the storm with no sign of Richard. It’s an attention-grabber, but once the film reverts back to the beginning of how she met Richard and then back to the present situation until finally converging, the structure gives the film a frustratingly stop-and-start pacing and grows stagnant, knocking the wind out of its sails. Some films are non-linear by design and effectively earn the structure with a purpose; “Adrift” is not one of them. Every time the editors cut away from five months ago to the present and back, it undercuts the perilous intensity and any real momentum and tension the story could have had. When a key development is revealed more than halfway through the running time, it’s not the powerful, illuminating a-ha moment as intended; in fact, it doubly feels like a dime-store device used to pay off the flashback structure and an overused “plot twist” that so many films, usually horror thrillers, employ.

Like 2013’s stripped-down “All Is Lost,” where Robert Redford was a man alone on a boat, “Adrift” compels as a basic story about the process of survival, but this time with much more dialogue and character development. When the film is being an intimate two-hander, Shailene Woodley and Sam Claflin share a nice, swoon-worthy chemistry together that forces one to hope they both make it out alive. Before even going above and beyond with the emotional and physical demands, Woodley presents Tami Oldham as an appealing hippie (much like Woodley herself) and delivers raw poignancy without a single inauthentic note. Claflin has the less demanding role of the two, but before he is incapacitated, there is a natural charm to Richard. The cinematography by Robert Richardson (2015’s “The Hateful Eight”) is stirring, capturing the vastness and lonesomeness of being stranded at sea, and the single take of the boat capsizing during the eye of the hurricane (which comes near the beginning of the third act) is impressively executed. Unfortunately, one feels adrift watching it. The viewer is only occasionally rattled and moved, and ultimately, one’s patience is not rewarded, making the destination to the journey not that worthwhile.