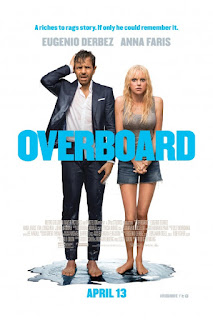 A minor classic from late director Garry Marshall, 1987's screwball romantic comedy “Overboard” still works as a cable mainstay due to the unfakable chemistry between Goldie Hawn, who played a snobby heiress falling overboard and losing her memory, and Kurt Russell, a widowed handyman who got back at her by convincing her of being his wife and mother to his three sons. The same probably won’t be said of the gender-reversed, Latin-flavored 2018 remake, which is bound to slip right out of memory. Director Rob Greenberg, who co-wrote the screenplay with Bob Fisher (2013’s “We’re the Millers”), does keep the story beats of this high-concept premise generally the same, making sense to why the original film’s screenwriter Leslie Dixon gets a story credit here. Gender-swapping aside and attempting to appeal to Spanish-speaking audiences, this riches-to-rags romantic comedy doesn’t bring anything too fresh or special, canceling itself out when neither the romance nor the comedy work too well. So mild, bland, and not all that funny, 2018’s “Overboard” is a painlessly mediocre trifle that the vivacious Anna Faris can’t even keep afloat.

Blue-collar working single mom Kate Sullivan (Anna Faris) holds down two jobs—delivering pizzas and cleaning carpets—to support her and her three daughters, while studying for her nursing degree. When she is hired to clean the carpets on the yacht of arrogant Mexican playboy Leonardo Montenegro (Eugenio Derbez), he berates Kate like one of his servants, refusing to pay her for her labor and then throwing her and her expensive equipment into the water. As Leonardo’s ship leaves the coastal Oregon town of Elk Cove, he falls off his yacht at night and washes ashore with amnesia. Fortuitously, Kate hears the news and, with a little encouragement from her best pal Theresa (Eva Longoria), concocts a plan in poetic justice, rushing into the hospital and claiming "Leo" to be her husband with false photos and documents. At first, Leo is shocked to find that he’s married, poor, sterile and a former drunk. Then, as Kate forces him to keep house and work for Theresa’s husband’s construction company so she can take time to study more for her nursing exam, Leo turns into a decent, domesticated guy. Can Kate keep the lie going, and will she actually fall in love with her fake husband?

By allowing Kate to have power over Leonardo rather than the other way around (and everyone around her just going in on the ruse at Leonardo's expense, no questions asked), “Overboard” seems more in touch with the 21st century's feminist turnaround than the dated, admittedly sexist approach of the 1987 film, coming off less creepy and mean-spirited than it could have. TV director Rob Greenberg does bring a light touch to the material, save for a few moments of broad, sitcommy slapstick involving Leonardo's fish-out-of-water hijinks with a wheelbarrow and a pot of spaghetti sauce, and has fun riffing on telenovelas. Not only are the cooks at the pizza place where Kate works fans of such Spanish soap operas, but the integral subplot with Leonardo’s scheming sister Magdalena (Cecilia Suárez) doing whatever she must to become the heiress to their ailing father’s (Fernando Luján) company has the tonally melodramatic yet farcical tone of a bona fide telenovela. There’s also a throwaway reference to the 1987 film, as a doctor at the hospital recalls there being a similar case of amnesia happening to a pretty young lady in the ‘80s, but that's about as sly and vaguely clever as things ever get.

While Anna Faris is always likable and charming, even here as Kate, one still wishes the script wasn’t suboptimal to her daffy comedic talents and hadn’t relied on her to be the comedic straight man, as it were. Starring in sleeper hits, like 2013’s “Instructions Not Included” and 2017’s “How to Be a Latin Lover,” that did good business in his home country, Mexican superstar Eugenio Derbez is talented in playing a scoundrel who only wants to drink and party with babes, and his arc from prince-to-pauper-and-back tracks better than not. With that said, Derbez is so good at playing Leonardo as a prick that when Kate and amnesia-stricken Leonardo must finally get together because it’s required that they do (and because their names match the actors of the star-crossed lovers in "Titanic"), Faris and Derbez have not cooked up any kind of detectable spark to make the viewer buy them as amorous partners. The supporting cast is engaging enough, Eva Longoria and Mel Rodriguez bringing more comic flair than expected in obligatory roles as Kate’s friends and pizza shop owners Theresa and Bobby, as do Josh Segarra, Omar Chaparro, Jesus Ochoa, and Adrian Uribe as Bobby's construction crew who mock Leonardo's "lady hands." Swoosie Kurtz also breezes by in a few scenes as Kate’s flaky mother Grace, who can’t watch her three granddaughters because she's finally living her dream as a community theater actress.

There’s a certain amiability to “Overboard” that it's difficult to scrounge up any vehement hatred for it, but the laughs are wanting and the woeful lack of chemistry—comedic and romantic—between Anna Faris and Eugenio Derbez does not help what is allegedly a romantic comedy. When Leonardo finally becomes the working, cooking family man Kate needs, it’s where the film gets a little bit sweet, but as the premise must sluggishly go through the motions without actually earning the outcome, it all just feels forced, plainly predictable and prefabricated. If Goldie Hawn and Kurt Russell made their unlikely romance work in the original, Faris and Derbez can’t even fake it well for the same results. It’s palatable enough to go down with ease, but 2018’s “Overboard” is too tepid and forgettable to even have legs as a lightweight time-waster on cable. Those jaded by remakes might have a right to be this time.