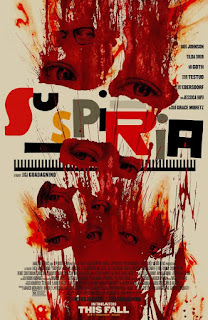 Luca Guadagnino’s loose remake of Dario Argento’s stylishly kaleidoscopic 1977 giallo “Suspiria” has been a decade in the making. If Argento’s awe-inspiring fever dream still remains matchless, this 2018 rebirth of “Suspiria” is nothing short of audacious, going its own singular way, reinventing itself, and avoiding comparison altogether with a grimmer, daringly transgressive vision. Almost defiantly, Guadagnino's film differs visually, narratively, and emotionally from Argento’s surreal, operatic phantasmagoria, and it is far more thematically dense and heady with a 152-minute running time but nearly just as artfully hypnotic and sure to be extremely divisive. Instead of imitating or being beholden to a masterwork, director Luca Guadagnino (2017's "Call Me by Your Name") and screenwriter David Kajganich (2016’s “A Bigger Splash”) expand upon the source in a post-World War II Germany historical context and confront how guilt and shame fit into power struggles between leaders and followers, all while still spinning a story about a coven of witches running a dance academy. Deliberately taking its time but grabbing hold like an inescapable spell taking over and washing over the viewer, “Suspiria” seduces, disturbs, and mesmerizes, as if the film itself was conjured through dark, inexplicable alchemy.

The original “Suspiria” was pretty straightforward in terms of story—a young American ballerina comes to discover that her ballet school in Munich is run by a coven of witches—but it was more of a sensory experience anyway. The fundamental bones of the narrative and character names remain the same here, albeit with an integral tweak, the academy now all-female, not co-ed, and specializing in avant-garde dance in lieu of ballet. Unfolding through “six acts and an epilogue set in divided Berlin,” the film opens in 1977, Berlin, with dance student Patricia Hingle (Chloë Grace Moretz) seeking immediate help from her psychiatrist, Dr. Jozef Klemperer (Lutz Ebersdorf), when she tells him that the Helena Markos Dance Company is run by a coven of witches who have invaded her thoughts. He chalks up her hysterics to delusions, until Patricia goes missing. The next day, Ohio Mennonite dancer Susie Bannion (Dakota Johnson) arrives in Berlin to join the dance company and be taught by her idol, dance instructor Madame Blanc (Tilda Swinton). When the formally untrained Susie is welcomed to audition, her raw potential instantly catches the eye of the austere Blanc and all of the other matrons. With rumors suggesting that runaway Patricia has left to join the radical anti-fascist group Red Army Faction, her disappearance leaves an open spot for Susie, who’s given free room and board. Fellow dancer Sara (Mia Goth) is the next one to realize that something isn’t quite right with the school when she meets with Dr. Klemperer, and by that time, it’s too late for Susie, Blanc’s ultimate muse whose talent for the dance is tied closely to the wicked goings-on in the bowels of the school.

In form and style, “Suspiria” is distinctly its own beast, one that unsettles, sears into the recesses, and leaves one staggering out of the cinema two and a half hours later in a daze but ready to unpack all of it post-haste. Unconcerned with making it a mystery that the dance company is indeed a front for a coven, director Luca Guadagnino finds his own languid yet transfixing tempo to tell this story with a queasy, forbidding mood that completely envelops and haunts the viewer. Conjoining Susie's growing sisterhood into the company and the coven's machinations with Dr. Jozeph Klemperer's parallel story thread, writer David Kajganich’s screenplay extends well beyond the original film and functions within a larger societal context as the outside world faces its own strife and shifting allegiances. The specificity of the story’s 1977 backdrop, a time of political unrest in Germany during the German Autumn, is crucial, not arbitrary. As news breaks out on TV sets, on radios, and in conversation about the Baader-Meinhof gang, responsible for bombings and the Lufthansa Flight 181 hijacking to eradicate the lingering Nazism, politics exist within the witchy dance company, too. There is very much an internal divide between the matrons, based on who they think should remain in control of the coven, whether it be the ancient Helena Markos or the revolutionary Madame Blanc.

Departing from the vibrantly colorful aesthetic of Argento’s film, cinematographer Sayombhu Mukdeeprom (2017’s “Call Me by Your Name”) lends a moody, painterly eye to every textured frame, employing ‘70s-style zooms, long takes, and split diopters to the suitably gloomy color palette of rainswept Berlin. Though Goblin’s part-tinkly, part-foreboding, whisper-laden music score is hard to match, Radiohead vocalist Thom Yorke’s indelibly eerie and portentous arrangement comes mighty close, along with Yorke's mournful original song "Suspirium." Damien Jalet's choreography and Walter Fasano's editing of the expressive, carnally loaded dancing, which plays an integral role, are both stunningly precise, as seen in a dread-inducing public performance of Volk that has all of the dancers costumed in red rope. Whereas Argento sprinkled in show-stopping, elaborately gruesome slasher-centric set-pieces from beginning to end, the first act of violence comes forty minutes into this film, and it is unshakably ghastly. Marrying airtight editing and shockingly grotesque imagery, the sequence is a tandem dance, cutting between two different studios and building to two wildly different crescendos, in which Susie dances Blanc's intricate choreography, unknowingly controlling disgruntled Russian dancer Olga (Elena Fokina) like a malleable puppet, her body supernaturally smashing into the glass mirrors and violently contorting itself into a pretzel.

Dakota Johnson is subtle but physically uninhibited as Susie Bannion, navigating through the story quite differently than Jessica Harper’s Susie did in the original film; in one way, Susie is a passive vessel being groomed for a sinister purpose besides playing the protagonist in the dance troupe's signature piece Volk, but in other ways that should not be revealed, she has more power than anyone as she gets drawn further into the darkness and leaves her devout Mennonite upbringing in the dust. Mia Goth (2017’s “Marrowbone”), an ethereal and unique screen presence, is a more accessible guide as Sara, who learns through Dr. Klemperer that danger is afoot at the academy and does some of her own investigating. As the severe Madame Blanc, Tilda Swinton is effectively intimidating and compelling. It is a testament to Swinton's chameleonic abilities, not to mention rather impressive prosthetic make-up, that she is able to unrecognizably disappear into two other key roles, one of which is Dr. Jozef Klemperer, a Holocaust survivor still in despair over the disappearance of his wife, Anke (Jessica Harper, in an affecting cameo). Though credited as unknown actor "Lutz Ebersdorf," Swinton provides a much-needed source of compassion and a sympathetic emotional entry into the story as Klemperer. With that said, it’s interesting to note that no other men are given speaking parts besides a couple of police inspectors who are stripped naked and mocked by the witches. Down to the smallest of parts of the predominantly female cast, all of the performers make a lasting impression, including Chloë Grace Moretz, as the quick-to-leave Patricia; Angela Winkler, as the menacing Miss Tanner; Ingrid Caven, as Miss Vendegast; and Renée Soutendijk, as Miss Huller.

Alluring, challenging, and impossible to turn away from, “Suspiria” is decidedly not most films, nor is it for everyone, but it will provoke strong reactions nonetheless. Requiring deeper consideration after one has mentally processed what has just been experienced and even repeat viewings to rediscover new takeaways, it cannot be dismissed or denied for its unmistakable craft and rattling, spellbinding power. As the film reaches its sixth act and heads toward an unsparing, splatter-laden Grand Guignol climax that of a ritualistic sabbath, it simultaneously takes mercy with an epilogue so unexpectedly cathartic and quietly heartbreaking; it turns out there might be a shred of humanity in even the darkest corners of witchcraft after all. For those willing to give oneself over to it, “Suspiria” feels like a full meal that demands to be dissected and pored over, and whether anyone wants it there or not, it slinks under one's skin and stays there.