Thankless Shift: "Possession of Hannah Grace" competently made but plodding and not scary 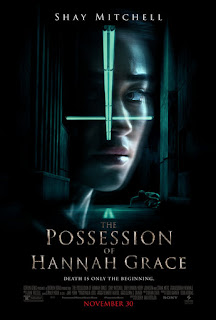 There might be worse horror films involving demonic possession than “The Possession of Hannah Grace,” but such a backhanded compliment still doesn't make it worthwhile. It might look like the film is subverting expectations by getting its standard exorcism done in the first five minutes. From thereon, Dutch director Diederik Van Rooijen and screenwriter Brian Sieve (MTV’s “Scream”) take a nifty idea by staging their horror film inside a morgue and ruinously strip it of all its possibilities. For morgue-set chillers that were executed better, look no further than 1998’s morbidly creepy “Nightwatch” and 2015’s effectively skin-crawling “The Autopsy of Jane Doe.” Unless self-opening morgue drawers and the sounds of bones cracking are unnerving enough for 86 minutes, “The Possession of Hannah Grace” just kind of lies there without any legitimate scares.

In the throes of possession, teenage girl Hannah Grace (Kirby Johnson) is writhing while chained to a bed and sprayed with holy water before supernaturally levitating the priest who’s performing the exorcism and impaling him on a large crucifix; before a second priest is nearly strangled to death, Hannah is suffocated with a pillow by her father (Louis Herthum), leaving the exorcism unfinished. Three months later, Megan Reed (Shay Mitchell), an ex-cop who turned to alcohol and pills after blaming herself for her partner’s death, lands the position of an overnight intake assistant in the morgue at Boston Metro Hospital. She is now clean but still struggling, and the solitary work is just what Megan and AA sponsor Lisa (Stana Katic), a nurse at the hospital who told her about the job opening, think she needs to stay out of trouble at night. On Megan’s second night of the graveyard shift, the sliced and burned body of Hannah Grace rolls in. As Megan tries photographing and fingerprinting the cadaver, the equipment fizzles out and Hannah’s fingerprints won’t register in the database. Then, Megan may or may not be hallucinating that a horde of hell flies come out Hannah’s body and that tremors keep spilling scalpels all over the floor. When Hannah’s father breaks into the morgue to try and immolate his daughter’s body in the incinerator to destroy the demon once and for all, all hell breaks loose for Megan and anyone else (i.e. the ambulance driver and the security guards).

Plodding from interchangeable scene to scene of Megan opening and closing Hannah’s morgue drawer, unzipping and zipping back up Hannah’s body bag, and waving her arms around to motion the automatic sensor lighting, “The Possession of Hannah Grace” falls into repetition, never really getting out of first gear, or paying off beyond a surface level. Directing with slick, bare-minimum competence, Diederik Van Rooijen does make the most of his brutalist hospital monstrosity and keeps the lighting dim (a bulb going out in the ceiling lighting to briefly form a crucifix is a more subtle touch than it sounds). He also thankfully goes light on fake-out jump scares, but the level of dread is never suffocating as it should be and even a jolt on the hospital roof with a flashing red light is flubbed by its obvious timing.

Shay Mitchell (TV’s “Pretty Little Liars”) makes a valiant effort of throwing herself into the material before having to react in fear, but she feels stifled by a script that doesn’t do much with Megan’s flawed, complex backstory, which is given a rather perfunctory redemption arc. At some point, someone asks the same question everyone else is wondering — why hasn’t Hannah killed Megan? Megan might make a great new host for the demon, being damaged and working on some inner demons of her own, but that question never gets the clarity it should. Contortionist Kirby Johnson is creepy enough as the titular Hannah Grace, who is never more than a flexibly undead passenger in her own film, but by the time she actually leaves her slab, the climax of Hannah crab-walking and spider-walking up walls is too silly to be scary, the fakey CGI doing the film no favors. Though designed to frighten, “The Possession of Hannah Grace” is a moribund exercise in how to make a horror movie that’s easy to shake off as soon as the lights come up.