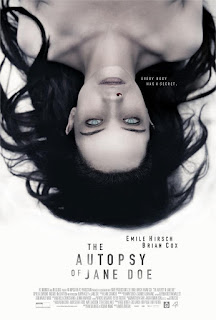 In a horror film, the coroner is almost always a bit player, never a lead. In that respect, “The Autopsy of Jane Doe” stands the unprecedented distinction of making father-and-son coroners the two main protagonists of the piece. Norwegian director André Øvredal makes his inaugural English-language debut, following 2011’s fun, quirkily humored “Troll Hunter,” with this morbidly entertaining horror-mystery-procedural-chamber-piece set entirely in a morgue (save for the opening scene). Frightening but not without sly drops of humor, the film only adds to the macabre milieu with a pall of goosebumpy eeriness that reminds the viewer what having a pulse feels like.

In a small Virginia town, police respond to a brutal triple homicide in a family home. A fourth body, that of an unidentified young woman (Olwen Kelly), is also found partially buried in the basement, but there is no motive and the cops have an inkling someone was trying to break out rather than in. Over at the third-generation family-owned Tilden Morgue and Crematorium, it’s just another day on the job for veteran mortician Tommy (Brian Cox) and 30-year-old medical technician Austin Tilden (Emile Hirsch), who are father and son. About to leave work to go on a movie date with girlfriend Emma (Ophelia Lovibond), Austin decides to postpone their evening and stay with his dad when the corpse of the young woman gets wheeled in. The Tildens must complete an autopsy overnight—a storm brews outside, natch—and find the cause of death of their Jane Doe, but as they begin to cut into the cadaver, their discoveries force them to realize that something isn’t quite right. Like a bullet in the brain without a head wound, the outside of Jane’s body is in pristine condition, but her lungs are charred and, well, more clues would dive right into spoiler territory.

One can use the process of elimination to guess what kind of horror subgenre “The Autopsy of Jane Doe” might fit into as it goes along, but all bets are still off. The film manages to keep audiences firmly on edge, and director André Øvredal and screenwriters Ian B. Goldberg and Richard Naing fully trust in our imaginations and miss few opportunities to get the hair on the back of one's neck to stand up on end, even during the quiet spaces between the payoffs. The autopsy itself is surgically detailed without being gratuitous, but that doesn’t prevent those scenes from being generously squirmy, especially when the scalpel and drill come out. Then there are a handful of freaky, indelible chills involving a hallway convex mirror and a “bell ting”—a bell is tied around the toe of a corpse to make sure he or she is dead—as well as the sound of the morgue drawers opening during a power outage. The creepy distortion of the McGuire Sisters’ cheerful “Open Up Your Heart (And Let the Sunshine In)” playing on the radio is another asset.

Key to the film’s scares are two excellent performances by Brian Cox and Emile Hirsch, who are perfectly cast as a father-son pair of morticians. Tommy and Austin have a healthy relationship and they work well together, but as a father and son, they do both share the loss of a loved one. Tommy is a widower and Austin is a young man without a mother, but they still own a piece of her in the form of her pet cat and let it run around the hallways (and, yes, it’s a safe bet that the cat won’t be purring by the final reel). Major credit is also due to Irish actress Olwen Kelly for playing dead as the titular Jane Doe; that is actually her on the cold slab, remaining naked and still (while wearing prosthetics as the actors dig through her innards). Understanding the value of suggestion apart from more third-act exposition than it needed, “The Autopsy of Jane Doe” effectively stiffens the body without compromising the wrath of its antagonist. More importantly, it makes one hope and pray that Tommy and Austin don’t become bodies on a slab.