Bowed to Kill: "The Perfection" a lurid, steadily insane genre-hopper that keeps reinventing itself 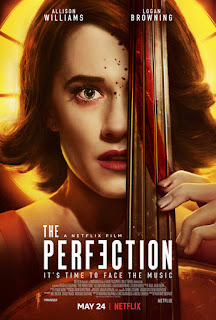 Charlotte Willmore (Allison Williams) used to be a cello prodigy at Boston’s prestigious music conservatory Bachoff before she sacrificed her career to take care of her dying mother in Minnesota. A decade later when she reaches out to her former cello mentors, Anton (Steven Weber) and wife Paloma (Alaina Huffman), Charlotte takes a flight to Shanghai for a reception to celebrate the next generation of musical talent and meets Anton’s latest talented protege, Elizabeth ‘Lizzie’ Wells (Logan Browning), who immediately took Charlotte’s place upon her leaving. As Charlotte and Lizzie fawn over each other with admiration and begin a friendship that evolves into something more, these two perfect pupils then get on a bus to tour China, until Lizzie begins to feel extremely sick. To say anything more would spoil the twisted delights and wild, what-the-fuck secrets.

Deliciously, compulsively watchable, “The Perfection” is a brew of duplicitous storytelling that keeps reinventing itself with each new turn and perspective rewind as cleavers and brain-burning, bug-bursting illnesses get thrown into the mix. Allison Williams (2017’s “Get Out”) and Logan Browning (Netflix’s “Dear White People”) make this two-woman show captivating as Charlotte and Lizzie’s relationship blossoms and keeps developing in unexpected directions. Once again playing a character who’s a far cry from Marnie on HBO’s “Girls” (Shepard directed twelve episodes throughout all six seasons of that series), Williams has honed such a poised, preppy façade of perfection just ready to crack and has a stealthy, deadpan delivery about her that later calls attention to the many layers within Charlotte. The stunning Browning is as much of a star as Williams, here going through quite the emotional wringer and making her arc involving as Lizzie. Steven Weber also subverts his usual wholesomeness as the young ladies’ demanding cello instructor Anton.

Director Richard Shepard plays with audience expectations like a violin—or a cello?—in never allowing them to predict what kind of film “The Perfection” will keep becoming. Is it a strange concoction of “All About Eve,” “Black Swan,” and “Whiplash”? Is it a sinister, heightened genre statement on the “Me Too” movement? It’s all of the above. Stylishly shot by Vanja Cernjul (2018’s “Crazy Rich Asians”) and making countless uses for a split diopter lens (one of the film’s technical influences to De Palma), the film has a polished, classy look as a counterpoint to the ugliness that unfolds. Even if the narrative relies on the dominoes to fall almost perfectly, plausibility be damned, “The Perfection” rarely hits a wrong note as the bonkers symphony of perverse thrills and catharsis it achieves to be.