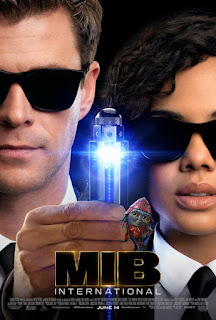 After 2012’s “Men in Black III” felt ten years too late but at least circled back to the spirit of the fresh, entertaining 1997 original about a super-secret government agency fighting alien scum, this long-delayed fourth entry is a day late and a dollar short. Positioned as a reboot spin-off, “Men in Black: International” feels like it was made out of obligation and spit out of a computer. Without wisecracking Will Smith and perpetually grumpy Tommy Lee Jones around, there’s a new duo of Men in Black agents in the form of Tessa Thompson and Chris Hemsworth, but even they can’t do much to prop up this bare-minimum summer tentpole with their charisma and talent. Replacing creative force Barry Sonnenfeld, director F. Gary Gray (2017’s “The Fate of the Furious”) has brought energy to past films, and yet, this sci-fi comedy just goes through the motions with a perfunctory script by screenwriters Matt Holloway & Art Marcum (2017’s “Transformers: The Last Knight”) that makes one realize star likability can’t fully replace smart writing. It’s not that “Men in Black: International” had to change the world or make one think too hard; it’s silly and amiable enough but lacking the personality of even 2002’s much-maligned “Men in Black II” and never particularly funny or clever.

Ever since she was a child and encountered an alien creature in her bedroom while her parents had their memories neuralyzed by two MIB agents, Molly (Tessa Thompson) believes in aliens and wants to search for the truth of the universe. When Molly follows a couple of agents and sneaks into their New York City headquarters, she comes face to face with Agent O (Emma Thompson), who sees her passion and pretty quickly suits her up and offers her a probationary assignment in London. Now “Agent M,” Molly tags along with dashing Agent H (Chris Hemsworth), who once conquered alien species The Hive with partner Agent High T (Liam Neeson) in Paris three years earlier, and as their mission begins with the assassination of alien royalty by The Hive, it turns out there might be a mole within the Men in Black.

Consistent with all of the “Men in Black” movies in one way, “Men in Black: International” begins with the singularly impish score by Danny Elfman and Chris Bacon. Otherwise, the film is just an example of a studio dusting off a recognizable property without anyone involved bringing any fresh spin to it besides putting together a new cast and putting a woman in the black suit. That might count as the only type of progress this film offers, and Tessa Thompson is winning as the wide-eyed and pragmatic Molly/Agent M. However, while it’s nice to follow Molly on her journey to achieving her dream, the stakes never feel high enough to matter and Molly’s arc seems nonexistent. Chris Hemsworth is always charming with no fear of coming off goofy, but his role as Agent H mainly asks him to coast on his magnetic golden-boy persona and even make one self-referential joke about an undersized hammer that proves how viewers would rather watch Hemsworth play Thor again. Though Thompson and Hemsworth had energetic interplay in 2017’s “Thor: Ragnarok” and then again in 2019’s “Avengers: Endgame,” they don’t quite click here, unable to carry over their chemistry or achieve worthwhile banter with this material.

If there is any source of entertainment, it is in Kumail Nanjiani’s riffy voice performance as an alien chess pawn named Pawny, who actually comes off too cutesy at first as the obvious comic relief but grows on one like an adorable puppy and becomes a sweet hoot. Emma Thompson, the only returning player from any of the previous films, sparkles in her all-too-brief screen time as Agent O, while Liam Neeson just looks indifferent to be here as Agent High T and his partnership with Agent H feels too undercooked to register. Rebecca Ferguson finally shows up and squeaks out a few laughs even in a thankless role as arms dealer Riza, Agent H’s former flame, who looks like Sia with an extra arm. Otherwise, the stars’ platonic chemistry is tamped down into blandness, the action is quickly edited and not very exciting, the alien villains are dull, the plot is convoluted with a shrug-worthy twist, and the special effects are no more than fine and never as spectacularly disgusting as Rick Baker’s make-up effects in the previous movies. As a summer blockbuster, “Men in Black: International” is a flat, underwhelming mediocrity that doesn’t reinvigorate the franchise at all and just neuralyzes its audience’s memory as it plays out. More like “Meh in Black.”