The Couple Who Knew Too Little: "Murder Mystery" an amicable lark helped by Sandler and Aniston's chemistry 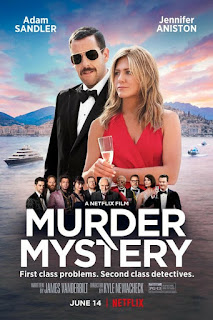 Of all the recent Adam Sandler joint ventures under the Happy Madison-Netflix banner, “Murder Mystery” is a pleasant-enough lark that, for once, resists the Sandman's crass, puerile, often mean-spirited variety of comedy. For one, it’s a frothy riff on an Agatha Christie whodunit, and for two, there is a likable, playful chemistry between Sandler and Jennifer Aniston, much like when he co-stars with Drew Barrymore. Director Kyle Newacheck (2018’s “Game Over, Man!”) and screenwriter James Vanderbilt (2016’s “Independence Day: Resurgence”) have all the pieces for a madcap farce, but the result is more easy-going than side-splitting with more smiles than laughs, which could be counted on one hand.

Frugal NYC police detective Nick Spitz (Adam Sandler) finally surprises his wife, hairdresser Audrey (Jennifer Aniston), for their fifteenth wedding anniversary with a vacation to Europe. When Audrey sneaks into the first-class section on their flight, she meets wealthy and handsome viscount Charles (Luke Evans), and he invites the couple on the yacht of his billionaire uncle, Malcolm (Terence Stamp), who’s marrying Charles’ former lover Suzi (Shioli Kutsuna). Instead of celebrating his nuptials, Malcolm announces that he’s cutting everyone off—including a glamorous movie star (Gemma Arterton), a loud Maharajah (Adeel Akhtar), and a Formula 1 driver (Luis Gerardo Mendez)—from his $70 million fortune, until the lights go out and someone stabs the curmudgeon. Among them is a murderer, and Nick is the detective who knows what to do and Audrey just happens to be a fan of mystery novels, but since they are American strangers, French Inspector Laurent Delacroix (Dany Doon) claims the Spitzes to be the prime suspects.

Even as a diverting romp, “Murder Mystery” is neither as involving as an everyone’s-a-suspect whodunit should be, nor is it ever as funny as one would like it to be, but it’s an amicable time-killer. Matched together after 2011’s spotty, albeit not-terrible, “Just Go With It,” Adam Sandler and the effervescent, comedically nimble Jennifer Aniston do have a workable give-and-take as a working-class married couple in a rut. It is still a shameless vacation to Europe for all involved, but the production values are a step up, thanks to the scenery, and a Ferrari chase through the streets of Italy is capably staged that one gets the sense this could have actually been something more. Faint praise, sure, but “Murder Mystery” gets the job done as something palatable to watch on an airplane without wanting to jump out of the emergency exit.