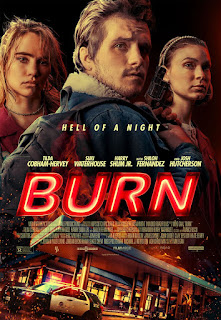 “Burn” is a weirdo heist-gone-wrong thriller set entirely at a gas station that almost works more effectively as a character study. When first-time writer-director Mike Gan stops short of living up to the complexities of his mousy, psychologically unhinged protagonist-cum-antagonist, the film itself ends up going nowhere special or surprising in terms of either plot or character. Without much to cling to or get excited about, there just isn’t much here.

Working the graveyard shift at 24-hour gas station/quickie mart Paradise Pumps, lonely, unstable attendant Melinda (Tilda Cobham-Hervey) isn’t quite right. She is so desperate for a connection with someone that she will snap pictures of local cop Officer Liu (Harry Shum Jr.) when he comes by or burn herself with a  fresh pot of coffee just to feel anything. Not far into their shift, Melinda and her snarky co-worker, Sheila (Suki Waterhouse), are held at gunpoint by Billy (Josh Hutcherson), who’s desperate for cash to pay off a biker gang. As Billy’s robbery doesn’t go according to plan, Melinda tries to keep the mess under wraps, even as she unravels.

Tilda Cobham-Hervey (2018's "Hotel Mumbai") makes Melinda a fascinating, vaguely sympathetic character who’s ready to crack, and she probably finds more nuance than what was given to her on the page. If the viewer doesn’t exactly have rooting interest in wanting her to succeed, she is at least captivating to watch for the entirety. The other performances are more than capable if mostly one-note, although Josh Hutcherson gets to play against-type as Billy, who may or may not be interested in making Melinda the Bonnie to his Clyde. Writer-director Mike Gan trusts his material enough to keep all the minimal action in one location, but he just doesn’t tighten the screws enough or take anything further to turn “Burn” into more than a tepid thriller.