When a Time-Traveler Calls: "Don't Let Go" hinges on affecting performances rather than its rickety logic 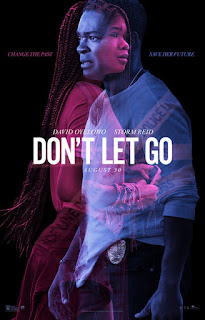 Part time-travel thriller and part whodunit crime procedural, “Don’t Let Go” (formerly titled “Relive” at the 2019 Sundance Film Festival) is quite involving for a long time, as long as one can fully buy into the premise at face value and just go with the less-than-airtight, admittedly confusing logic. Writer-director Jacob Estes (he of 2004’s excellent “Mean Creek”) has a lot to juggle here, driving his story forward with the relationship at its core but also hoping viewers will take a leap of faith with the time-travel plot device. “Don’t Let Go” is the kind of film with enough ambition for itself that it almost works.

LAPD detective Jack Radcliff (David Oyelowo) has a closer relationship with his teenage niece, Ashley (Storm Reid), than he does with his own brother, Garrett (Brian Tyree Henry), who may or may not have fallen back into selling drugs. One day when Jack is busy with desk work, he receives a call from a distressed Ashley that gets cut short. Next thing he knows, Ashley, her parents, and even the family dog have been murdered in their home, and it’s been ruled a murder-suicide. After two weeks pass and Jack has hit rock bottom, he receives a call from Ashley’s cell phone. It is Ashley on the other end, but she is still alive in the past before her murder. In a race against time, Jack must discover who is behind the murder of his family with help from Ashley so he can prevent it from becoming a reality.

2000’s “Frequency” with a hint of 2018’s “Searching,” “Don’t Let Go” is best when hinging on its two characters’ connection and not really the murder whodunit aspect of the plot. From the start, David Oyelowo (2014's "Selma") and Storm Reid (2018’s “A Wrinkle in Time”) have a wonderfully warm and authentic uncle-niece dynamic that gets efficiently conveyed through only a couple of scenes of Jack picking her up from the movies and then taking her to their favorite diner spot. They are each other’s support system. Then, as the film toggles back and forth between the two different planes of the time-space continuum with Jack and Ashley, one searches for answers as to why this is all happening, and yet, that seems to be beside the point. Instead, it’s the logic of the plotting that feels a bit rickety (how Jack gets a do-over at one point doesn’t make the most sense).

If “Don’t Let Go” doesn’t always hold up to scrutiny on a narrative structural level, the lead performances are still affecting and hold one’s attention over the plot mechanics. Alfred Molina and Mykelti Williamson, as Jack’s superior and his longtime colleague, also lend reliable support, while Brian Tyree Henry is squandered as Ashley’s father with a shady past, and her mother isn’t really a character at all. The unique music score by Ethan Gold is also worth a mention. While the film has a lot going for it, it’s hard letting go of what might have been a better film with another pass at the script.