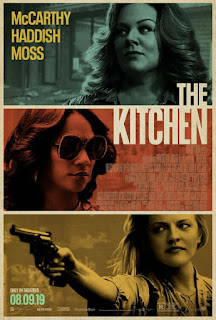 “The Kitchen,” based on the Vertigo graphic novel series, is a hard-edged crime drama set in a traditionally male-dominated world where those married to the mob become the mob. Making her directorial debut, screenwriter Andrea Berloff (2015’s “Straight Outta Compton”) unfortunately runs into challenges of making a gritty story like this work with shifts in tone that don’t always sit well, slapdash story beats, and characters that aren’t drawn as vividly as they should be. On paper, the mere conceit of Melissa McCarthy, Tiffany Haddish, and Elisabeth Moss as mob wives is the major draw here, and for the most part, that idea goes a long way toward smoothing over an underwritten script and haphazard editing. “The Kitchen” is entertaining nonetheless, with three dynamite performances, that the finished product might look a little better than it ought to be, and yet, it's simultaneously never as good as it could have been.

It is 1978 in Hell’s Kitchen, New York City. Kathy Brennan (Melissa McCarthy), Ruby O’Carroll (Tiffany Haddish), and Claire Walsh (Elisabeth Moss) are the three wives to men in the Irish mob. Once their respective husbands, the loving Jimmy (Brian d’Arcy James), the cheating Kevin (James Badge Dale), and the abusive Rob (Jeremy Bobb), are busted by FBI Agent Gary Silvers (Common) during a liquor store robbery, the women are left worried about their financial lives as their men get sentenced to prison for three years and they themselves cannot get jobs. Even though Kathy, Ruby, and Claire are promised to be taken care of by the mob, under the thumb of Little Jackie (Myk Watford) and Ruby’s mother-in-law Helen (Margo Martindale), the allowance they’re given to tide themselves over isn’t even enough to cover the rent. These three realize pretty quickly that they will have to take care of themselves by carrying on their husbands’ racketeering, ensuring protection and security within their neighborhood and having everyone in their pocket, and they’re damn good at it.

In the vein of 2018’s superior “Widows” but nowhere near as elegantly constructed, “The Kitchen” feels half-formed and choppy through the writing and editing processes when it might have benefited from more breathing room. The women’s rise to power happens so fast, as if a string of montages with a rock-ballad needle drop (Fleetwood Mac’s “The Chain,” The Rolling Stones’ “Paint It Black,” Etta James’ “It’s a Man’s Man’s Man’s World”) can cover up the gaps. Scenes are either missing, go on too long, or are so truncated as if they were whittled down to nothing. Supporting characters that the viewer has yet to meet are spoken about and then pop up conveniently out of nowhere. More importantly, the lead characters aren’t all that fleshed out. They all start out as women who are undervalued, but Kathy becomes the brains of the operation, while still having to take care of her two children; Ruby is the ball-buster; and Claire is no longer going to take being knocked around when she learns how to dismember a body, which is played for sick laughs.

Melissa McCarthy is terrific, dominating in another role that utilizes both her dramatic and comedic talents as Kathy, the housewife in charge. Tiffany Haddish is fierce and formidable in a rare straight role as Ruby, who’s been marginalized for not only being a woman but for being a person of color. Elisabeth Moss brings her all to the put-upon Claire, who uses her new knack for bloodlust to take her power back, but her compelling transformative arc from battered wife to cold-blooded killer has little “there” there, with an awkwardly handled romance between Claire and sociopathic enforcer Gabriel O’Malley (Domhnall Gleeson) that feels undercooked, and how the script treats her later does not feel earned. The great Margo Martindale is delightfully withering as Helen O’Carroll, the Mother-in-Law From Hell; Bill Camp is another standout as Italian mob boss Alfonso Coretti; and Annabella Sciorra is a sight for sore eyes in her two scenes as Coretti’s wife, who delivers a rather timely line considering what the actress has gone through in real life.

Writer-director Andrea Berloff never revels in the violence but doesn’t shy away from the viciousness of it, either. Enough care and effort have been put forth to turn the clock back forty-some years, the grungy ‘70s sense of place in Hell's Kitchen looking lived-in and the costume design authentic, even if the film’s overall style is no more than point-and-shoot competence. In the end, “The Kitchen” is not as great as the juicy performances supporting it. Having women instead of men take care of the streets and having someone whacked should have made for an even more affecting and nuanced film than the one this empowerment fantasy is content to be.