"Save the Date" an honest, low-key little indie 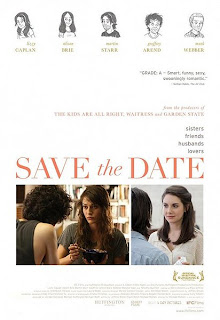 A commitment-phobic young woman, check. A self-absorbed bride-to-be, check. Polar-opposite sisters, check again. "Save the Date" might already seem like it's been stitched together from insipid rom-com movie clichés, but it's more bittersweet and features characters that actually resemble human beings in the way they talk and feel. Naturally directed by Michael Mohan, working from his script with writers Jeffrey Brown and Egan Reich, this well-acted, pleasantly low-key relationship dramedy has enough empathy, truth, and bright performances to recommend it.

Sarah (Lizzy Caplan) and Beth (Alison Brie) are neurotic sisters with different interests. They're both dating two guys in the same band. L.A. bookstore manager and aspiring artist Sarah is noncommital and doesn't believe in marriage, but reluctantly makes the big step to move in with her vocalist boyfriend, Kevin (Geoffrey Arend). Making the ill-timed decision to propose at his musical gig, Kevin finds Sarah in the crowd and gets down on one knee, but she runs out of the venue mortified, breaks it off, and soon moves out of his apartment. Meanwhile, the traditional, practical Beth is planning to marry her own man, Andrew (Martin Starr), so naturally it's all about her. While Beth doesn't want her sister to completely count out Kevin, Sarah finds a rebound in Jonathan (Mark Webber), one of her store customers that observed her public breakup. He seems perfect, but Sarah still hems and haws.

Caplan and Brie winningly click as sisters, but this is really Caplan's movie. Always armed with an acerbic sense of humor, she makes Sarah a likable but indecisive young woman. We've seen this character type before in romantic comedies, where she is portrayed as a selfish harpy, but Caplan finds a delicate balance. As sister Beth, Brie tones down the bridezilla dramatics, even if the character has her moments of pushiness, passive-aggression, and self-absorption. Arend and Starr also showcase what else they're made of. Webber is adorably charming as Jonathan, a marine biology grad student. Melonie Diaz is given limited screen time but catches one's eye as Sarah's art gallery-owning friend.

"Save the Date," despite a narrative that's slim and still not always focused, tells its story at the service of the characters and their interactions (always the best choice) to propel everything. Mohan, Brown, and Reich make sure they never judge the characters—no one is a villain or purely an angel—but treat them as real people whom we can understand and root for. The second half gets a little whiny but recovers so we can still care about these characters and their problems. It doesn't end too differently from "Your Sister's Sister" (a very character-based three-hander), in which there are no definite endings. But, like that mumblecore jewel, this one is a modest, honest minimalist.