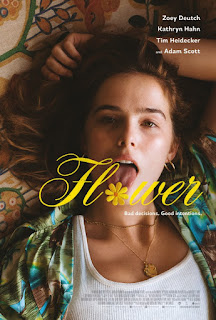 “Lolita” meets “The Bling Ring” meets “Thelma & Louise,” “Flower” is a surprisingly engaging, independently spirited kids-behaving-badly drama with consequences and blips of unexpected sensitivity. A lot of coming-of-agers are about the loss of innocence, but the offbeat story writer-director Max Winkler (2011’s “Ceremony”), son of Henry, and co-writers Alex McAulay and Matt Spicer (2017’s “Ingrid Goes West”) want to tell has the teenage protagonist eventually gaining her innocence back and not judging her in the process. Shaping up to be one of the most intuitive actresses of her generation, Zoey Deutch (2017’s “Before I Fall”) pops as a magnetic, charismatic star and brings her irresistible presence and genuine feeling to a brazen character who is decidedly not a delicate flower.

Profane and free-wheeling, Erica Vandross (Zoey Deutch) is a San Fernando Valley 17-year-old who gives men sexual favors and then blackmails them for cash with her friends (Dylan Gelua, Maya Eshet). It’s all a means to an end, saving up to bail out her father, who’s in jail for robbing a casino, but when Erica isn’t doing that, she’s a normal teen, snapping selfies and frequenting the mall and the local bowling alley. While her mother, Laurie (Kathryn Hahn), has been dating Bob (Tim Heidecker) for a year and has just invited him to move in, she finally meets Bob’s depressed, overweight 18-year-old son, Luke (Joey Morgan), who’s just being released from rehab for his addiction to diet pills. Erica doesn’t adjust to the change too well, but when teacher Will Jordan (Adam Scott), whom Erica and her friends see at the bowling alley a lot, is claimed to be the predator Luke accused of molesting him before being sent to rehab, she plans to extort him for what he did to his soon-to-be stepbrother. "Shaking down a child molester is our moral obligation," Erica says with a sense of validation, but things eventually turn real when her scheme doesn’t go according to plan.

Erica is full of life but not a conventionally likable heroine that the viewer can instantly warm up to and be on her side. She is not very kind and will only put on her charm and charisma if bribed with money, but Erica is who she is and doesn’t care what others think, keeping a sketchbook of all the penises she’s seen and nonchalantly offering Luke a blow job as if it were a stick of gum. With that said, Erica is still human, innately good but complicated and making bad choices out of desperation for a selfless cause. Zoey Deutch consistently walks on a razor’s edge between likable and irredeemable, fearlessly forming a one-of-a-kind creation out of the reckless Erica with her gleefully cavalier bravado and quick-witted energy masking an underlying sadness and fragility. More than anything, Erica remains true to herself and isn’t deserving of punishment, just learning to love someone else.

Beginning as an acerbic, risqué, yet troubling slice-of-teen-life and then morphing into an even darker road movie before ending as a love story, “Flower” surprises in the tonal shifts it makes. Where the film goes from there is a little tidy, but it mostly stays true to Erica and Luke. The rest of the cast is obviously in support of Zoey Deutch’s lead turn, but they all find little nuances where they can, including Kathryn Hahn, whose cool, carefree, yet sweet attitude as Erica’s mother Laurie seems to have been carried over to her daughter; an understated Tim Heidecker, big-hearted but fallible to getting angry as Laurie’s boyfriend Bob; Adam Scott, subverting his affable persona with a tricky role as Will Jordan, who seems like a nice guy but might have a secret to hide after an unseemly accusation; and Joey Morgan (2015’s “Scouts Guide to the Zombie Apocalypse”), who has the clearest arc next to Erica as the very troubled yet sympathetic Luke. "Flower" is a little rough around the edges, but like in anything, Deutch remains endlessly watchable.