Boy Witch: Eli Roth taps into his inner child with weird, spooky, whimsical "House with a Clock in Its Walls" 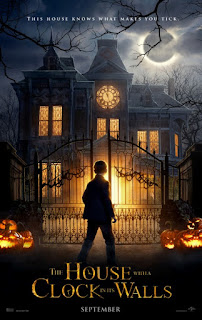 Director Eli Roth—yes, the same Eli Roth who has built a niche career on making ultra-violent films like “Cabin Fever,” “Hostel,” “Hostel: Part II,” “The Green Inferno,” and the recent “Death Wish” update—makes his foray into the family-friendly, PG-rated horror-fantasy realm with “The House with a Clock in Its Walls,” an adaptation of John Bellairs’ 1973 book. Harkening back to fellow Amblin Entertainment productions, the film is a welcome blend of the spooky, goofy, and weird on the order of children’s films from the ‘80s and ‘90s that differentiated themselves from the pack by rarely playing things safe and often placing child protagonists in grave danger. Ghoulish when it needs to be but whimsical and impish in spirit, “The House with a Clock in Its Walls” works as a kid’s Horror-Lite, and that’s meant in the best of ways.

Orphaned after losing his parents in a car accident, goggle-wearing, encyclopedia-packing 10-year-old Lewis Barnavelt (Owen Vaccaro) hops on a bus to live with his kooky, kimono-sporting Uncle Jonathan (Jack Black), whom he’s never met before, in New Zebedee, Michigan, in 1955. Around every nook and cranny of Jonathan’s gothic Victorian mansion is something strange—a stained glass window that animates when Owen isn’t looking, a living armchair, and a giant purple snake with wriggling tentacles locked away—and in the middle of the night, Lewis wakes up to his uncle listening to something in the walls. As he is quickly branded the outcast at school for marching to the beat of his own drummer and living in “Slaughter House,” which is the stuff of an axe-murder legend, Lewis comes to discover that Uncle Jonathan is actually a warlock (don't call him a "boy witch"!) and his uncle’s close friend and neighbor, Florence Zimmerman (Cate Blanchett), is a good witch. Hoping to be groomed into a warlock himself, Lewis first learns the dark history of the house he’s living in: Isaac Izard (Kyle MacLachlan), the late former homeowner and Jonathan’s magic-act partner, has hidden a ticking clock somewhere in the house that could lead to doomsday if it is not found and destroyed. When Lewis tries impressing Tarby (Sunny Suljic), the only classmate who gives him the time of day, he disobeys his uncle’s one rule—do not open the cabinet in the library—and accidentally raises Isaac Izard from the dead.

Venturing into the dark, macabre, and otherworldly, “The House with a Clock in Its Walls” incorporates blood rituals, a zombified Dale Cooper, and a gnarly, bone-cracking body transformation, while nevertheless sustaining a mischievous comedic tone and locating a heart at its center without coming off saccharine. The pacing is initially uneven, taking off and then slowing right back down, but director Eli Roth and screenwriter Eric Kripke (2005’s “Boogeyman”) respect their audience’s intelligence by taking their time to tell the story and capturing our attention with the offbeat characters’ banter and every household oddity. Even as the plot machinations start to pad a pretty simple story, the film springs to life the most in its gleefully unrestrained final act when a roomful of creepy life-sized automatons comes out to play, as well as a bevy of marauding pumpkins that spew their guts, aided by a healthy budget supporting Roth’s twisted imagination.

Sympathetic and appealing, Owen Vaccaro (2017’s “Daddy’s Home 2”) is just right with an earnest get-up-and-go as warlock-in-training Lewis. Immediately endearing the viewer with his gawky lack of athletic ability, mature love for words, and penchant for wearing goggles at all times like his TV adventure hero, not to mention the void he feels without his parents, Lewis may be a kid, but he’s an old soul who eventually finds common ground with his uncle when they agree that they both are the “black swans” of the family. Jack Black and Cate Blanchett are joys to watch on screen together, affectionately slinging barbed insults at each other. Never looking above it all or phoning in material that is targeted more for children, the two of them make such a spirited witchy duo as platonic couple Jonathan Barnavelt and Florence Zimmerman. On their own, Black is endearingly oddball and right in his wheelhouse after playing a version of R.L. Stine in 2015’s “Goosebumps,” and Blanchett has a warm eccentricity about her and brings a crucial amount of pathos once the details of her tragic past are divulged to Lewis.

Unsuspecting families will most likely have no knowledge of Eli Roth’s prior cinematic offerings of backwoods flesh-eating viruses, Slovakian torture chambers, and cannibalistic Amazon tribes, but for those who do will happily discover that Roth is an oddly perfect choice for a children’s horror film. He is, after all, a kid at heart, and "The House with a Clock in Its Walls" gives him the opportunity to recharge his creativity outside of his gory, hardcore impulses and even tap into his sweeter side. Roth can’t always resist his juvenile side, though, as he revisits a pandering gag involving a topiary lion defecating wet leaves three times too many. With that kiddified exception, adults will get a kick out of seeing Cate Blanchett head-butt an evil pumpkin and fend it off with a purple umbrella laser blaster, and the amusing yet unsettling sight of Jack Black morphing into a baby. As a mirthful gateway into horror for kids to eat up, “The House with a Clock in Its Walls” is a fun pre-Halloween treat that effortlessly takes delight in the whimsy but also isn’t unafraid of going dark.