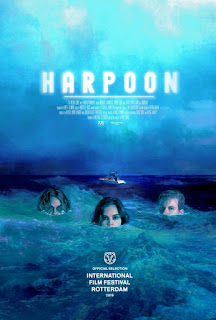 A sort-of “Dead Calm” among friends, “Harpoon” is a coal-black, mean-spirited, thrillingly unpredictable character-based thriller that keeps changing like a severely infected wound without treatment. It’s also scabrously funny and horrifically violent. Writer-director Rob Grant does a lot with a little—it’s just three friends on the open sea, plus a one-man Greek chorus—and manages to turn a toxic friendship between three characters into schadenfreude for the sake of telling a grim tale of betrayal and desperation. Those with a twisted sense of humor should get a wild kick out of “Harpoon,” while others will want to stay on dry land.

Shaggy-haired martyr Jonah (Munro Chambers), trust-fund hothead Richard (Christopher Gray), and referee girlfriend Sasha (Emily Tyra) are a dysfunctional trio. As Jonah is packing up his parents’ house after their deaths in a fiery accident, Richard shows up and, in a regular fit of rage, beats his best friend to a bloody pulp. Richard has jumped to the conclusion that Jonah and Sasha have been sleeping together when, as Sasha explains when coming to stop the fight, they were actually texting each other about buying their friend a harpoon, er, speargun as an early birthday present. When the friends take out Richard’s yacht after the misunderstanding, the motor dies, stranding them at sea. Things go from bad to worse once dehydration and starvation enter the equation.

Sailing into the blackest of hearts and darkest corners of humanity, “Harpoon” finds the right groove in making the viewer laugh in between the winces and gasps. The dynamic between these three terrible human beings is so endlessly watchable, especially as transgressions begin revealing themselves and resentments keep bubbling to the surface. Allegiances also keep shifting, not only between the three characters but between the viewer and the trio of characters. All three actors pull their weight and navigate some pretty tricky arcs within a tight 83-minute film: Munro Chambers is shrewd in finding a range between sympathetic and pathetic as Jonah; Christopher Gray is chilling when his Richard, a real dick, becomes volatile; and Emily Tyra is almost always the smartest person in the boat and the voice of reason as Sasha.

Narration in films can sometimes spell out too much when the characters and the story should do most of the talking, but Brett Gelman’s omniscient voice-over is an enhancement. Rather than holding the viewer’s hand, Gelman’s commentary coupled with his precise cadence is darkly amusing in ways that flesh out this so-called “friendship of history” and jokily comment on seagulls, redheaded superstitions, and the story of Richard Parker. In a nasty little number like “Harpoon” that mounts and mounts until its perfect bad-luck ending, everyone has it coming.