"Crazies" is plenty crazy and a remake done right 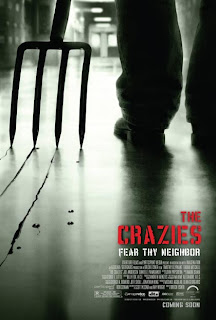 Stop now if this review seems to be overselling the jumpy, exciting, and scary rethink of "The Crazies," producer George A. Romero's own low-budget not-really-zombie horror movie from 1973 of the same name. It's crazier and moves quicker on its feet, proof that remakes can be done right even in a dubious business and that “torture-porn” is so 2007. A plane carrying a bioweapon called Trixie crashes and lets loose a dangerous virus that turns the townspeople, well, crazy of a bucolic Iowa town. You know there's trouble to be had when the town drunk walks onto the field of a baseball game with a shotgun. The gas-masked government plays a threat to the survivors too. Apocalypses and zombies, all the bases here have been covered on and on again before, particularly "Invasion of the Body Snatchers," but whatever.

Timothy Olyphant is ironically cast as one of the sanest people on screen, the town sheriff. He and Radha Mitchell (as his doctor wife) add a levity and empathy to their characters, and Joe Anderson as the deputy does so much right with his flashier role. One quibble: sometimes the characters' actions do rely more on good, 'ol convenience than good, clean logic.

Director Breck Eisner throws those cheap jump-out-at-you jolts a few too many (but will admittedly get you), and his direction is tight and more than assured, stocking plenty of bloody gruesomeness without wallowing in it and leavened where need be with deadpan comic relief. Eisner's DP, Maxime Alexandre, makes crafty use with his framing. And finally, no heavy-handed social/political commentary! Some standout set pieces hit the right scare and giggle beats: the local mortician going crazy on the sheriff with a bone-cutter, people strapped to tables and a “crazy” with a pitchfork, hide-and-seek in an abandoned diner, and one of the most suspenseful set pieces in a car wash that feels like a theme-park ride.

Serving as the rare remake to outdo its master and one hell of a fun, relentless time for those who enjoy a crazy-good scare every now and again, "The Crazies" means business.