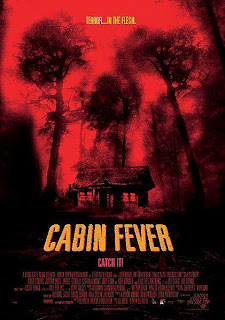 R-rated horror films have reared their ugly heads lately, starting with Rob Zombie's hardcore "House of 1000 Corpses." Whereas Zombie showed flashes of garish creativity, his feature debut was more callous overkill than a fun, scary throwback to '70s horror. On the flip side, we have wet-behind-the-ears filmmaker Eli Roth (also a lover of everything horrific like Mr. Zombie) and his auspicious feature debut, "Cabin Fever." Walking the line of homage and rip-off, this proudly blood-drenched, gleefully disgusting piece of work is an affectionate revival of '70s and '80s backwoods splatter flicks. A gnarly hoot it is.

Maybe you've heard this one before: A group of five brainless, sexed-up college grads rent a cabin in the North Carolina backwoods after finals to party like it's 1980. There's nice and sensitive Paul (TV's "Boy Meets World" star Rider Strong), who has a crush on platonic friend Karen (Jordan Ladd); couple Jeff (Joey Kern) and Marcy (Cerina Vincent), who just want to have sex; and Bert (James DeBello), a loud doofus who's riding solo and can't wait to shoot some squirrels. They have some fun in the woods before a run-in with an infected hermit. From there, the paranoid quintet evades not a psycho killer but a brutal flesh-eating virus of sorts that eventually spreads like the lupus on Seal's face. How's that for a tweak to an old chestnut?

Cynics, rest easy: "Cabin Fever," or Roth rather, is not afraid of slopping on the gratuitous nudity and low-budget buckets of Karo syrup and gore. Looking back, the film might be more gory than scary, but it's plenty horrific. For instance, there is a cringe-inducing leg-shaving scene that will surely make one's own skin crawl, as will the sight of a blonde rotting corpse. Even when Roth has us squirming and being grossed out, there's an inherent creepiness, on a human behavioral basis, when the infected is quarantined, friends turn on one another, and the virus keeps spreading like, well, a virus. Not without a number of oddball, blackly humored yuks and an overall low-budget charm, the film's fun level does begin to pall a bit as therein lies an icky, grotesque movie experience at its core. Even more, this effective but wildly uneven gorefest paints itself into a corner that which it cannot escape (like its doomed characters). This leads to some inscrutably for-the-helluva-it plot developments about hickish townsfolk à la "Deliverance" and a convenience store owner's son who bites customers, does kung fu, and screams "Pancakes!" But have no fear, there's an outrageous, rather twistedly ironic ending joke involving a rifle and a hilarious performance by Giuseppe Andrews as a party-animal deputy.

First-time writer-director Roth, co-writing with fellow novice Randy Pearlstein, is clearly a gore-happy horror junkie, paying respectful homage to "The Evil Dead," "Night of the Living Dead," "The Texas Chain Saw Massacre," and even "The Last House on the Left." It's a weird, crude, dumb-fun midnight movie that could've taken the direction of a David Cronenberg bodily horror parable, but Roth doesn't go that route. After this, he's still one to watch in the future. Exclusively for hardcore gore-hounds, "Cabin Fever" should not disappoint and will give them a taste of old-school, back-shelf horror. It earns a cult following, pronto. 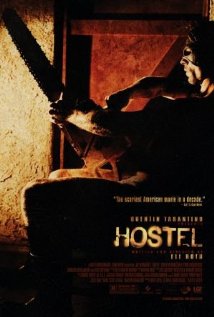 Sadism and torture are all the rage now in horror films, just like when grindhouse flicks were churned out in the 1970s faster than a tub of popcorn at the drive-in. 2005 saw a resurgence of nasty, appreciably R-rated horror films, what with "House of Wax," "The Devil's Rejects," and "Wolf Creek." Now, with a new year upon us and an on-slaught of horror remakes on the way, the intense, nastily inhumane "Hostel" proves "Saw" was just child's play. After giving us 2003's gross, cheeky splatterfest "Cabin Fever," filmmaker Eli Roth had stumbled upon a Thai "murder vacation" website and used it as a springboard for his sophomore effort. What a disturbingly plausible idea for a cautionary horror tale, and it's not too shabby when Quentin Tarantino gives it the seal of approval (note he "presents" the film). Whether it be a pornographically violent slab of the recently branded "torture porn" or ballsy, albeit thinly veiled, social commentary, "Hostel" is a shocking, visceral, no-holds-barred piece of work from a filmmaker with zero cowardice.

The setup is pretty simple: Naïve, college-aged American backpackers Paxton (Jay Hernandez) and Josh (Derek Richardson), along with horndog Icelandic buddy Oli (Eythor Gudjonssen), smoke hash and chase tail across Europe. They're convinced to take a train to a hedonistic hostel in Slovakia that promises them the hottest, most amazing women. It's too good to be true when seductive locals Natalya (Barbara Nedeljakova) and Svetlana (Jana Kaderabkova) accommodate the Americans, until out come the power tools and each of them finds their limbs and lives on the line.

A deceptive twofer, "Hostel" is sado-sex stuff, with the first half being the foreplay, straight out of a raunchy, male-fantasy sex farce not unlike "Eurotrip." There's copious T&A (not tonsils and adenoids) and poking fun at dumb Ugly American tourists. Hernandez and Richardson, looking more and more like Jeff Daniels (which is amusing, considering the young actor played the Daniels counterpart in the wretched "Dumb & Dumber" prequel), seem like obnoxious guys with one-track minds, but as the film goes on, they're more relatable, vulnerable, and sympathetic (especially since one is an asthmatic with a fanny pack and still hung up on his ex-girlfriend).

With flashes of danger in the dank dungeons where all the torture happens, the rest of the film takes a considerable amount of time—45 minutes, in fact—building paranoia and dread out of xenophobic fears before the blood flows, drips, and spews. Then out comes the sex, or a full-blown nightmare of sadistic trauma and gory exploitation. Roth may be passing his film off as having sociological value and the subtext of it all could be read that "flesh-for-fantasy" is a double-edged sword. Women begin as the victims, having their bodies worshipped by gross American/Icelandic men, only to have the men be the victims in the end, but Roth wants it both ways, saying something while having an excuse to be disgusting. And once it does get down to business, the film's brutal, gruesomely gnarly torture will shock your socks off, and primo gore-and-gristle is the reason this movie exists. Not just another schlock-making hack, Roth daringly never cuts away from the money shots, like a power drill penetrating one's skin, but rubs our noses in it, for better or worse, and layers it all with an inescapable pall of doom. On that note, he does effectively manage to disturb and torment like most nightmares do.

Depraved, sick, and unpleasant as it is, "Hostel" isn't a fun film, unless it's one's kind of date movie, but Roth even leavens the torture with gallows humor. For instance, a severed hand stops the torture chamber's Igor-like cleaner-upper from rolling a wheelbarrow of corpses and then a toe about to be snipped off by a bolt cutter transitions into a toenail being painted. Beyond the unnerving urban-legend premise that presents human trafficking and torture as a blood sport, the film does end up spiraling out of control in its last quarter toward a cockeyed happy ending. The "Final Guy" makes a questionable rescue, there's a gratuitous suicide, and a too-convenient but satisfying revenge to all involved. A showdown with the Bubblegum Gang, a violent street gang of juvenile thugs who just request gum, is actually played for sick-puppy yuks.

Bottom line: You have to admit that, for what it is, "Hostel" effectively does its job, which is making you squirm, retch your guts up, cover your eyes…and your Achilles tendons. Whereas Roth made horror buffs squirm, cringe, and giggle all at once with his debut, he goes straight for the jugular with this classic video nasty in the making. Sissies should steer clear.

For a filmmaker to mature, he has to reach into his bag of tricks and show us the full deck of cards he's been dealt. Even after showing us how deliciously inspired his fake trailer of "Thanksgiving" was in this year's double-bill "Grindhouse," writer-director Eli Roth is more content with going back to the well (or torture factory?) for a retread of the horror-hound's "Hostel" in . . . "Hostel: Part II." It's slicker, gorier, more consistent in tone, even more merciless, but it's basically the same film, except now it's ladies' night.

Three American students, Beth (Lauren German), Whitney (Bijou Phillips), and Lorna (Heather Matarazzo), studying art in Rome are lured by a leggy model (Vera Jordanova) to a spa in Slovakia and a cozy little hostel where they can stay. Meanwhile, a gung-ho, thrill-seeking yuppie, Todd (Richard Burgi), and his reluctant, emasculated buddy, Stuart (Broadway performer Roger Bart), pay big bucks as clients to torture and kill them as some kind of sport. As the three girls enjoy the spas, they have no idea that they've already been sold to the highest bidder. The three girls effectively play their stereotypical parts, with German as the responsible leader, Matarazzo as a geeky outsider, and Phillips as the slut of the group.

Better and worse than its 2006 counterpart, "Hostel: Part II" surely ups the ante and pushes the boundaries so far that it often seems Roth is making more of a masturbatory exercise than a scary horror film. The act of signing a contract to kill someone as some sort of sick thrill is given comparatively ample shrift, but it's the only new addition to this "Hostel" formula. Also, with the gender switch, it is much more unsettling to watch vulnerable females being led blindly to their torturous demise. Roth ratchets up the gloom so much, aided by Nathan Barr's doom-laden music score and Milan Chadima's shadowy, grittier cinematography, that the frat-boy humor of the first film's first half is surprisingly missed.

Though well-made and ruthlessly effective, "Hostel: Part II" is practically a glorified snuff film with nothing left to say or show. It's dreary, sick stuff, which is obviously daring filmmaker Roth's point, with its raison d'être of grindhouse gore and no-fun nudity not exactly whetting the appetite of even horror junkies. The man has got chutzpah; watching an electric saw near the pretty face of a girl, gagged but screaming her head off, is just a tease. One slip of the saw and Roth shows us the saw getting stuck in her hair, ripping her scalp clean off. Are we having fun yet?

But wait, there's also that one Grand Guignol that many will be talking about after they witness it. It's so disturbing, so cruel, and so intensely painful to watch the way it (and its paying client) gets off on masochistic violence. Caveat: A gagged, whimpering woman is strung up naked above a bathtub, then teased and slashed with a sickle by a naked older woman in the style of Blood Countess Elizabeth Bathory. "Saw" movies, eat your heart out. Bringing new meaning to the term "bloodbath," it might be the most alternately bravest, repulsive, depressing, and misogynistic deaths in motion picture history.

Otherwise, the wrong-doing clients' get their just desserts by being torn to shreds by hungry German shepherds, decapitated, and getting it where it hurts for a man. These kills are played more for satisfying, over-the-top shock laughs compared to the sad, upsettingly mean-spirited money shots of the innocent females, but does it really matter? You're stuck wondering how the hell "Hostel: Part II" snuck past the MPAA, as if it weren't exploitative or graphically violent enough to nab an NC-17 rating. Were the members out to lunch during the screening? Here's hoping Slovakia doesn't sue so Roth can make his next film, though preferably not in the "torture porn" subgenre.