"Human Centipede" outshocks all the "Saws" and "Hostels" 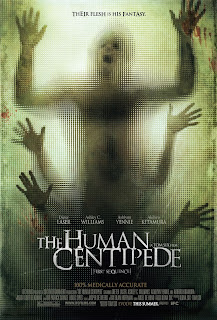 The Dutch sure know how to whip up a repulsively inspired high concept for gross-out horror. Case in point: auspicious writer-director Tom Six's surgical-horror effort "The Human Centipede (First Sequence)," which is about exactly what it sounds, is a squirmy kick. The setup is like a standard slasher picture, and the rest is anything but. Clueless, whiny American party girls Lindsay (Ashley C. Williams) and Jenny (Ashlynn Yennie), wearing too much mascara and touring through Europe, get a flat tire on a lonely stretch of road in the German woods. On foot in the soaking rain, they get lost but soon refuge at the only house for miles. It's a sterile, tastefully chic home, not the redneck cannibal kind, and the resident is Dr. Heiter (Dieter Laser), a renowned surgeon and secret psychopath who drugs the women and straps them to beds in his basement laboratory. He's known for his work of separating conjoined twins, but now he has the perverse fantasy of creating his very own “human centipede.” Yeah, that's right, a chain of humans surgically conjoined, ass to mouth, to create one digestive tract. Only in the movies, people.

Delivering on what it promises, "The Human Centipede" is an unbearably tense, diabolically bizarre and utterly grotesque shocker that's being marketed as “100% medically accurate” (so waste excreted from one person can sustain enough nutrition for another?). Realizing such a crazily sick nightmare, a fate worse than death, the film goes there without feeling gratuitous, which is kind of an incredible feat. Disturbing and shocking is primarily Tom Six's point, but he's obviously a smart and skilled filmmaker to avoid making a merely nasty exploitation pic (or, the in-vogue term, "torture porn"). Six knows his horror tropes, knows how to pick at his audience like a scab throughout, and even sneaks in a xenophobic subtext about fish-out-of-water Ugly Americans who may never leave the foreign land they came to visit. Tension is set at a white-knuckle level, particularly when one of the young women escapes from her hospital bed and nearly makes us think she will make it. The focus is also on the twisted mind of the torturer and not seeing the twisted acts played out in graphic detail, however, that's not to say the film isn't brutal because it is. Although the sight of the “insect” assemblage is indelibly revolting, the horror that plays out is more restrained, suggestive and less glorified than any of the "Saw" or "Hostel" movies. Not all of the plotting holds up, but it's rare to find such a skillfully staged, beautifully shot horror film as this one with a full-bore sense of dread and a gallows—no, make that deranged—sense of wit. Oh, and no cheap “gotcha” scares, either. The despairing conclusion will bring new meaning to the Steve Miller Band's “Stuck in the Middle With You" and leave your mouth agape.

The film is by no means unblemished. A couple of Horror 101 conventions must be checked off so there can be a film, and it takes a while to officially get on the side of the two female characters. On the other hand, never have actors been more pitied or fearless, going through the uncomfortable wringer on their hands and knees in the foulest of positions. Ashley C. Williams and Ashlynn Yennie sure can convey an intensely emotional state with all the crying and screaming they're asked to do, too, but it's Dieter Laser's sinister, sadistically loony performance as the God-playing mad scientist that is the drawing card. His Dr. Heiter will undoubtedly go down as one of the most chillingly intimidating movie villains since Anthony Hopkins' Hannibal Lecter. Carving a spot for itself at the top of "can-you-top-this" films for only the strongest of stomachs, "The Human Centipede (First Sequence)" is not going to be everyone's cup of tea. By the title alone, it will inspire curiosity and be talked about for a while, but this is not for wimps. And, since the film's subtitle is "(First Sequence)," it's not hard to guess that Tom Six already has a second sequence in the works, our ballsy filmmaker already claiming it will make this first part look like "My Little Pony." You've been warned, so chalk it up to a test of your bravery.