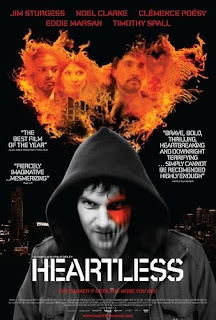 In director Philip Ridley's stylishly creepy and bizarre horror-art effort "Heartless," timid London photographer Jamie (Jim Sturgess) leads a withdrawn life due to a heart-shaped birthmark that covers half his face and the decade-ago death of his biggest supporter, his father (Timothy Spall). Just as extreme gang violence is escalating in his neighborhood, he starts seeing demons behind the black hoods and ultimately he's led to a Satanic figure named Papa B (Joseph Mawle), who tells him chaos is needed to create man. Papa B offers to rid Jamie of his facial stain if he commits a few illegal (and immoral) acts. Pretty soon, Jamie is falling in love with a lovely model named Tia (Clemence Poesy) and Papa B's deal goes too far.

A take on the Faustian legend, "Heartless" is ambitiously crafted without being pretentious and with some of the most indelibly disturbing images, including hallucinations and a murder involving Saran Wrap. The film also incorporates standard but effective "boo!" jolts that'll make you jump and a sense of humanity and feeling from Sturgess's empathetic performance. Towards the end, Spall's father character shares a touching flashback moment with his son. Ridley stages Jamie's rough neighborhood as a hidden inferno with shadowy, melancholy tones. Though only given one scene, Eddie Marsan is hilariously menacing as Papa B's evil minion known as the "Weapons Man." Though outlandish often in the extreme, "Heartless" is a consistently intriguing cautionary horror tale that, for once, actually has heart.