"Next Three Days" too loosely paced but well-crafted 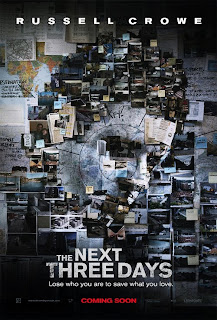 A prison-break drama-cum-thriller like Paul Haggis's "The Next Three Days" should be tight and fast, but it's loosely paced and takes too long. Remade from a 2008 French thriller, "Anything For Her" (or "Pour Elle"), "The Next Three Days" won't ace a plausibility exam, but the moral issues are compelling and it all becomes an entertaining-enough ride.

Russell Crowe plays John Brennan, an average, mild-mannered Pittsburgh college professor, and his wife Lara (Elizabeth Banks) is arrested on murder charges for the death of her boss. John knows Lara did not commit the crime, but there's interesting evidence that points to her (she was there, her fingerprints on the murder weapon, and the blood on her coat matches the victim's). Not about to live without his wife behind bars and his son, Luke (Ty Simpkins), to grow up without a mother, he becomes obsessed with getting Lara out of jail.

Writer-director Haggis always has a socio-political stance in his work, but "The Next Three Days" doesn't lay on its themes of female power, broken justice system, and moral conundrums, too thickly. Getting better as it goes along, Haggis's script turns John into Charles Bronson: you don't really buy into the turn he makes and things he does when looking desperately for cash and forged passports. Lara's trial is completely bypassed in the film's choppy first half, and the movie doesn't know what to do with the son, who's more of a prop dropped off from house to house and doesn't really show emotion towards his mom when he does see her.

Crowe is fine as this silent-type Everyman who will stop at nothing and becomes an unlikely man of action. Banks is effective as the wife and mother serving time in the clink, initially bringing an ambiguity to the role (is she really innocent?) and makes the anxiety of never seeing her son again convincing. Liam Neeson is juicy in his one scene as a jail expert. And it's nice to see Brian Dennehy who speaks volumes without words as John's father.

Though filled with more coincidences than it needs, the movie's final third is an exciting and well-crafted chase that goes from a hospital to a car chase to a suicide attempt to the zoo and to the airport.