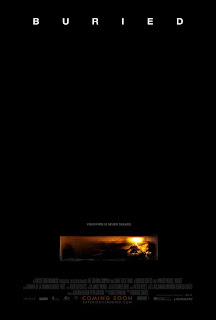 Ryan Reynolds is buried alive underground in a box for 90 minutes and no one can hear him scream. Now there's a high-concept idea for a movie. In "Buried," Reynolds plays Paul Conroy, a contract truck driver in Iraq. Waking up and realizing he's been buried, he only has a cell phone, a Zippo, a couple glow sticks, and a flask of water. All the necessary tools to escape, right? It's harder than it looks. His captor calls him, telling him that he needs to cough up a $5 million ransom or it's game over. Paul's phone battery is gradually draining but contacting someone is his only chance to get out. He struggles to calm down but he's losing oxygen. And he's in a frickin' box. In the ground. Can you just feel the claustrophobia?

The neat opening titles sequence owes its next born to Hitchcock, classic in style and music. Then we get thirty seconds of darkness and silence, soon interrupted by gasping. Being set entirely within the confines of a box, "Buried" is a nerve-racking, tightly crafted “stunt” exercise. Props goes to Reynolds for carrying the load, and of course Spanish director/editor Rodrigo Cortés and cinematographer Eduard Grau for keeping it visually interesting. Lighting and camera placement are stylishly varied to make “buried alive” feel cinematic without losing its confinement, even from above the coffin (while actually still being underground). Aiding Cortés's appropriate pacing, screenwriter Chris Sparling's script denies repetition by always adding another plausible conflict inside the coffin, whether it be via a phone conversation or an unwanted guest that joins Paul.

Reynolds is at his most raw, with stubble, sweat, dried blood, and grime against his perfectly whitened choppers. He expertly conveys the fear, anger, and frustration of the situation. We're buried and suffocating too, right there with Reynolds. Given the conclusion that'll leave you breathless nonetheless, the emotionally grueling experience adds up to less than you'd hope. "Buried" still grips and drains you, which is no small feat for such a hermetically sealed film.