"Horrible Bosses" could have been meaner but ace cast earns laughs 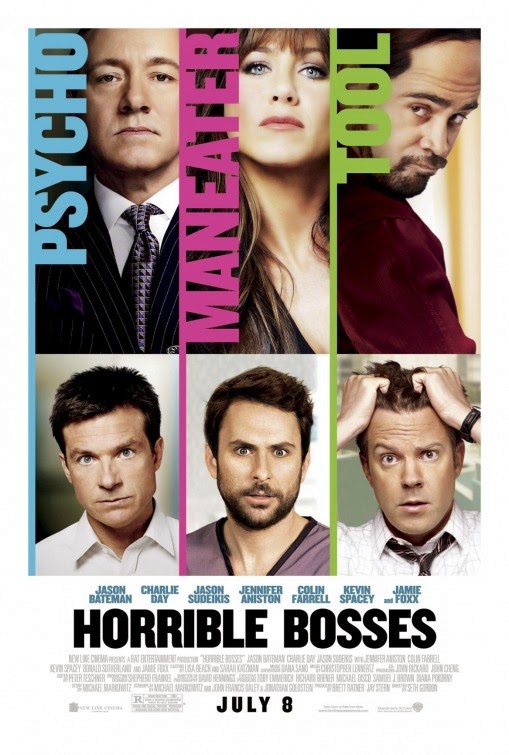 Ever wanted to kill your boss? Hollywood comedy screenwriters probably feel the same way sometimes. "Horrible Bosses" could be compared to a male revenge-workplace-fantasy like "9 to 5," "Ruthless People," and "Office Space," but if only it went in even more for the kill. Still, when a salty, mean, funny big-studio black comedy like "Horrible Bosses" actually lets loose and is brazen about its own meanness, that's cause for a celebration. Nick (Jason Bateman), Kurt (Jason Sudeikis), and Dale (Charlie Day) hate their jobs because their horrible bosses make their lives a living hell. Nick is tired of "taking shit" from his financial firm's president, Dave Harken (Kevin Spacey), who's so mean he kept Nick from seeing his Gam Gam's deathbed. Skirt-chasing chemical company manager Kurt now has to report to the cokehead S.O.B. son (Colin Farrell) of his late boss (Donald Sutherland). Though it seems like nothing to cry about, dental assistant Dale endures sexual harassment from a sexually predatory dentist, Julia Harris D.D.S. (Jennifer Aniston), as he remains faithful to his sweet fiancee (Lindsay Sloane). While getting together for a few brewskies, the three buds joke about killing their bosses and the more horrible work gets they actually decide to go through with it. At a shady bar, they meet a hired gun, Dean "Motherfucker" Jones (Jamie Foxx), who asks for a hefty price to be their murder consultant. Needless to say, the three dorks bumble their homicides.

As a lot of recent raunchy, R-rated comedies this summer is putting out there, like "Bridesmaids," "The Hangover Part II," and "Bad Teacher," it's fun watching identifiable stars misbehave. The pitch-black, dark-hearted premise is put over the top but never delivers its full potential for horrible nastiness. Whatever, it still inspires lotsa gleefully bitter, politically incorrect belly-laughs in all the right places. There's the suspicion that director Seth Gordon (2008's "Four Christmases") wasn't given the green light to push it further, but clearly he encouraged his well-chosen cast to do some improvisation that suits the film's shaggy pacing.

Bateman, Sudeikis, and Day are a dream team, like our contemporary Three Stooges, playing straight men to the over-the-top caricatures around them in their respective workplace. Bateman is playing his usual worry-wart voice of reason; Sudeikis gets to play a smarmy playboy; and Day is the standout, adorably manic and squeaky like a hamster. Watch Bateman and Day bounce off the walls in a cocaine joke reminiscent of "Annie Hall." The "horrible bosses" don't really get out of being one-dimensional punchlines, but the actors playing them make lemonade out of lemons. Spacey could play a corrupt corporate psycho in his sleep (see his horrible boss in 1994's black comedy "Swimming With Sharks"). Farrell, barely recognizable with that beer gut and horrible comb-over, lets himself go way out there, but there should've been more of his tool of a boss. Totally upending her good-girl image and having a blast, a smoking hot Aniston gets to play with the boys and deliciously vomits so many naughty words that you've never heard out of her mouth before. Foxx makes the most of only a little screen time as "Motherfucker Jones" whose profane name is put to hilarious use and his former felony is made a left-turn surprise. Julie Bowen hits her mark as Dave's polygamous wife but given less things to do and say than what she's truly capable of.

Written by Michael Markowitz, John Francis Daley (who played geeky Sam on TV's beloved "Freaks and Geeks"), and Jonathan Goldstein, the script really lets the three leads and the three bosses shine from their asides and interaction together. Their characters don't have lives outside of the plot, but this is a farce after all, not a character study. There's a smart shout-out to Hitchcock's "Strangers on a Train" confused with Danny DeVito's spoof "Throw Momma from the Train," and a clever running gag with a new navigation operator named Gregory. While not as uninhibited as it could've and should've been, "Horrible Bosses" is an enjoyably dirty-birdy, blatantly stupid summer comedy that makes you bust a laugh and hope the A-hole bosses get bumped off.