Cheap "Creature" from the DVD bin 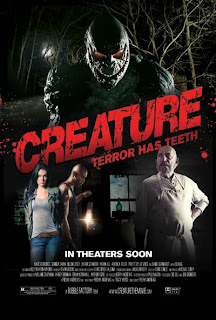 "Creature," a very low-budget horror movie, looks like it has all the makings to be another "Hatchet," a gruesome good time that could be seen playing at the drive-in back in the 1980s. But looks can be deceiving. That 2007 swamp-set throwback was B-movie fun with gobs o' gore and bonus humor. This one isn't. Production designer Fred Andrews makes his writing-directing debut and inscrutably earned a nationwide theatrical release for "Creature." But it's little more than straight-to-DVD fare and a depressing waste of budgetary resourcefulness, gory prosthetic body parts, and female nudity.

Before the title comes up, a young woman bears it all for a full-frontal and takes a dip in the gator-infested swamp, for no reason at all, other than to become the titular creature's lunch. She should've known the movie's tagline: "Terror Has Teeth!" Cue the main course when an SUV full of three young couples—hyper Oscar (Dillon Casey) and his flirtatious sister Karen (Lauren Schneider), photographer Emily (Serinda Swan) and her Navy SEAL brother, Randy (Aaron Hill), and the siblings' significant others, brawny black guy Niles (Mehcad Brooks) and Southern belle Beth (Amanda Fuller)—makes a pit stop at a cruddy, gasless gas station in the Louisiana swamps. It's run by inbred hillbillies and Chopper (Sid Haig), who tell these damn city kids about the local legend of a half-man-half-alligator creature known as Lockjaw that still, to this day, lurks around the "House That Grimley Built." Naturally, the kids dare to check the house out and set up camp. Everyone but them knows this is a bad idea.

While it has the classic setup for a get-what-you-pay-for slasher pic with a swamp thing, "Creature" sells itself short. Besides some bi-curious girl-on-girl action, no such luck for blood-thirsty horror fans. The feeding-time fodder is made up of nitwits, the Horror 101 hillbillies are obnoxious and never creepy, the creature poses as much threat as a buzzing fly, and the kills are moderately gory but routinely executed. What's more, the movie is only 92 minutes and feels much longer with its sludgy pacing. A better-deserving Haig tries his best to rekindle the twisted, over-the-top icon of Captain Spaulding, and Pruitt Taylor Vince (!) mumbles and stomps around as the local fool. Out of the younger cast, Swan is the most appealing of the girls and Brooks is decent as the token black jock, the hero for once.

As if the creature mythology wasn't already nonsensical, Andrews and Tracy Morse's script gets less coherent from there. By the time bayou worshippers readily appear and disappear for a big sacrifice and inane plot twists about keeping-it-in-the-family incest roll around, you know this isn't intentionally inept filmmaking. The big showdown between the survivors and Lockjaw is lamely set up in choppy slow-motion and then strangely shown off-screen inside a sinkhole. Since "Creature" plays things straight and can't even get that right, it makes a lot of other bad B movies seem fun by comparison. Where's Swamp Thing when you need him?