DVD/Blu-ray Reviews of "Winnie the Pooh," "Bellflower," and "Beginners" 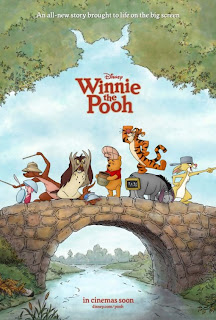 Light as a red balloon and sweet as a pot of hunny, "Winnie the Pooh" is wonderfully and irresistibly charming. What it's not is what makes it that much more of a delight: there is no distracting celebrity voice work or of-the-moment pop-culture references crammed into the story, and no 3-D glasses are required to "amplify" the magic. This new "Winnie the Pooh" is only a little over an hour, so you won't have to grumble "Oh bother," and will leave you wanting to spend more time with the tubby little cubby all stuffed with fluff.

From the bedroom of young Christopher Robin (Jack Boulter), Winnie the Pooh and friends are stuffed animals that spring to life in the stories of their owner's imagination. One morning in the Hundred Acre Wood, Pooh (voiced by oldie Jim Cummings) wakes up to his tummy rumbling and off he goes hunting for more honey. His "very important thing to do" turns to helping a friend out when Eeyore (Bud Luckey, filling in for Peter Cullen), the chronically depressed donkey, has lost his tail. Christopher Robin devises a contest that whomever can find a replacement tail for Eeyore will win a pot of honey. They try a great many things, including a cuckoo clock, that red balloon, and an umbrella, but none of them work as well as the real thing. Amidst all of this, Pooh and friends (Eeyore, Piglet, Tigger, Kanga, Roo, Rabbit, and Owl) misinterpret a misspelled be-back-soon note Christopher leaves as being captured by "The Backson," a supposedly ferocious, mischievous creature, so they decide they'll capture it and save their human friend. Along the way, Tigger the hyper tiger (Cummings again) tries teaching Eeyore how to be a Tigger Two; the arrogant Owl (howlingly played by Craig Ferguson) talks a lot of intellect and wisdom; and meanwhile, Pooh and the always-prudent Piglet (Travis Oates) set up a trap for "The Backson" in the form of a picnic.

Full of respect and adoration for the source material, directors Stephen J. Anderson and Don Hall bring us back to the gentle, nostalgic charm and whimsy of A.A. Milne books and E.H. Shepard's illustrations. Not only is the classic hand-drawn animation beautiful as ever, but the beloved characters are able to break the fourth wall again. As John Cleese narrates the storybook pages, Pooh and friends move between the Hundred Acre Wood and the actual pages that tell their story, walking atop sentences and tumbling over letters.

Cummings endearingly voices Pooh as the lovable bear with stuffing for brains that we've come to love and adore. Zooey Deschanel croons the introductory song "Winnie the Pooh" and "A Very Important Thing to Do," which are pure magic, and Robert Lopez (Tony winner for Broadway's "Avenue Q and "The Book of Mormon") wittily co-wrote the new songs. The uncomplicated story might make your tumbly rumbly from it being little more than one big misunderstanding, but come on, it's "Winnie the Pooh," a joy that only cynics will find to be too twee. Not only directed to small tikes but adults as well, "Winnie the Pooh" is really, truly a timeless movie for all ages, and that's not just a marketing saying that usually means poo. 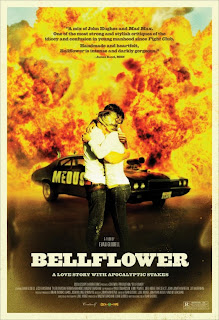 For a dark, angsty-twentysomething indie, "Bellflower" is pretty much the coolest, most daring and arresting mumblecore/grindhouse pre-apocalypse film ever made. Evan Glodell, the multi-hyphenate filmmaker, not only wrote, directed, co-produced, co-edited, and stars in his audacious feature debut, but built the camera with his own hands. Even for a scrappy film with a budget of just $17,000, it's a technical and storytelling achievement, and you have to admire Glodell's scrappy, resourceful spirit. But whether you love or hate this burning roller coaster of love, you certainly can't ignore it.

Directionless best buddies, Woodrow (Glodell) and Aiden (Tyler Dawson), live in a dumpy Southern California house on Bellflower Street and spend their waking days drinking and smoking. In preparation for their imagined apocalypse, the two also construct a flamethrower and a "Mad Max"-style muscle car called "The Medusa" that throws flames out the back. After attempting to go up against a wild, buxom blonde named Milly (Jessie Wiseman) in a cricket-eating contest at a bar, Woodrow and her hit it off. On their first date, she wants him to take her to the cheapest, dumpiest place, so on a whim and with lots of shots from a whiskey dispenser in his green Volvo, they set off on a road trip to Texas. Woodrow and Milly really like one another, but when he asks her to be his girlfriend, she tells him she'll end up hurting him. Milly probably shouldn't betray a guy with Lord Humongous-inspired aspirations and a homemade flamethrower in the garage, as their crazy, stupid love leads to an apocalypse. 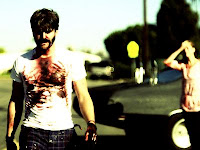 We know this hunky-dory love affair won't last, as reverse-motion flashes of the extreme and the violent open the film as a foreboding, but how it falls apart is what makes "Bellflower" fevered, gripping, and shocking. It might be quibbling to say that the amount of time Glodell's slacker characters spend creating their gadgets could be spent on finding jobs, which they don't seem to have, and some of them (or maybe all?) can't even afford to pay rent but can somehow come up with an endless supply of beer, liquor, and cigarettes. But hey, there's an apocalypse a'comin in these dudes' heads, so why not live up their twenties until the party is over? The point is, we care what happens to these characters, even as brutally tragic circumstances pile up and their states of mind crumble. Glodell is a less natural actor than his unknown co-stars, but as the film goes along, there is an intensely emotional effect from Woodrow's heartbreak and male insecurity that Glodell personally conveys from the heart. As Aiden, Dawson is charismatic as hell, and his lifelong camaraderie with Woodrow is so believable. The engaging, fresh-faced Wiseman was born to play Milly, a spontaneous, cool chick with a don't-mess-with-her edge.

The unpolished production values call attention to themselves, but in a stylishly motivated way, from the grungy, dirt-caked visual palette and blazed, hypersaturated colors to the hypnotic synth-music score. Aside from one sloppy editing slip—Woodrow and Milly are back to driving in his car even after they've just traded it in for a bike in the last scene—"Bellflower" is very directed, and directed well. The film is so alive and forceful it's capable of combustion, and Glodell is one filmmaker to follow and see what he'll do next. Someone give this bro a follow-up project pronto. 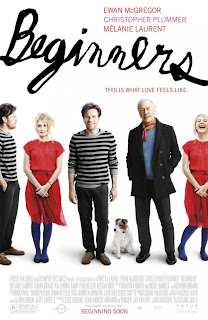 "Beginners" might have seemed self-consciously cutesy in the wrong hands, but it has a sincerity and an optimism, tinged with moments of perceptive emotional truth grounded in loneliness, love, and the comfort in one's own skin. Oliver (Ewan McGregor) is a 38-year-old graphic designer whose father, Hal (Christopher Plummer), turns 75, finds out he has terminal cancer, and then tells his son he's gay after 40 years of marriage. When attending a Halloween party with his artsy-fartsy co-workers, Oliver meets cute with a flirty, down-to-earth free spirit named Anna (Mélanie Laurent), he dressed as Sigmund Freud and she as a vagabond. They spend their first sort-of date in a hotel room, nodding and communicating through a notepad because Anna says she has laryngitis. Through this relationship, he thinks back to the time spent with his father, as the film jumps back and forth in time. Just like Hal is now ready to live his life out of the closet, Oliver realizes he's a beginner himself when it comes to a lasting romantic relationship.

For the most part, writer-director Mike Mills (2005's "Thumbsucker") handles "Beginners" with a self-effacing style but in tandem does employ some directorial quirks, like a doctor telling Hal his cancerous lung mass is the size of a quarter, so we get still images of quarters and then dimes, nickels, and pennies. There are also amusing, crowd-pleasing subtitles for Hal's dog Arthur that Oliver inherits, as well as fast, narrated photo montages of what objects and people look like in life. Though some of it's gimmicky, he always gets the tone right, balancing the humor and emotional heft. McGregor conveys so much relatability and feeling, and an old lion exhibiting so much gravitas and vulnerability, Plummer is wonderful as Hal, who's never treated as a gay stereotype. French actress Laurent (such a striking discovery in Quentin Tarantino's "Inglourious Basterds") is disarming and lovely. The job of Anna is mostly being a catalyst for Oliver's hopeful beginnings, but Laurent still gives her interesting shades.

Their romance has the quirks of most indies, but it's actually sweet, romantically thrilling, and goes deeper once Oliver tells Anna about his father. At one point, the couple rollerskates through their hotel lobby and room floor with Gene Austin crooning on the soundtrack. The flashback scenes with a younger Oliver (Keegan Boos) and his bohemian, half-Jewish mother Georgia (a sad, offbeat Mary Page Keller) are great, warm and touching, as they share an understanding. And the Most Adorable Co-Star goes to the Jack Russell terrier named Cosmo as Arthur, displaying much personality and warmth . . . and that's without pushy reaction shots. Mills based the story on his own life—his father coming out at an old age and just living his life—but "Beginners feels both personal and universal. Sensitive, tender, and genuinely sweet, it's the kind of movie you want to hug.