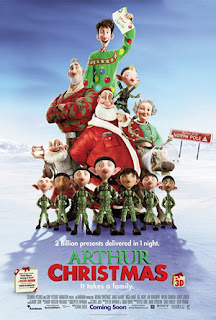 Fans of Aardman Animations' claymation stars Wallace and Gromit will be chomping at the bit for another claymation effort. But "Arthur Christmas" is actually the studio's second step into computer animation (following 2006's "Flushed Away"), and holy Christmas, is it not just the most adorably cozy stocking of yuletide cheer? Joined with Sony Animation, Aardman has made a Christmastime gem to unwrap every 25th of December with your Rankin/Bass TV specials and annual airing of "How the Grinch Stole Christmas!" 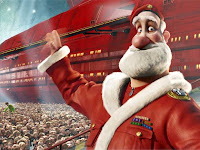 Over at the North Pole, delivering presents to the children on Christmas night is like an efficient well-oiled machine, but a sleigh of reindeer isn't so modern anymore. Malcolm "Santa" Claus (voiced by Jim Broadbent) relies on his elves and his son, Steve (Hugh Laurie), a strapping, cavalier drill sergeant in charge of the ops on Santa's spaceship. The youngest son, big-eared, big-schnozed Arthur (James McAvoy), answers letters from the children all over the world, but gets no credit for his big heart. Not only do his puffy slippers and loud Christmas sweater make him stand out like a sore thumb, but Arthur is a klutzy bull in a china closet wherever he goes. Even Dad thinks Arthur is a "puzzle." After all the night work is seemingly finished, and Santa retires to bed, it's discovered that one present (a pink bicycle) was overlooked and left behind. But Arthur won't let one child (Gwen from Cornwall, England) wake up to no present from Santa come morning, so 136-year-old Grandsanta (Bill Nighy) convinces his bumbling grandson to make his Dad proud. And it's up to Arthur to save the day!

As cartoon shorts are usually the teasers before family-oriented films, "Arthur Christmas" is preceded by a tone-deaf Justin Bieber music video with teenage pop star and Michael Jackson-inspired back-up dancers crooning "Santa Claus Is Coming to Town." Luckily, "Arthur Christmas" is such a charmer that you forget about the introductory bubblegum nightmare. Director Sarah Smith and co-writer Peter Baynham retain a distinct British sensibility for their universal story of Father Christmas that their festive, witty, and beautifully designed film is like a present from Pixar but with cockney accents. The opening sequence gets off on a frantic foot, playing out in "Mission: Impossible" fashion, as Santa and his commando elves go on their operation to deliver presents to all the children, even running into a Code Red alert with a "waker." Might it be more consistently clever than laugh-out-loud funny, it will still be hard to knock that grin off your face. Little visual details are offbeat and creative, like the "product placement" of the HoHo 3000 Cell and Steve's goatee in the shape of a Christmas tree. And two oddly progressive but nicely liberal touches: Bryony (Ashley Jenson), the wrapping elf that tags along with Arthur and Grandsanta in the sleigh, has a pierced eyebrow and a blonde streak in her hair, and two boyish elves appear to be kissing.

Arthur's quest gets a smidge repetitive (with stops in Tanzania and Mexico), but there's a disarming wit that's above and beyond the creative laziness of pop-culture references. Even the vocal performanes are wonderfully perfect and never distracted by star-stuffed casting; Broadbent and Imelda Staunton are quite endearing as Mr. and Mrs. Christmas, and Nighy is very funny and expressive as nutty Grandsanta. Though the term 'classic' is always assumed to mean old, "Arthur Christmas" is the new and fresh kind of classic for the Christmas season.