Tart "Young Adult" gets its legs from Theron's shrewd work 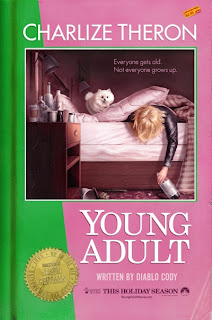 Feel-good message movies are such a dime a dozen in the mass market that you just beg filmmakers to cut the bull. So when an acridly funny, unforgiving studio comedy like "Young Adult" comes along, it's like a breath of fresh, bracingly bitter air without the warm and fuzzies. Screenwriter Diablo Cody and director Jason Reitman, in their second joint effort (the first being 2007's winning "Juno"), take a conspicuously subversive and daring risk in making it easy to hate Charlize Theron. Well, not Theron herself, but her train wreck of a character, Mavis Gary. A lead character, like the one Cody has created, mustn't always be perfectly likable and charming as all get-out as long as we understand what makes her tick. In an easy, less tricky movie, Mavis would apologize for her actions, and so would the filmmakers. Even by the time the film is over and you're walking to your car, when Mavis will lose her young-adult mentality still remains to be seen. However, like in real life, people don't always change in a course of ninety minutes, or at all. So why even have your nasty protagonist learn Important Life Lessons 101? Redemption is so high school.

Thirty-seven and divorced, Mavis Gary is still that prom-queen mean girl everyone hated in high school. Now, she's ghostwriting the last installment of her once-popular YA book series called "Waverley Prep." Each morning in her Minneapolis apartment, she schleps out of bed hung over to chug a two-liter bottle of Diet Coke and get started on her writing. When she receives a forwarded email that announces the newborn baby girl between her high-school beau, Buddy Slade (Patrick Wilson), and his wife, fellow classmate Beth (Elizabeth Reaser), Mavis packs up her accessory Pomeranian named Dolce, and returns to her small hometown of Mercury, Minnesota, to rekindle the fire. She's convinced Buddy must be miserable in the married-with-children life, so she makes it her mission to wrench him away from his family. Once she gets to town, Mavis runs into Matt Freehauf (well played by Patton Oswalt) at a bar. They never hung out in the same social circle, but Matt shared a locker next to hers. She only remembers Matt as "the hate-crime guy" because he was gay-bashed, even though he was straight, and since then suffers physical disabilities from a cruel bullying accident. As Mavis tries throwing herself at Buddy, Matt becomes her shoulder to drink on, as dwelling in the past makes her come off delusional and manipulative. Everyone else in Mercury pities Mavis when she expected to get envy from being a big fish in a small pond. Even the ex-prom queen learns that you can't go back home.

Tart and bittersweet, "Young Adult" is like watching a reality TV show, albeit with more substance, where characters say exactly what they're thinking and their honesty gets layered with awkward, cringe-inducing discomfort that makes us chuckle. With her two previous scripts, "Juno" and 2009's unfairly maligned "Jennifer's Body," being set in high school, it wouldn't be a delusion to say screenwriter Diablo Cody must still be stuck in high school. So are some of her characters, but in a way, this is a step forward. Putting her stylized "teenspeak" lingo on hold (aside from Mavis' coined term "Ken-Taco-Hut"), the wicked snark in "Young Adult" is still all Cody. You always know you're in capable hands when a writer sheds insight into her subject with a quick, spiky wit and no sweetened chaser. Consistently proving his strengths as a director with his three great previous features, Reitman's grounded direction is a nimble counterbalance with Cody's dark writing.

While Juno MacGuff was the smartest girl in the room, Mavis Gary is the meanest. An inherently unlikable person, she is callous, selfish, self-absorbed, self-loathing, pathetic, and in complete denial. She thinks babies are boring, neglects Dolche in her hotel room for most of her visit, and hates Beth Slade. In other words, she's completely human with a fair share of personal issues. Mavis is also a depressed drunk with a "whatever" attitude. She won "Best Hair" back in the day, but now rips clumps of it out of her scalp and wears hair extensions. In one moment, where Mavis preps her face with foundation and lipstick, Cody admirers won't help but be reminded of a similar scene with Megan Fox's Jennifer in "Jennifer's Body." Both characters see their own sadness in the mirror but hide their inner monster behind a make-up veneer. Not since her fearlessly raw and powerful turn in 2003's "Monster" as real-life serial killer Aileen Wournos has Theron really registered and owned such a juicy part. Though not having to de-glam herself with weight gain and make-up, the former model-turned-Oscar winner still disappears and sinks her teeth into another unsentimental, challenging character role. Not a trace of the actress' beauty is removed, but this is a shrewd, gutsy, hilarious performance, as Theron finds what makes Mavis such a piece of work and gives her shades of sympathy without sweetening her. When she finally expresses to Buddy that they should run away together to "the mini apple" and Buddy reminds her that he's a married man, it's clear how deluded Mavis really is when she responds with "We can beat this thing." Without being a cartoon, Theron is That Girl.

Matt is the audience and the voice of reason, calling Mavis out on her insanity. Having voiced the mousey voice in 2007's "Ratatouille" and showcasing his dramatic chops in 2009's "Big Fan," the doughy Patton Oswalt is given a real, meaty role. He's subtle, heartbreaking, and often despicable himself. And Theron and Oswalt complement each other so well that their relationship becomes the most interesting. Wilson, as Buddy, is fine, but he's relegated to playing the bland, settled husband and father past his "football player" glory days. Reaser is more surprising as Beth, a woman so nice and selfless that she teaches special-education kids, but her performance is never cloying and a complete contrast with Mavis. She's even the drummer in a dorky-cool rock band called Nipple Confusion, made up of the fellow moms that went to school with Mavis and think she's still a "psycho prom queen bitch." A '90s song, "The Concept," by the alt rock band Teenage Fanclub (covered by Nipple Confusion) reveals her arrested development and also figures into Mavis's obsession with Buddy, as she plays the cassette tape on a loop.

Outside of Mavis and Matt, Cody's handling of supporting characters is less well-drawn. Most of them just feel like boxed-in decent types of Small-Town America that don't always react realistically to The Mean Girl's behavior, but the film belongs to Mavis and Matt. By the end, there is an eye-opening moment for Mavis with Matt's sister, Sandra (Collette Wolfe), the only one in town to actually idolize her. One thinks it shall tenderize or even punish Mavis for her wicked ways, but she still goes back to being herself. "Young Adult" might move in a straight line without any arc or turnaround for its anti-heroine, but you do feel sorry enough for her that you'd like to see her finally grow up from a young adult in her next chapter. While it is a refreshing angle for a character study, Cody and Reitman renege on any real catharsis that it's hard to take away anything more than a sour aftertaste. It's just salt on a wound. Perhaps, at 94 minutes, the film is too short for its own good. Still, honest to blog, Theron's impressive performance makes this dark comedy of non-growing pains delicious going down.