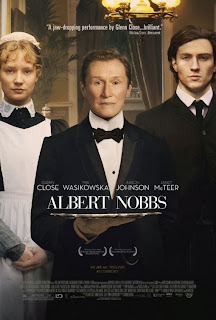 "Albert Nobbs" probably wouldn't have been made had it not been for Glenn Close. Having played the title role 29 years ago in an Off Broadway production, based on Irish author George Moore's novella, Close worked hard bringing it to the screen as co-writer and producer. She even stars as Albert Nobbs, a woman posing as a man in order to make a living in 19th century Ireland. And because of this passion project being so dear to Close's heart, "Albert Nobbs" works as a fine showpiece for the criminally underrated thespian. The film itself, thematically about appearances, appears to be a gratingly sentimental Hallmark telepic or a period-piece version of "Tootsie." But although the film hasn't the rich emotional thrust that the filmmakers probably intended, director Rodrigo García (2009's "Mother and Child") handles this unusual, often stirring fable about gender, class, and identity with a gentle, sedate sensitivity.

For thirty years, Albert is a timidly shy but mannerly butler at the upscale Morrison's Hotel in Dublin for the privileged. Each night, Albert counts his (or her) life-savings under a loose floorboard in order to marry and open a little tobacco shop. Having to share the same room (and bed) with contract painter Hubert Page (Janet McTeer), Albert fumbles while undressing, exposing her breasts from a tight corset, only to wake up her bedmate. She pleads Hubert not to "out" her. But then to Albert's surprise and comfort, Hubert reveals himself to also be a woman, now married to a woman, and Albert dreams to have a similarly married life. Meanwhile, feisty maid Helen (Mia Wasikowska) and her new fella, the illiterate, newly hired boiler man Joe (Aaron Johnson), want to go to America, so Helen starts "walking out" with Albert to milk presents out of him. Inscrutably, Albert takes quite a shine to Helen, who doesn't love him back, but all the "kind little man" wants is to live a normal life and to be treated equally.

Nominated for five Oscars but never a legitimate winner, Close's performance is quietly moving, understated, and deserving of some sort of accolade. We know as much about Albert as Hubert finds out, but Close makes this woman's social oppression and courage utterly heartbreaking. She also pays tribute to Charlie Chaplin with her stiff movements and moments of stunned facial expressions. Remember when Close made that cameo as a bearded pirate in Steven Spielberg's "Hook"? Probably not, but she was most unrecognizable. Here, the prosthetics make her look waxy and androgynous that it's often incredulous how no one questions Nobbs just being a woman in drag, but it mostly works in the context of the time period and the naïveté of the hotel staff. Hey, at least Close is more convincing playing a man than Barbra Streisand was playing a Jewish boy in "Yentl." Wasikowska is reliably becoming the go-to girl for period pieces, but in the part of Helen, she only has a pert, sarcastic sense of humor. Once she meets Joe, she becomes his puppet with no real mind of her own. Looking like k.d. Lang, McTeer is terrific as the cocky and gruff but down-to-earth Hubert. In supporting roles, Pauline Collins, as the snooty hotel owner Mrs. Baker; Brendan Gleeson, as the hard-drinking Dr. Holloran; and Mark Williams, as fellow waiter Sean, add color.

With exquisitely genteel production design, "Albert Nobbs" is also a very handsome looking film. It's the content of the characters that could have been refined. When the film centers on Albert and Hubert, it sings, but one wishes less time was spent with Helen and Joe since they're both conniving and shallow. The character of Albert also feels a bit truncated on the page. Who was she before Albert? After Hubert tells Albert her story and asks the other what her real name is, Albert responds with "Albert," as if she can no longer remember her real name. The woman has disappeared into the guise of Albert for so long that she's living a lie, losing sight of her true identity but not her soul. She seems to be more asexual than a lesbian, somewhat using Helen to complete her dream. In contrast to Albert, we gain a deeper understanding of Hubert, but Albert's story is still sad to watch. When Hubert assures Albert, "You don't have to be anything but who you are," your heart aches for her, or him. But Close and McTeer's lovely work notwithstanding, "Albert Nobbs" is too muted and drowsy to really resonate to its fullest potential.