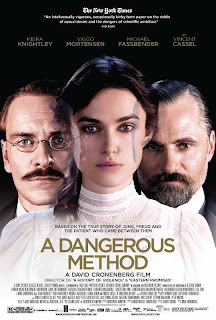 Exploding heads and orifice stomachs are no more. Inimitable filmmaker David Cronenberg making a stately, dialogue-heavy period piece about the pioneering of psychoanalysis might seem anomalous at first glance. And yet the King of Venereal Horror is right at home with the Fathers of Psychology when you consider his proclivity for the human body. If you've forgotten, his 1996 film, "Crash," was about people getting off to car accidents. Cronenberg's films have always been clinical and detached, keeping us emotionally at arm's length and sealing us off from some of his stories but still having something to say. Four years ago, "Eastern Promises" was his most accessible, but "The Fly" and "Videodrome" still admirably remain his ickiest and most challenging works. The last descriptor for a Cronenberg film would be "dull," but "A Dangerous Method" is just that, even if it's restrained and has intentions to be intimate. It will go down as one of his most underwhelming, no, make that a Cronenbergian slip.

In Zurich, Switzerland, circa 1904, a screaming, hysterical Russian Jewish woman named Sabina Spielrein (Keira Knightley) arrives at Dr. Carl Jung's Burgholzli Clinic. Jung (Michael Fassbender) studies Sabina, who has hopes of being a doctor, and she becomes his first patient for the "talking cure." He's having a child with his wife, Emma (Sarah Gadon), but gives into urges of polygamy when he experiments his "talking cure" on Sabina. Seems Sabina represses the excitement she felt when her father would punish her with spankings, and that triggers sexual desires shared with Jung. In the meantime, Jung meets with and becomes a mentor to Sigmund Freud (Viggo Mortensen) and they bond over their opposing academic theories. But when Jung calls off the affair with Sabina and she requests to be Freud's patient, the men have a falling out.

Fassbender is more buttoned-up but still engaging and strangely seductive as the Swiss psychiatrist. Mortensen, star of Cronenberg's "A History of Violence" and "Eastern Promises," is dryly humorous and egotistical, sucking on his Freudian cigars. But it's Knightley's alternately brave, frothing-mad, and hysterically over-the-top performance that gives the film a much-needed feral jolt. It's most startling and fascinating, seeing the actress go for it, jutting out her jaw, violently contorting her face, and convulsing with maniacal cackling. She's committed in the role and as convincing as a person in overbiting hysterics might be. A supporting turn by Vincent Cassell as Otto Gross, Jung's fellow cokehead psychiatrist who encourages him to follow his id, might've livened up the film a bit, but not by much.

The screenplay by Christopher Hampton (based on his play "The Talking Cure," itself based upon John Kerr's book "A Most Dangerous Method") is at least well-researched, but Cronenberg doesn't seem to find a way of dramatizing it with any life or tension. This historical speculation leans towards half-kinky soap opera, but the other half is a staid, stilted, and talky chamber drama. Listening to Jung and Freud's conflicting views on psychoanalysis are certainly provocative, but built into a film, their conversations and letter-writings become as stimulating as hearing two professors recite from textbooks. When Sabina talks about feeling a mollusk rubbing up against her naked back as she masturbates, you know you're still in the hands of Cronenberg. But Jung and Freud putting in their two-cents about the meaning of auto-erotica in Cronenberg's "Crash" might've made a more compelling film. For such a turgid treatment, "A Dangerous Method" will be forgotten after the award season is over. Perhaps the once-exciting auteur needed a cure for less jaw-flapping and more spankings.