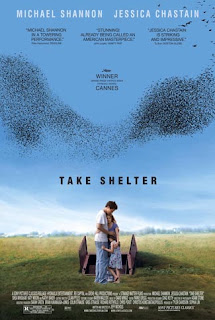 We notice a storm a'brewin' in the sky. The clouds are dark and ominous. The trees are wavering. Then the rain starts to pour, but it's motor oil. Is this just a dream, or hallucination, or is it a portent of an apocalypse? Curtis LaForche experiences this conundrum in "Take Shelter," but it might even be something inside of him that's boiling over. Written and directed by Jeff Nichols, this gripping domestic-horror-drama-for-Midwestern-families simmers with a slow-burn unease that rarely lets up.

The always-crazed, never-uninteresting Michael Shannon plays Curtis, a hardworking blue-collar construction worker and loving family man getting by in small-town Ohio with his housewife, Samantha (Jessica Chastain), and their 6-year-old hearing-impaired daughter, Hannah (Tova Stewart). Everything is going right for the LaForche family: Curtis's healthcare benefits will cover Hannah's corrective surgery and Samantha is saving up for their summer beach house with her seamstress work. Then Curtis begins having nightmares, mostly about an impending storm. Another has him being attacked by his dog, who's then consequently kept outside. Curtis will either wake up in a sweaty panic or he'll pee the bed. Without telling Samantha, he fears his family's history of mental illness could have been passed onto him and seeks counseling. Then Curtis begins seeing swarms of birds flying in strange patterns that his co-worker/best friend, Dewart (Shea Whigham), doesn't. He hears thunder that no one else hears. He's having prescience of a storm and becomes obsessed with expanding the tornado shelter in their backyard. Even if the storm is real not, Curtis' life is on a downward spiral, with his finances, profession, and relationships at risk.

Nichols (whose last feature, "Shotgun Stories," also starred Shannon) sets an aura of impending dread in a common town, with a "now" reflection of our tough economic times, and peppers it with startling, visionary images. There's one quiet, unsettling dream in which Curtis walks into the kitchen to find Samantha, standing there with a blank stare and a kitchen knife on the cutting board behind her. Another scene so vividly imagined has living room furniture levitating in front of Curtis and Hannah. David Wingo's unforgettably haunting music score and cinematographer Adam Stone's striking work are the crème de la crème of adding to Nichols' chilling mood.

In films like "Bug" and "Revolutionary Road," character actor Shannon keeps getting typecast as bug-eyed nutsos that belong in the nuthouse, but he plays "unhinged" with searingly credible power. He has such an intimidating, square-jawed face and a way of boiling with rage inside. It's an intense, internal performance that just because of it makes the film worth recommending. But Chastain is never overshadowed. In her sixth film this busy year, she proves her special versatility as an actress. Chastain takes what could've been a plainly subservient housewife (like her character in "The Tree of Life") and plays Samantha with a natural persuasion and grace. While Shannon's Curtis suffers his nightmares and inner meltdown, Chastain's Samantha is dealing with a confused mix of frustration, fear, and support, as well as her dreams teetering on ruin. The underrated Kathy Baker has a single stirring scene as Curtis's mother, who was diagnosed with paranoid schizophrenia in her 30s and living in an assisted-living facility ever since.

The film is a bit more deliberately paced than it had to be, but unravels its carefully wrought tension to the very end. Even by the unshakable last frame, "Take Shelter" provides no concrete answers and concludes with an admirable ambiguity. We're left not knowing what's real, what's a dream, and what's mental disease, but that doesn't really matter. Prepare to be ready for discussion afterwards because "Take Shelter" should take anyone by storm. 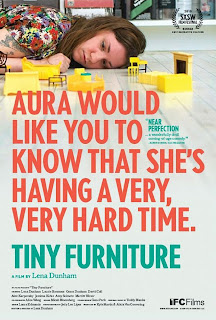 Tiny Furniture (2010)
98 min., not rated.
Grade: B +
At only 24, Lena Dunham has written, directed, and starred in her second feature film, "Tiny Furniture," the first to garner festival accolades such as the Independent Spirit Award for Best First Screenplay and Narrative Feature Award at the SXSW Film Festival. Somehow getting over the hump of just being narcissistic or self-indulgent, Dunham's low-budget autobiographical comedy is wonderfully wry, witty, and insightful. She has comic spontaneity and a fresh, unique voice, announcing herself without ego that there's a very promising filmmaker in our midst.

Dunham stars as Aura, a 22-year-old Ohio college grad, majoring in film theory, who moves back home with her pet hamster in tow to her successful art photographer mother, Siri's (Laurie Simmons), studio loft in the Tribeca neighborhood. Siri takes pictures of tiny furniture all day, and her precocious award-winning poet of a high school sister, Nadine (Grace Dunham), makes Aura scoop out the kitty litter and calls her lazy. But while at home, Aura gets to sleep in, reads her mom's old journals, and gets to reconnect with her entitled, uninhibited British gal pal Charlotte (Jemina Kirke). Recently breaking up with her boyfriend, she's introduced to a self-involved YouTube artist named Jed (Alex Karpovsky), who's "a little bit famous in, like, an Internet kind of way" and in town for a few weeks on business. They plan to go on a date, but Jed is low on finances, so they end up having tea at Aura's loft, and since he really has no place to stay and Aura's mom and sister are on a week-long college visit, Aura invites Jed to crash in Siri's bedroom. Needless to say, Jed becomes a free-loader that keeps his distance. Meanwhile, Charlotte gets Aura a day-hostess job at a nearby bistro, where she crushes on a scruffy sous chef named Keith (David Call).

Dunham is clearly comfortable with her pudgy body in front of the camera for the whole world to see, or she just doesn't care. As Aura, she puts herself out there, parading around her house without any pants on to the time she has sex with Keith in an outside pipe. She's endearing and self-deprecating with a Charlyne Yi/Aubrey Plaza quirkiness but more relatable. However, Dunham's real old friend, Kirke, is the breakout star. She's a true find, hilariously blunt and prickly as Charlotte. At first, some of the acting feels self-conscious and unnatural with flat line readings, but unless scenes were actually shot in order, the "actors" settle into their characters as the film goes on. Dunham's real mom (Simmons) has a very touching moment toward the end with her daughter, who rubs her mom's back and discusses how hard her life's been lately. Also, her real 17-year-old sister Grace, playing Nadine, has some funny younger-sister moments, one in which she responds to Aura's "post-graduate delirium" with "you sound like you're in the epilogue to 'Felicity'."

"Tiny Furniture" shares technical aspects of the mumblecore revolution in a "do it yourself" sort of way, but Dunham makes it all her own. Shot on a still digital Canon 7D camera, her images are bright and crisp in cramped NYC locations, and have a visual wit (i.e. Siri's numerous white cabinets). The film might be small in scope, but Lena Dunham is a triple threat of rare talent that doesn't sweat the small stuff. That's cause for celebration.