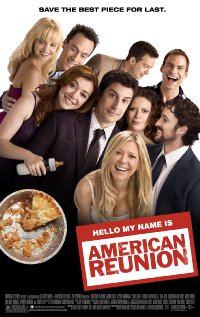 Back in 1999, the sleeper hit "American Pie" was more than just a generational "Porky's." It was a sweetly raunchy and refreshingly good-natured teen sex comedy that could be called a classic in its own right. The 2001 sequel, "American Pie 2," was agreeably funny and sweet, but 2003's "American Wedding" turned out to be mostly stale baked goods. And there's absolutely no need to even bring up any of the four cash-in spin-offs that went directly to DVD. Now, thirteen years after the first film, "American Reunion" gets together the original cast (Oz and the girls included this time) and it's a trip down memory lane. However, it feels like the same old song and dance albeit with a slightly different beat: the guys still get themselves into the most ridiculous situations but have grown up. The thirteen-year wait doesn't fully justify mostly more-of-the-same results, but like being at your own reunion with old friends, you don't mind catching up with this likable bunch.

So where are all the desperately horny teens-turned-thirtysomethings now? From "American Wedding" to now, Jim (Jason Biggs) and Michelle (Alyson Hannigan) are still married and have a 2-year-old son. They're in a sexual rut, so they both have to pleasure themselves separately (Jim with his trusty, blue-striped tube sock and Michelle with Mr. Showerhead). Kevin (Thomas Ian Nicholas) is married but emasculated, forced to watch "Gossip Girl" and "Real Housewives." Finch (Eddie Kaye Thomas) is travelling around the world on a motorcycle. Oz (Chris Klein) is a slick sportscaster and former "Celebrity Dance-Off" contestant living in Malibu with his party-animal girlfriend (Katrina Bowden). Stifler (Seann William Scott) is still run by his id, but works as an intern at a big corporate firm. All settled into their adult lives, the guys plan to attend their 13th high school reunion (they missed their 10-year, you see). Back home in East Great Falls, Michigan, Jim's next-door neighbor Kara (Ali Cobrin, a young dead ringer for Marisa Tomei) is turning 18 and throws her virginal self at her former babysitter. Kevin runs into his first love, Vicky (Tara Reid), and Oz might still have feelings for his former flame, Heather (Mena Suvari), who's dating a heart surgeon. Finch has his eyes set on an ugly duckling-turned-hot bartender, Selena (Dania Ramiriz), who used to experiment with Michelle at band camp. Finally, there's Jim's sweet-natured Dad (Eugene Levy), who mostly stays at home after the death of his wife three years earlier, and his son encourages Dad to get back into the dating game. Before the reunion, the gang is back home and together, realizing they can't revel in their glory days anymore.

"Harold & Kumar" franchise creators Jon Hurwitz & Hayden Schlossberg take over as writers and directors, and for the most part, they recapture what made original writer Adam Herz's characters so endearing when they could've been smarmy. Right off the bat, R. Kelly's "Bump & Grind" playing over the opening shot of clothes scattered over the floor reminds one of the first film's opening scene. Sounds of a shaking bed get louder, until the camera pulls up to reveal Michelle rocking the baby, not crazy sex with Jim. This tired, obvious double-entendre and the he/she masturbation gags that follow should be funnier than they are. Otherwise, the bawdy humor hits most of the time. The guys' revenge, led by Stifler, on some prankish high school guys—leaving a little surprise in their beer cooler and then ruining their jet skis—is particularly a hoot.

Even when a lowbrow laugh doesn't really work, there's still an underlying sweetness and truth at the front: times have changed and you can't go home again. Stifler gets the brunt of this, as the guys try ditching him and the famous parties he always threw have become low-key dinner soirees. The titular reunion should've carried out more of the run time because everything prior to the event, with Jim's former charge Kara tempting him, is mostly one forced scenario after another. While other characters are figuring their own relationships out, Jim and Michelle's marriage is really the heart and soul of the very episodic story. Also, it's the camaraderie of these four friends (well, five if you include Stifler) that always rang true in these films and it still comes through after all these years. Best of all, Jim's now-widowed Dad is given more touching sit-down moments with his son that he's able to create more of a character instead of just being a punchline. On the whole, "American Reunion" goes back to the Class of '99-ers we fell in love with, and we still have affection for them.

Making each of their names on the success of "American Pie," the returnees effortlessly slide back into their characters. Formerly fornicating with a pie, getting his superglued hands stuck to his privates, and being caught in flagrante delicto in general, Biggs is still dweeby, likable Jim. Suffice it to say, he gets himself into more humiliation. As former band-geek nympho Michelle, the ever-adorable Hannigan fits comfortably with Biggs as a married-with-children couple. Three-named actors Nicholas and Thomas as Kevin and Finch, respectively, mostly play the straight men to their gang of buds, but as Oz, Klein really lets his comedy flag fly with some hip-hop moves which still made him lose to Gilbert Godfrey. Making up for being a no-show at Jim's wedding in "American Wedding," Oz even says, "I missed your wedding, I wasn't going to miss this!" As the boorish, id-powered Stifmeister, Scott is no stiff when it comes to comedy. His Stifler is like an eager-beaver man-child stuck in Neverland, as he still hasn't grown up, but he's the life of the party and the film.

What about the females, you ask? Reid and Suvari are relegated to playing plot points and arm candy, bringing very little to Vicky and Heather this time around. New to the cast, Bowden is game to play the off-the-wall blonde hottie Mia, Oz's girlfriend. As Jim's Dad and Stifler's Mom, Levy and Coolidge (both veterans of Christopher Guest's mockumentaries) finally get together in a lovely scene, where they just talk and then decide to get baked. Also, by himself, Levy has always had some of the most quotable lines of dialogue, this time telling Jim how his mother once favored "diving for dollars" in the bedroom. At the caterpillar-browed Levy's expense, a photo montage for a Jewish dating service pokes fun at his "trademark." Other supporting characters from the first two "Pie" films make appearances at the reunion, but they feel like wasted opportunities. Chris Owen makes a fun little cameo, as the once-nerdy "Sherminator"; Natasha Lyonne gets robbed with only a few lines as Jessica, who always added comedic bite in this role; John Cho's MILF Guy #2 has a nice personal reunion with Justin Isfeld's MILF Guy #1; and Shannon Elizabeth pops in briefly as the still-sexy Nadia. Finally, there's a rewarding surprise cameo (let's just say he or she was one of the stars of an '80s teen comedy) that closes Stifler and Finch's throughline where the latter slept with the former's buxom MILF.
With throwaway references and callbacks to the 1999 original, "American Reunion" works as Greatest Hits nostalgia and a fitting bookend. Jim's embarrassing strip dance in front of foreign exchange student Nadia still being on the Internet is mentioned a few times. Getting into the '90s spirit even more, the music soundtrack is full of goodies (Lit's "My Own Worst Enemy," Semisonic's "Closing Time," The Verve Pipe's "The Freshmen," and even Bic Runga's "Sway" as a cue to the first film). Closing the film at the guys' spot, Dog Years, will also take you back and give fans their own bliss. There's something comfy about reuniting with these characters, making "American Reunion" feel like warm apple pie. 'Til next year!
Grade:  B -