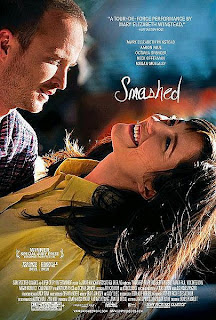 "Smashed" shines an emotionally honest but all-too-brief light on the issue of alcoholism and recovery, neither excusing nor demonizing the sodden behavior of a middle-class Los Angeles couple. Director James Ponsoldt, co-scribing the script with Susan Burke, has made a sensitive, affecting film without turning it into a glib Issues Movie or a sobering depressant that makes you want a drink afterward. Above all else, "Smashed" offers one reason for recommendation: a revelatory, reel-best performance from Mary Elizabeth Winstead. Kate Hannah (Winstead) has a problem. Every night is the same giddy, intoxicated night for her and husband Charlie (Aaron Paul); they drink socially until they get hammered and wake up in a urine-wet bed. A first-grade school teacher, Kate drinks a beer in the shower before work and drinks from a flask in the parking lot. While teaching with the enthusiam of a game-show host, she vomits in front of her students, rashly telling them and the principal (Megan Mullally) that she's pregnant. Later that night, she continues her sloshy routine, but after giving a drunk girl a ride home from the bar, Kate ends up smoking crack and passing out in an alley. She tells Charlie that she wants to "slow down," but it's not going to be that easy. Even after she more or less admits to having a problem, she goes and drinks again, this time urinating on the floor of a convenience store, stealing a bottle of wine, and waking up outside again. The school vice principal (Nick Offerman, Mullally's real-life hubby) realizes what's really wrong with her because he, too, used to battle the drink and sways her to go to AA meetings with him. It works for her, but Charlie continues his ways.

Addiction dramas are a dime a dozen. Reiterating the highs and lows of substance abuse, and often including the requisite breakdown scene of the lead character throwing a bottle or a glass at the wall, many of them are content to resort to clichés and pat conclusions. In this film's favor, Ponsoldt and Burke (who wrote from personal experience) shed insight into the difficulties of conquering an obstacle even when someone who's supposedly your life partner isn't much help as a support system. There are enough messily true moments, captured by the wobbly, hand-held camerawork, an indie quirk but the choice being more motivated given the subject matter. However, at the same time, Kate's self-realization and recovery feel a bit too easy (despite a later relapse). The script makes a couple leaps—Kate attends her first AA meeting by the half-hour mark, then she's celebrating her three-month sobriety, and then a whole year passes—that are hard to take. And yet, the real focal point is Kate and Charlie's marriage and their commitment to not just one another but themselves.

When an actor must pretend to be drunk on screen, it can either be completely convincing or embarrassingly indulgent. Winstead is raw and understated, showcasing her once-untapped range and depth. Though most memorable to date as the droll, violet-haired Ramona Flowers from "Scott Pilgrim vs. the World," she clearly has what it takes to be more than "that girl" or a scream queen (after appearing in "Final Destination 3," "Black Christmas," and "The Thing"). She lends even more relatability being made to look plain in her ankle-length sundresses and has more than her share of unpretty benders, especially an uncomfortable relapse that never rings false. The character of Charlie is underwritten, but Paul is fine with what he's required to do. He's always working from home, and when he's not, he's out with his brother (Kyle Gallner) to see bands "for work." Despite precious little screen time distributed, the rest of the supporting cast capably flesh out their characters. Offerman, as colleague and former addict Dave Davies (!), is low-key and has an amusingly awkward moment with Winstead, making a crude, unsubtle pass at her with words alone. Octavia Spencer is wonderful, playing Kate's sponsor Jenny who has substituted alcohol for sweets. Mary Kay Place, as Kate's estranged mother Rochelle, also gets one good scene, where Kate and Charlie go to visit her at her Arrowhead home and she has no respect for her daughter's sobriety, immediately mixing them Bloody Marys. Finally, Mullally is a pleasure as always, perfectly blending her comic and dramatic abilities. At 81 minutes, "Smashed" is actually too slender for its own good, ending on a life-like note that's still not satisfying enough for this particular story. It feels like the story hasn't ended, even though the script has. Again, the film is worth seeing alone for the acting notice by Winstead.