Take "The Call" before its rock-stupid third act 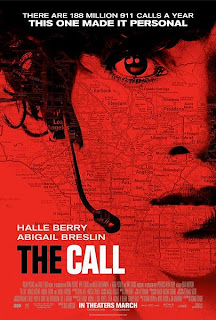 No film should be judged by its trailer because a bad trailer can be made from a good film and vice versa. In case you caught the laughingstock trailer of "The Call," you already know every story beat. Now onto the film itself: this formulaic but tense and efficient genre programmer isn't trying to reinvent the language of film but does exactly what it intends to do and does it quite well. Already bearing a solid track record ("Session 9," "The Machinist," "Transsiberian," and "Vanishing on 7th Street"), director Brad Anderson proves how astute he is in sustaining a taut, involving fever pitch over an emergency phone call. Richard D'Ovidio's script falls apart in the end, but as a good thriller should, "The Call" clenches you tight.

Halle Berry stars as Jordan Turner, a 911 operator who's usually calm and focused when handling stressful calls at the Los Angeles call center, dubbed "the hive." Then Jordan receives a distress call from a hysterical teenage girl reporting a break-in, until making a grave mistake that leads to the girl being kidnapped and murdered by the prowler. Jordan instantly feels guilty and beats herself up about it. Six months later, she is off the floor to train new operators, until an eerily similar call comes in from a teenage girl named Casey (Abigail Breslin). She's been abducted from the mall parking garage and locked in the trunk of a moving car on a freeway. Jordan's co-worker panics, so the veteran hesitantly takes over and helps Casey fight for survival. Will their call get disconnected, or can Jordan help the police find Casey and her kidnapper before she becomes a corpse?

Crafted with economy, "The Call" introduces Jordan, her co-workers, her boss (Roma Maffia), and her LAPD boyfriend (Morris Chestnut), the inner workings "the hive," as well as its central caller, before it digs right into the high-concept premise. After "the call," Jordan becomes emotionally attached to the kidnapper's latest victim Casey (which is a major "don't" for operators) and, in turn, we become invested, too. Casey follows Jordan's instructions as competently as a young woman in such harrowing circumstances could and wisely sticks her untraceable prepaid phone (with Jordan still on the line) into her back pocket any time her unhinged captor opens the trunk. Without giving away specifics of the thrills (or an arbitrary twist, which the trailer already spoils anyway), just know that the film is an airtight pressure cooker for the first two acts. Furthermore, Anderson expertly uses some disorienting camera angles with a fisheye lens and some freeze-frame editing tricks that amp up the terror.

Halle Berry has made her fair share of stink bombs before ("B*A*P*S," "Catwoman," "Perfect Stranger" and, most recently, "Movie 43"), but not even a frizzy wig, which might've looked better on Tina Turner, can bring her down. Who knew watching a beautiful woman on a headset could be so gripping? As Jordan, she is resourceful and vulnerable, conveying how difficult it must be to not always have closure with a PR (Person Reporting) after the LAPD takes over. But eventually, she is asked to act below her normal intelligence just so she can find redemption (and so the movie can go on). Getting time to first establish a few defining traits for Casey, Breslin has the challenge of acting from the inside of a trunk, credibly selling fear and panic. She isn't just a damsel in distress but has some moxie and fight in her, although in the third act it's a bit off-putting to see the now-16-year-old "Little Miss Sunshine" star sexualized as she's tortured in her bra for trashy exploitation. Making the situation all the more frightening, Michael Eklund is convincingly creepy, pathetic, twitchy, and loathsome as the serial kidnapper with some icky plans for Casey.

Alas, suspension of disbelief snaps to pieces in Act III. Because the script says so, Jordan is forced to leave "the hive" and become Nancy Drew in a slasher flick, venturing into the Buffalo Bill/Norman Bates wannabe's den unarmed and without backup. It's hard to believe Jordan would just abandon all common sense to take matters into her hands, but then again, she made a promise to Casey and won't rest until she's found with a pulse. "Oh, come on!" and "Finish him off!" moments ensue, and the more the film tries to up the stakes, the dumber and more frustrating it becomes, coming closer to diminishing all of the good will it has already built. If "The Call" was meant to be over-the-top revenge schlock, the cheap and debatable finale might be forgiven, but it isn't and the last few frames cannot be taken seriously. Until that misjudged, if not "crowd-pleasing," point, "The Call" is still a well-made, entertaining B-thriller with capably low-budget thrills. The hyperbolic cliché "edge-of-your-seat thriller" actually applies here.