New on DVD: "Vampires Suck," "Flipped," "The Disappearance of Alice Creed," and "Scott Pilgrim vs. the World" 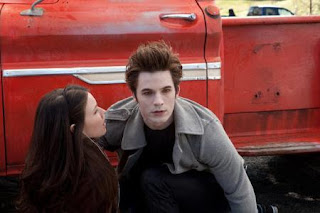 No doubt The Twilight Saga, a franchise of straight-faced vampire soaps, is so ripe for being spoofed, but Vampires Suck surely isn't it. Forks, Washington is jokingly re-named Sporks (get it?), and the vampire clan is named The Sullens, not The Cullens, and the clever sendups just keep on coming!

As Becca, newcomer Jenn Broske is actually spot-on in mimicking Kristen Stewart's sullen lip-biting of the angsty Bella. A handful of scattershot laughs are earned, mostly for their self-aware comment on the Twilight movies, and actual locations are used rather on Styrofoam-fake soundstages, but the level of filmmaking here is still amateurish.

While all the hacks' other “movies” (Date/Epic/Disaster Movie, Meet the Spartans) really sucked, Vampires Suck only sucks. 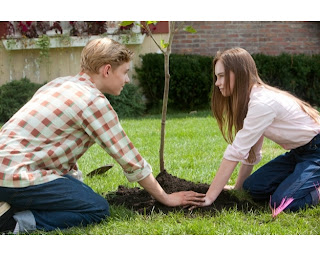 Rob Reiner tends to have no apologies for earnestness in his films, which wear their hearts on their sleeve. Flipped is no different—it's a softie. But that's not necessarily a bad thing, as he commands this effort the way he did with Stand by Me in 1986.

Starting out very cutesy with 1950s golden-oldies chirping on the soundtrack right out of “The Wonder Years,” Flipped finally settles down as an appealing, pleasantly warm nostalgia tale that handles some serious matters as well.

The he/she-said story, based on a 2001 young-adult novel by Wendelin Van Draanen, is told from the alternating point-of-views of Juli and Bryce. Juli has been “stalking” Bryce since the second grade when Bryce and his family move across from the street. Then they both enter the eighth grade and the girl's head still spins for the boy. She loves climbing up a big, old sycamore tree (and when up there, giving a report of how far the school bus is to their stop), while the other kids, including Bryce, think she's a pesty misfit. When Juli starts delivering her family's chicken eggs door to door in the neighborhood, Bryce's family have negative notions that Juli's family are sad people with Salmonella in their yard. Though their feelings toward one another constantly shift from first crush to first rejection, Juli and Bryce still get a flutter in their youthful hearts.

As Flipped says, there's a flip side to every story (and Reiner employs a lot of flip transitions between scenes). Co-adapter Reiner's script is driven by consistent voice-over narration, “showing” and “telling” Juli and Bryce's external/internalized thoughts and emotions. Reiner's direction is gentle and captures the sensitivity of pre-teenhood.

Reiner develops his young characters with depth and compassion, and Madeline Carroll and newcomer Callan McAuliffe are both sincere and spot-on in their roles. Carroll, especially, has the charm, ease, and maturity as a young actress. The parents are comparably written and played with a black-and-white brush. Aidan Quinn, Penelope Ann Miller, and Rebecca De Mornay are stronger than Anthony Edwards, who overdoes it most of the time as Bryce's insensitive, angry-when-drinking dad and De Mornay's hubby. John Maloney is also very sweet as Bryce's grandfather who sees a bit of his deceased wife's spirit in Juli. 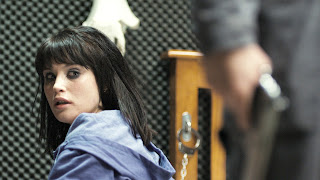 A tensely spare Brit kidnap-thriller, The Disappearance of Alice Creed is so stripped-down it's a three-character piece largely in one location.

Two meticulous ex-cons (Eddie Marsan, Martin Compston) kidnap rich girl Alice Creed (Gemma Arterton) and imprison her in a sound-proofed apartment, holding her ransom for $2 million. Both the abductors and the hostage have secrets of their own that complicate the whole plan.

J Blakeson writes and directs, this being his feature debut, achieving more character meat than the standard thriller and some twisty, double-cross surprises up his sleeve. Early scenes of Alice chained to a bed, stripped naked, and gagged with a ball, are basically sleazy exploitation.

But the rest is so tightly cut and acely crafted that it reaches a gripping suspense level, especially one scene involving the disposal of a bullet. Arterton, a British beauty with Jennifer Garner's facial structure, is outstanding as the vulnerable but feisty Alice, and Marsan and Compston both solid, drawing more than one trait out of their thug roles.

Despite the last five minutes being a bit of a letdown, The Disappearance of Alice Creed goes to show what a tight script, good actors, and a confident first-time director can do. 96 min., rated R. B + 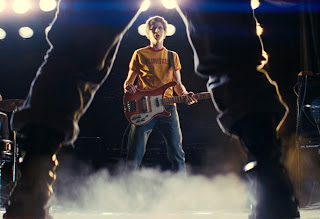 Scott Pilgrim vs. the World just might be the most cleverly original indie punk-rock, fantasy, kung-fu fighting romantic-comedy on speed.

Despite the fact that the jury is still out on the actor's longevity, Michael Cera is typecast here, looking like a gangly turtle, as Scott Pilgrim, a 22-year-old Toronto slacker who plays bass in his band Sex Bob-Omb. And he's a babe magnet, dating a high schooler (!) named Knives Chau (Ellen Wong, a sweet charmer) who adores him. But Scott has his eyes set on Ramona (Mary Elizabeth Winstead), a violet-haired new girl in town who changes her hair color weekly and calls Scott “dude.” And she's his if and only he can defeat her “seven evil exes” as if they are videogame levels.

Director Edgar Wright brings Bryan Lee O'Malley's graphic novels to life with such energy and ingenuity that Scott Pilgrim vs. the World plays out like a larger-than-life comic book and videogame, right from the 8-bit version of the Universal Pictures opening. Wright has fun here, from the onomatopoeia visuals (doorbells go “Ding Dong!”), a “pee-o-meter” bar, sitcom references to the Seinfeld theme music and live-audience laugh track, and the “f word” gets censored involving Aubrey Plaza's abrasive Julie Powers.

And the mano-e-mano duels play out like the fights in the '60s Batman TV show, complete with “pow” and “bam” firing on the screen. The cast is excellent too, all blessed with a quick wit, personality, and an endearing quality, including the sharp Anna Kendrick as Scott's opinionated younger sister, Kieran Culkin who's hilarious as Scott's gay roommate, and Alison Pill is a deadpan, acid-tongued scene stealer as Scott's drummer. Jason Schwartzman, Chris Evans, and Mae Whitman are the most memorable of the exes.

The high-energy is infectious and everything feels 3-D without actually being shot in 3-D, although 7 exes is a lot, dude (thankfully, Scott takes on a set of twins simultaneously), and the film does peter out before the last level.

At an almost-exhausting but very exhilarating breakneck pace, this is a geeky, endlessly inventive, and entertaining blast.