"42" corny and conventional but satisfying crowd-pleaser 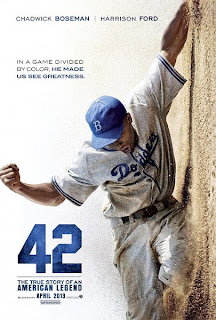 "42" tells the inherently important true story of Jackie Robinson, the first African-American baseball player for the Brooklyn Dodgers to break the Major League color barrier in 1947. (The title refers to Robinson's jersey number, which has been retired by all MLB teams in his honor, except for Mariano Rivera.) Writer-director Brian Helgeland (2001's "A Knight's Tale") wisely shies away from the paint-by-numbers life-to-death scope of most biopics and sticks to the pivotal two years of Robinson's struggle against narrow-minded racism and how he influenced baseball and society in general. In telling this incredible story (there's no denying that), the treatment is still pretty conventional and borderline hagiographical. But, as a soft, corny, old-fashioned sports movie, it's slickly done entertainment.

For an "American Legend," such as Jackie Robinson himself, it would be hard to see the ballplayer as anything less than a saintly hero. However, it's nice to see when he does show an (understandable) rage brewing inside of him, which comes as a much-needed rough edge and sign of vulnerability. With that said, film newcomer Chadwick Boseman colors outside the lines and makes for an wonderfully engaging Jackie Robinson, conveying perseverance, charisma and a certain playfulness, to boot. Nicole Beharie, playing his supportive wife Rae, brings much more personality to a peripheral part that could have just had her stand by her man. Together, Boseman and Beharie forge a loving, even sexy, bond. As the Dodgers' blustery but compassionate general manager Branch Rickey, Harrison Ford hams it up, gruffly speaking out of the corner of his mouth and chomping on cigars. It's a cartoony performance, where all we see is Harrison Ford, but still an enjoyable one. Also, an array of character actors do good work, including Christopher Meloni, as the Dodgers' manager Leo Durocher; Lucas Black, as Pee Wee Reese who shares that iconic embrace with Robinson on the field; Hamish Linklater; Brett Cullen; and John C. McGinley, as the dry announcer Red Barber. Finally, without whitewashing the ugly embarrassment of history's racial relations, an effectively gross Alan Tudyk decidedly plays against-type as the Phillies' cruel manager Ben Chapman. He could have been close chums with the racist slave owners in"Django Unchained."

A framework with sports journalist/Jackie's chauffeur Wendell Smith (Andre Holland) is discarded halfway through. There are also some wedged-in cutaways to a black mother and son in the stands that are too Disney-fied and ham-fisted. Those flaws aside, Helgeland gets his points across more successfully on the field. From behind the camera, he makes the games feel rough, not gauzy, and quite exciting, with one shot photographed from beneath the base, and even funny, as when Robinson steals the bases. Adding up to parts that are greater than the whole, "42" could have been great, had it been explored with more nuance and complexity into the American Legend and less of the "whites are evil" heavy-handedness. Instead, it settles for good—and feel-goody. With its button-pushing uplift and vintage, Cracker-Jack nostalgia for baseball fanatics, an earnest crowd-pleaser might be satisfying enough for mainstream audiences, even if it's not always dramatically interesting.