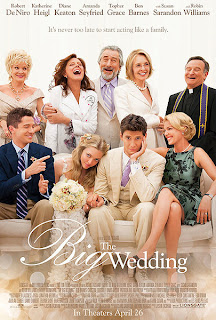 "The Big Wedding" is big all right — it's a big, bland mess with a big guest list of likable, attractive stars, but it's not painfully unpleasant, either. If the poster of photographed smiles and laughs is any indication, the cast just seems to be having fun working together, although with the absence of end-credit outtakes it could all be a sham. It's hard to say how so many talented people can make such a feeble movie just by showing up, but "The Big Wedding" is the glossy, gossamer-thin result. Adapting from the 2006 French comedy "Mon frère se marie," writer-director Justin Zackham (who wrote 2007's "The Bucket List") took on a sprawling roll call and turned their on-set party into a French-y, Shakespearean, albeit mostly Hollywoodized bedroom farce that's not as much fun or as charming to watch. Wacky, hilarious hijinks are only intended to ensue.

For a weekend in Greenwich, Connecticut, the dysfunctional Griffin family comes together to celebrate the nuptials of Alejandro (Ben Barnes) and Missy (Amanda Seyfried) at the upscale family home. Don (Robert De Niro) and Ellie (Diane Keaton), the groom's adopted parents, have been divorced for 10 years but Don has been happily shagging and living with caterer Bebe (Susan Sarandon), who was once Ellie's best friend. Are you ready for the sitcom-ready setup? Alejandro's biological mother, Madonna (Patricia Rae), is coming to the wedding from Colombia and she's a devout Catholic, so Don and Ellie have to pretend to still be married and Bebe has to get lost. The ruse goes so well that the divorced couple ignites something in the bedroom again.

The all-star ensemble just barely validates "The Big Wedding," most of the talent being wasted in a rudderless, clichéd script with skimpily sketched characters, some out-of-nowhere conflict, and dumbed-down subplots. Don and Ellie's now-grown kids have their respective issues: Lyla (Katherine Heigl), a lawyer, is recently separated from her husband, harbors unresolved hate for her father, and faints at the sight of babies; and Jared (Topher Grace) is a successful doctor but a 29-year-old virgin who may get his chance to finally knock boots with Alejandro's Colombian sister (Ana Ayora). Adding to the chaos are Missy's WASPy, ignorant parents, Barry (David Rasche) and Muffin (Christine Ebersole).

In its favor, the film takes a dip in the R-rated pool, with high-caliber actors holding risqué conversations about nine-hour orgasms and uttering the term "muff diving," as well as demonstrating it. However, the strain in the humor extends to lame, broad slapstick—moaning naughtiness, more naughtiness under the table at the rehearsal dinner, and characters falling into a lake—and the laughs don't land, unless it's with a thud. A pivotal scene with the outpouring of Secret Revelations minutes before the wedding not only falls flat as a dated bottle of champagne that's been left out in the sun but ends up making Don and Ellie unlikable cheaters and turning the plastic Muffin into a walking punchline. In the end, after conflicts are phonily and predictably fixed, family members hug it out and cut a rug at the reception. For a nuptial comedy, though, no one gets a cake in the face, so "The Big Wedding" has that going for it.

In their defense, when the screwball plot doesn't interfere, the actors do manage to occasionally inject sprinkles of bawdy spontaneity and relatability into their character DNA. Fresh off his Oscar-nominated turn in "Silver Linings Playbook," De Niro takes punches to the face by the women and lives up to the "scumbag"/"serpent"/"douchebag" slurs the women call him, but the best thing that can be said for him is that he's not in another movie with "Focker" in the title. Keaton goes through the motions, doing a less shrill but less daffy and less interesting variation on her previous roles, but Sarandon fares better, given a chance to do some loose comedy at her ripe age.

It still remains to be seen when another smartly written post-"Knocked Up" role will come her way, but Heigl is actually more appealing playing a snarky bitch, spouting some amusingly glib zingers, rather than an uptight, neurotic hopeless romantic all the time. Of all people, her Lyla might come the closest to resembling an actual human being in her family. The handsome Barnes (who's British but playing Colombian) and the radiant Seyfried are afforded the tasks of playing the bland but cute couple ready to just elope. Robin Williams reprises the role of a priest, getting lost in the shuffle and feeling straightjacketed from doing much comedy. At least he doesn't come off as creepy or obnoxious as he did in that "other" wedding comedy (read: the moronic, unfunny "License to Wed"). If you want a funnier and less forced French-farce remake with Williams, you're better off revisiting "The Birdcage." Damning with faint praise: More tedious mediocrity than insufferable disaster, "The Big Wedding" is the sort of movie that won't ruin your day and could be watched on a long flight to kill time. But don't even bother getting the earbuds out of your carry-on because you won't be missing much anyway.