Piercing, compelling, powerfully acted "Disconnect" puts its hooks into you 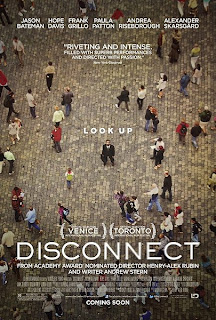 What connects all of the characters in "Disconnect" is their overreliance on technology. What makes the film such a piercing, sobering, and compelling cautionary tale of paranoia and impersonal communication is that this is the world we're living in now. Very few people write a letter anymore when there's e-mail. Why call a person when you can text them? And reunions; what are those? Just keep in touch on Facebook, where you can even meet friends you have never met face to face. Direct communication is nearly dead. In the vein of 2005's multi-character, intersecting-stories mosaic "Crash" by way of "Trust" and "Catfish," which undertook the timely horrors of social media and a user's gullibility, "Disconnect" so effectively hits close to the bone that it could be viewed as a cyber horror film for the digital age.

AWOLNATION's electronic "Sail" pounding over the opening credits gets our attention from the word go. 15-year-old Ben Boyd (Jonah Bobo) is a loner, hiding behind his music and long hair, and thus, becomes the target of a cruel prank. A couple of punks, classmates Jason (Colin Ford) and Frye (Aviad Bernstein), make up a fake Facebook profile under the name "Jessica Rhony," pretending to have a crush on Ben. The repercussions are not good. Bobo is sensitive and unshakably devastating as Ben who finally seems to think he's found someone interested in him before he's humiliated at school. Also, without treating Jason merely as a trouble-stirring little twerp who could have easily been demonized on the page, Ford pulls off a moving sadness and unexpected conscience stemming from the loss of his mother and the tough love from his single ex-cop father.

Meanwhile, the Hulls are mourning the loss of their toddler son. Cindy (Paula Patton) spends her days at home online, looking for support on a grief chat room with a widower, while her ex-marine husband, Derek (Alexander Skarsgård), bottles up his grief and barely looks at or touches her anymore. Their shaky marriage is tested when their identities are stolen and bank accounts wiped clean. The authorities are of no help, so Derek hires computer crime investigator Mike Dixon (a terrific Frank Grillo), who empathizes with their situation but shoots it to them straight. In the third vignette, Andrea Riseborough is excellent as Nina Dunham, a dogged TV reporter for a local station, who finds "18-year-old" sex-cam model Kyle (Max Thieriot) on the web. Once they have a camera-to-camera conversation and decide to meet, she confesses to wanting to interview him for a juicy, eye-opening non-puff piece on his seedy profession and his pimp-like employer (fashion designer Marc Jacobs) who recruits runaway minors as interactive porn performers. Who's doing the exploiting here? Nina promises to keep the self-assured Kyle anonymous and safe, but then the F.B.I. gets involved. In all, there are consequences to every erroneous choice and action.

Breaking from documentaries (most notably 2005's Oscar-nominated "Murderball") to make his scorching narrative feature debut, director Henry Alex Rubin and screenwriter Andrew Stern deftly handle all three story threads without making the whole piece feel disjointed. Hats off to editor Lee Percy, too, for tautly interweaving between each story. The cyber-bullying vignette is indisputably the strongest and most emotionally rich, but each of them are absorbing and leave their own thoughtful impact. Fortunately, Rubin and Stern don't feel the need to overlap every thread for a cumulative cause-and-effect concept or wrap up all of them with a tidy resolution. Instant message dialogue, seen in graphics on the screen, often takes the place of verbal dialogue, which goes to show how so many people are obsessively tethered to their cell phones and computers instead of the people physically surrounding them.

This may be an ensemble piece, which can typically be spotty by design, but there isn't a weak link in the bunch. All of the performances are powerful, empathetic, and fully grounded. Challenging himself, Jason Bateman does some of his best (dramatic) work as Rich, Ben's lawyer father who's too glued to his BlackBerry to notice his son living life as a hermit. Hope Davis also acquits herself quite well as Lydia, his wife and Ben's concerned mother, as does an emotionally available Haley Ramm as Ben's older sister who delivers a shocking "spit take" out of anger and finally the most moving image with her brother that the film ends on. Patton and Skarsgård, though looking cast against type as a very regular salesman, are both very convincing as the grieving couple who does their own legwork to regain their identities and repatch their marriage. Michael Nyqvist also adds interesting shadings as the suspected thief they go after.

By the time it comes for the film's explosive, intensely gripping climactic crescendo, which might teeter on the melodramatic as presented in super-slow motion, characters have violent, potentially tragic synchronized showdowns and no one is let off the hook. In contrast to how "Crash" made its characters confront their racial prejudices with a string of riveting happenstances, "Disconnect" resists the need to drive everything home with contrived storyline collisions, preachy moralizing, or a didactic, heavy-handed message. One of the most searingly insightful films of the year so far, "Disconnect" is going to be hard to forget. Next time you send a text message or make a payment over the Net, keep this film in mind.