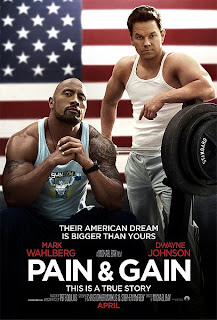 Michael Bay isn't exactly the poster boy for highbrow thinking fare, what with the mean-spirited, joylessly dumb-as-a-rock "Bad Boys II" and the increasingly brain-numbing "Transformers" franchise. With up to $200 million at his disposal, only to waste that large sum on pyrotechnics and car crashes, he knows all about overkill and the glorification of destruction. A new Bay movie that markets and prides itself on being inspired by a true story is open to ridicule, but "Pain & Gain" is a redemptive hit in his mostly-miss canon, and it only cost $25 million (which must be a little indie in Bay's eyes). Like a piece of true-life sensationalism that you read about in the tabloids but can't believe is real, the director's latest is a scathing, blackly comic, outrageously entertaining satire with mocking gallows humor blanketing a real mean streak.

Having based their script on the magazine articles by Pete Collins, screenwriting team Christopher Markus and Stephen McFeely took the facts, changed a few names, and turned a too-crazy-to-be-fiction true story into a darkly farcical caper that satirizes the bodybuilding culture and American greed. It's the summer of 1994 in Miami-Dade County, Florida. Gym rat Daniel Lugo (Mark Wahlberg) believes in fitness and the American Dream. He sees himself as a "doer," not a "don'ter," and since working as a top trainer at Sun Gym, tripling memberships, and turning it into a muscle mecca, Daniel wants more. With his fellow trainer, the steroid-using, erectile dysfunction-suffering Adrian Doorbal (Anthony Mackie), and ex-con turned born-again Christian Paul Doyle (Dwayne Johnson), Daniel hatches a get-rich scheme: kidnap a recent client, a rich, self-made A-hole named Victor Kershaw (Tony Shalhoub), torture and kill him, and clean his assets dry. Too bad these dumbbells haven't a clue on how to execute it or actually execute Victor, who still manages to live and hires a private detective, Ed Du Bois (Ed Harris), to catch the meathead criminals after the Miami Police Department doesn't believe his story.

"Pain & Gain" might be Bay's most ambitious picture to date, even if that requires dismemberment, barbecuing of severed hands, and so very few real, wise, likable characters outside of Ed, Ed's wife Cissy (Emily Rutherfurd), and Adrian's unsuspecting nurse girlfriend-turned-wife Robin (Rebel Wilson). Even in the blackest of comedies about stupid people doing stupid things, there is someone to root for (take Marge Gunderson from the Coen brothers' "Fargo" for example) and that space is occupied, albeit pretty late in the game, by Ed. So much grisly death displaces some of the humor and the movie takes a break from being fun, especially in the second act involving some ugly business with weights and horse tranquilizers, recalling the 1998 stripper-killing black comedy "Very Bad Things." Then again, "Pain" isn't in the title for nothing. Otherwise, less sensitive audiences will laugh in spite of themselves at how incompetent Daniel, Paul, and Adrian are at killing a man who still won't die after being driven into a wall, lit on fire, and run over. More importantly, the story never falls into any tumbleweed stretches because we want to see these brawny scumbags get what's coming to them.

Machismo is the name of the game, so it's ideal to have actors who are built like brick shithouses and so game to use their virile images for laughs. Wahlberg and Johnson are used to playing heroic types that are worth rooting for or show some strand of vulnerability. Not here. Full of cocky bravado, the fitness-obsessed Daniel lives by empty, self-important mantras and has such delusions of grandeur without ever giving a thought to the consequences. Wahlberg is so clued-in on how to play clueless and make it fun to watch. Equally dumb as a post, Paul is now sober and at least claims to have found Jesus, but he has a temper on him and develops a major coke addiction. In the quirkiest performance, Johnson, who will always be "The Rock" in our hearts, gets so many laughs here just by shining a dumb grin. Mackie achieves a little more charm by comparison with his impotent issues and relationship with Robin, but he's still an imbecile. Shalhoub is best at playing despicable weasels, and as the half-Colombian, half-Jewish Kershaw, you love to hate him, even if he is the victim. Though most of the women on screen are strippers or might as well be, Wilson, Rutherfurd, and Bar Paly (as Daniel and Paul's stripper/aspiring actress girlfriend Sorina) sneak in some laughs.

From the "bigger and louder is better" school of moviemaking, Bay gets away with his most accomplished work. Not only does he pull off a high-wire act in terms of tone, but this outlandishly over-the-top story actually calls for the man's kinetic, energetic, in-your-face aesthetics and cinematic fondness for drugs, violence, and scantily clad women. But in a change of pace, the editing isn't mistaken for being thrown into a blender. Whereas the director has formerly shown a flippant disregard for human life and palmed off property damage as popcorn entertainment, this movie never glorifies the dim musclehead trio's cruelty toward others. Bay still has to work on his storytelling—voice-overs from multiple characters are sloppily inserted and the narrative structure could have been even more streamlined to shave down its 129-minute run time—before he makes his first "film," but his signature cynicism has a place within this pumped-up true-crime story. More smart than dumb and more fun than not, "Pain & Gain" still works. For once, testosterone-driven idiocy has a point, so Bay, himself, has gained points.