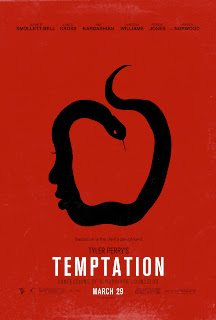 Multi-hyphenate Tyler Perry must mean well, purveying distinct products for his African-American fanbase, and nobody can knock him for making a movie that's been tampered by a studio. With that said, there is some sort of compulsive fascination in watching a new Tyler Perry movie that is all him, even without the whiplash-inducing presence of his in-drag Madea creation, but one only hopes he set out to make a bad movie with his latest. To wit: "Tyler Perry's Temptation: Confessions of a Marriage Counselor" (because "Temptation" just wasn't enough) seems intended to be a serious-minded morality tale when it's really overwrought, unbelievably loony Lifetime Movie-ready melodrama. A screen adaptation of writer-director Perry's own play "The Marriage Counselor," this begins as a slack, trashy, blatantly predictable cautionary tale on marriage and sinful infidelity with a preachy, finger-wagging message and then explosively veers into so many kinds of stupid that nutty, hysterical badness becomes enjoyably nutty, hysterical camp.

25-year-old country gal Judith (Jurnee Smollett-Bell) has known her husband, Brice (Lance Gross), for nineteen years and they've been married for six. "If smiles were dollars, they'd have had millions," says the "other" marriage counselor that's telling this story. Settling in Washington D.C. (count the umpteen establishing shots of the skyline), while her hubby works at a dinky pharmacy, she is on her third week working as an in-house marriage counselor for a matchmaking millionaire (Vanessa Williams, speaking with a ridiculous French accent that eventually gets called out). When a loaded, suave, self-made entrepreneur named Harley (Robbie Jones), "the third largest social media inventor since Zuckerberg," comes along to invest with the company, he asks Judith to work on a programming project with him. They happen to jog in the same park (he runs shirtless so she remembers him), and from then on, Judith and Harley work late hours together. As Harley flirts and Judith keeps reminding him she's married, Brice forgets his wife's birthday for the second year in a row, which makes Judith realize she's being taken for granted and desires to feel more passion and excitement. Perhaps Harley can give her animalistic sex (unlike Brice's "fluff the pillows, turn off the lights" routine) and help her open her own marriage-counseling practice, but will eating from Harley's Garden of Eden lead to Judith's betterment? Hilarity ensues!

Time and time again, Perry's films all boil down to a female protagonist overcoming life's obstacles by finding a hunky man and going to church, so obviously subtlety is never a top priority. "Temptation" is more of the same hoary battered-woman soaper with crazy-pants left turns and sanctimonious homilies being laid on like a pile driver. The first 90 minutes lag to the downward spiral of Judith being wined, dined, and bedded by Harley, disobeying her hardcore-Christian mama's advice, having really steamy sex baths, hanging out at Harley's boozy orgies, and twitching her nose a lot after meeting cocaine. The story's watershed moment is laughable, with the actors' audio track out and Jazmine Sullivan's on-the-nose tune "In Love With Another Man" stating the obvious. Then the last 20 minutes happen…and it comes close to being "great," the kind of "great" that could describe "Showgirls" and "The Room." Brice slams the door to his truck not hard enough but apparently so hard that the glass window shatters. HIV is used as a tawdry, socially irresponsible plot gimmick, in order to punish a character for being sinful, and another third-act twist, which is more of a long-time-coming reveal than a gasp-inducing revelation. Finally, the wraparound device, with two actresses playing the same character (!), is so hilariously insulting as if Perry thought anyone with a brain or even a set of working eyes would have the rug pulled out from underneath them. The results are indisputably funnier than any intentional comedy released so far this year.

Smollett-Bell (back to leading roles since 1997's "Eve's Bayou") gives it her all, until she can no longer survive her chaperone's heavy-handed writing and broad, over-the-top direction. Same goes for Gross and Jones, who are fine at the start, get to show off their chiseled physiques, and then look trapped in playing one-dimensional types (The Bad Guy and The Hero) when the film really flies off the rails. This film will also find space on reality TV star Kim Kardashian's résumé. Playing Judith's vain, mean fashionista co-worker Ava, she has as much conviction as a curvy, stylishly dressed mannequin. One of her whiny, sassy put-down lines to Judith about her poor fashion sense, "You grew up below the Mason-Dixon line," is so amusingly flat that the viewer wonders if Kardashian could actually draw the line on a map. Also, Ella Joyce, as Judith's churchgoing preacher mother Sarah, is a cartoon soap box, delivering the film's moralistic, helpful lines, "There's nothing wrong with being rich and having nice things, as long as nice things don't own you!" and "That boy is gonna hurt you something bad and he's gonna take you straight to hell!" And we can't forget singer-actress Brandy Norwood as Melinda, who starts working at the pharmacy with Brice and the dotty old-lady owner (a very funny Renée Taylor, coming from an entirely different movie) and has a Big Secret.

Not blanketly melodramatic and campy on the whole, "Temptation" has some competence before driving itself off a cliff and what we're left with invites so much derisive laughter. Cast interviews have hailed Perry for being such a flexible collaborator, but the viewer can only wonder why no one involved considered breaking Perry's faithfulness to his own source material, going full-on camp the whole time, or not editing together the weakest takes. Even if "Temptation" never works as real drama, its filmmaking sins might be entertaining selling points for packed movie houses.