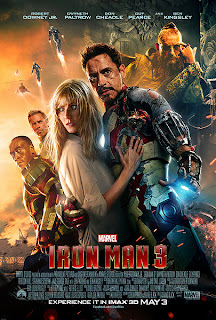 There must be some unwritten rule in Hollywood that the summer tentpole season begins the first weekend in May. The third and allegedly final Big Event in the man-and-machine franchise, "Iron Man 3" officially kicks off the summer. Looking back, 2008's "Iron Man" was a rarity, simultaneously a colorful, entertaining superhero action picture and a human story with a brain, heart and soul. Its overstuffed 2010 sequel, "Iron Man 2," spun a lot of plates with more explosions than substance but was still a minor diversion, despite being a mere place-holder for "The Avengers." The inspired casting of the heavily charismatic Robert Downey Jr. as dynamo Tony Stark, along with his metal-suited alter ego Iron Man, has certainly been a major asset, and now with writer-director Shane Black on board, "Iron Man 3" is the funniest, most entertaining, and more cohesive of the three.

Following the saving of mankind from demigods and aliens in New York City (and then wolfing down some yummy shawarma as a reward) in "The Avengers," billionaire weapons-inventor Tony Stark has returned to Malibu with Pepper Potts (Gwyneth Paltrow), his CEO and main sweetie, only to be plagued by insomnia and anxiety attacks. As he sleeplessly tinkers with new, duplicated versions of his suit, a bin Laden-esque terrorist who calls himself "The Mandarin" (Ben Kingsley) makes himself known, recording his nefarious deeds for the world to see on TV. This new bad guy on the menu has connections with Stark's past, back in 1999 during a New Years Eve party in Switzerland when he turned down a pimply, limping scientist named Aldrich Killian (Guy Pearce), who is now suave and has made bank with Extremis, an experimental regenerative treatment for crippled soldiers. Once Stark's bodyguard, Happy (Jon Favreau, who gets a running joke about TV's "Downton Abbey"), falls into a coma after the Mandarin's latest bombing attack, our hero with a big electric-generated heart isn't afraid to be put himself in the cross hairs of Killian and the Mandarin. As a little holiday greeting, Tony sends out a threat: "You just died, pal; I'm gonna come get the body."

At the helm of the first two films, Favreau now hands the reigns over to Black (one of the screenwriting pioneers of the action genre with "Lethal Weapon"), who co-wrote the busy script with Drew Pearce, and he's decidedly the reason why "Iron Man 3" doesn't just spin its wheels post-"Avengers." Black's distinct calling cards are all on display here — a playful voice-over framework, witty banter, a Christmas setting juxtaposed with violence, and Downey Jr. (who already starred in Black's directorial debut, 2005's enjoyable, darkly comic meta-noir "Kiss Kiss Bang Bang") is a perfect surrogate for Black's dialogue. But lest you think all the buddy-cop-esque interplay would displace this universe's reality of politics and terrorism as a mere grace note, Black gets the breezy tone just right and still gives us stakes.

Equipped with jokey, crackling wit and physical comedy, as well as some emotional weight and bursts of exciting action, "Iron Man 3" is more directly related to "The Avengers" than "Iron Man 2," and yet it works more as a stand-alone picture. (A sly in-joke to Thor is thrown in for good measure.) Just as scattershot as the first sequel, the film has a lot of stuff to cover—a precocious moppet, Harley (Ty Simpkins), helps out Stark in his Tennessee garage; one of Stark's old flings, botanist Maya Hanse (Rebecca Hall), reappears from that fateful Y2k night with a motive; and Lt. Col. James "Rhodey" Rhodes (Don Cheadle, Terrence Howard's replacement, getting more to do this time) suits up as "Iron Patriot" to save President Ellis (William Sadler)—but its plot threads gel more coherently. As for the action set pieces, they feel organic to the plot. Of the standouts, there's a rousingly staged helicopter attack on Stark's cliff-side mansion and a Superman-ish palm-sweater involving a barrel of human monkeys free-falling out of Air Force One. There's also a nifty recurring bit where Stark can just pose and his armor will fly onto him piece by piece, which comes in handy during the climactic fireworks. Thank goodness things move so briskly or many might scrutinize holes in the plot. First and foremost, the prime villain's plans are somewhat sketchy (world domination?), and the ground rules for his "Terminator II"-like super-weapons are a bit shaky.

Downey Jr., by now, owns the role of Tony Stark/Iron Man, throwing off hilariously glib barbs like it's second nature. He shares acerbic, rapid-fire repartee not only with Paltrow but Paul Bettany (reprising the voice of A.I. Jarvis) and Simpkins' 10-year-old Harley, who singularly defies expectations. Stark is still not only the sharp-witted playboy we remember but, with less ego, he's more vulnerable this time around, and not in a somber Christopher Nolan-Batman sort of way. As one of two villains, Kingsley is initially menacing and then unexpectedly funny in an offbeat way. Pearce gets the job done as Killian, one of the better villains Iron Man has faced, but he's less chilling than he was as a slick-haired baddie in last year's "Lawless"; in fact, James Badge Dale is more deliciously memorable as Savin. In her fourth time playing Pepper Potts, Paltrow turns out to be equipped with a fierce surprise, but before then, she's thanklessly asked to play the helpless damsel-in-distress who needs some saving. Finally, the lovely Hall isn't put to much use as Maya, but gets to play off of Downey Jr. and Paltrow briefly.

Though gizmo-minded fanboys might express disappointment, Black made the wise choice of spending more time with Stark than Iron Man (he's more often out of his suit than in it). The coda, coinciding with the whole "man-and-machine" theme, questions what the future has in store for Stark's mortality as Iron Man, as in the upcoming "Phase 2" leading into 2015's "The Avengers 2." And the obligatory but amusing post-credits stinger will get fanboys jazzed for what's to come in two years. Be-all, end-all of comic-book superhero movies? Not quite, but it's a lot of fun on the level of pure popcorn entertainment. Whereas "The Avengers" was a filet mignon, "Iron Man 3" is like delicious fully loaded potato skins. Nonetheless, Black shows a skilled hand at not allowing the action of the Marvel behemoth to overpower the characters of the story, balancing the iron with the man.