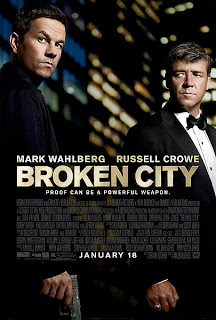 Some movies seem to exist solely to fill a release-date slot and nothing more. A workmanlike, uninspiring sex-lies-and-polaroids political-corruption potboiler, "Broken City" was made perfectly for the January doldrums. In theory, it has promise. Best known for working with his twin brother Albert on "Menace II Society" and "From Hell" as The Hughes Brothers, director Allen Hughes is behind this solo work-for-hire gig with three reliable A-list actors who have all seen better days and just seem to be making their "one for them" studio picture. There are far worse ways to spend an evening, but "Broken City" is still exceedingly perfunctory and forgettable. Hey, that's January for you.

Cleared of murder charges for shooting a homicidal rapist dead, street-wise NYPD officer Billy Taggart (Mark Wahlberg) is named a city hero by Mayor Nick Hostelter (Russell Crowe) but sacked from the police force. Seven years later, Billy works as a low-level private eye who has his own office but is just barely getting by. How fortuitous then once the mayor calls him in, offering him a job that comes with a hefty check: tail his wife, Cathleen (Catherine Zeta-Jones), and find the man he suspects is nailing her. Billy starts following the city's first lady to her rendezvous and snapping pictures, discovering Cathleen's paramour just so happens to be Paul (Kyle Chandler), the campaign manager for her husband's mayoral opponent Jack Valliant (Barry Pepper). After there's a scandalous murder, Billy just keeps getting in too deep. Is anything what it seems? Are political figures two-faced and will they do anything for their own political gain? The double-crosses and shady dealings aren't so shocking.

From the Black List pile of the "most liked" unproduced screenplays, rookie screenwriter Brian Tucker's sloppy, overwritten script starts off on the right track, building some juicy intrigue. Then it really feels like everything was made up as Hughes began shooting it. Once it's revealed that key characters have been keeping cards close to the vest, the story is just a foregone conclusion, trudging on and waiting for the plot machinations to catch up. In an attempt to develop Billy's personal life, there's a piddling much-ado-about-nothing subplot involving Billy's beautiful Puerto Rican girlfriend Natalie (Natalie Martinez)—her sister was a victim of the rapist Billy killed—who's busy acting in an amateurish-looking indie film. At the premiere (yes, this thing gets a premiere), Billy accompanies Natalie and during the screening of her feature debut, there's a gratuitous sex scene with the actor-director (Justin Chambers) that makes Billy uncomfortable and jealous. Thereafter, he falls off the wagon (even though he's given up the drink for Natalie), gets so belligerent that he makes a scene at the after-party and storms out, and ends up yelling at oncoming traffic. Wahlberg is directed to overplay a bender to the point of irresistible jeering, and then a scene later (the same night, mind you), he is sober. Huh?

Though not without swagger, Wahlberg is on auto-pilot here. It certainly doesn't help that Billy is such an apathetic patsy and not very likable, getting in trouble with terrorist jokes and acting homophobic. Crowe, sporting an Oompa Loompa spray tan, plays sleazy well enough as the crooked mayor, but he's slumming it after giving singing a try in "Les Misérables." A largely wasted Zeta-Jones looks stylishly dressed and deliciously delivers a few ice-cold lines in her final scene, but the cardboard character she's saddled with doesn't allow her to color much outside the lines. Leave it to the supporting characters to make more of an impression: Billy's sharp-tongued Girl Friday is the most appealing, as played by a vivacious Alona Tal, and Jeffrey Wright adds interest to a marginal role as the police commissioner.

The second boilerplate January-released thriller starring and produced by Wahlberg (2012's "Contraband" being the other), "Broken City" is rickety but minimally watchable, if primarily on a surface level for the gritty, shadowy neo-noir look Hughes brings to the urban setting. Otherwise, this thriller thinks it's being slick when it's just the cinematic equivalent of an irreparably shredded paycheck.