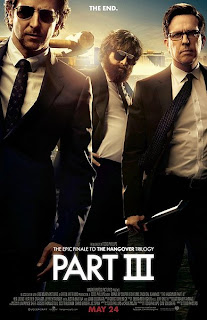 Because we were all begging to see what the "Wolfpack" and Mr. Chow were doing in the interim, "The Hangover Part III" is meant to send the gang out in style. Box-office success was enough incentive, apparently, to turn 2009's "The Hangover"—a brashly funny, often inspired surprise that has become something of a frat-boy classic—into a trilogy. Writer-director Todd Phillips must have realized his lazy but more-funny-than-not 2011 sequel "The Hangover Part II" was just a Xerox copy, so he and fellow screenwriter Craig Mazin (2013's "Identity Thief") racked their brains to diverge slightly from the formula and twist expectations a little. It's a small blessing that this third and presumably last installment tries out a darker, more dangerous tone, but it's no longer a raunchy comedy or a comedy, period.

No one actually gets hung over this time, unless you count the mid-credits "morning after" epilogue, which substitutes for these movies' obligatory slideshow and happens to approximate the only belly laughs. Off his medication before his well-off father (Jeffrey Tambor) suffers a fatal heart attack, Alan (Zach Galifianakis) becomes the center of an intervention staged by his family and friends, including Phil (Bradley Cooper), Stu (Ed Helms), and brother-in-law Doug (Justin Bartha). The road trip to a rehab clinic begins and then ends when the four guys are run off the road by Marshall (John Goodman) and his pig-masked goons. Holding Doug as collateral (can Bartha ever catch a break?), the gangster orders the three to find Mr. Leslie Chow (Ken Jeong), who has escaped from a Thai prison, and steal back his $21 million in gold. Tracking the insane, slippery Chow takes them to Tijuana and Las Vegas, where more hilarity and mayhem ensue.

The previous "Hangover" movies have more or less been comedic exercises in schadenfreude. Ditching the hook of these characters piecing together their debaucherous night and putting them on a capture mission and caper, this spotty, decidedly joyless conclusion also forgets to be funny most of the time with a truly cruel streak. Sure, no severed fingers are found in an ice bowl, but Phillips must have it in for animals. Heck, the second scene uses the decapitation of Alan's newly purchased pet giraffe being the cause for a highway pile-up as a punchline. That's not exactly a surefire way to get us laughing. Or, what about when Chow shoots at his cockfighting roosters and smothers one with a pillow? The meanness even extends to Alan wishing his mother dead when giving his father's eulogy, which would be forgivable had his mental illness been treated as more than a sad running joke. In the long run, the most misguided decision is dumping Alan's mental rehabilitation so the buddies can get mixed up with Leslie Chow. Whereas Chow by way of Jeong added bursts of lunatic energy as a supporting character in the first two films, more of him wears thin quickly — he's even more of an insufferable whack job with a grating maniacal laugh, an insult to bisexuals and cokeheads.

On the positive, a few throwaway tidbits amuse, including Alan's obliviousness to every situation or when he asks Phil where he bought his shirt during a break-in, and there's a surprisingly vertiginous set-piece on the roof of Caesar's Palace. If any humor is tapped, it's the doing of Galifiankis, who can still wring chuckles out of his weird, off-kilter man-child shtick (like a simple, effeminate shake of his hair). When the guys make a stop to see ex-hooker Jade (Heather Graham), Alan shares a sweet moment that's over too quickly with her son, Tyler/Carlos (cute towhead Grant Holmquist), the same baby he strapped to his chest four years ago. There's also Alan's weirdly priceless interaction with a pawn shop owner (the always-committed Melissa McCarthy), who just might be his soul mate. Otherwise, Helms and Cooper (who has already shown he's capable of challenging himself) resume their roles, as the neurotic Stu and the arrogant Phil, out of contractual obligations.

It must have been fun for Cooper, Helms, and Galifianakis to work together and shoot in Vegas again, but "The Hangover Part III" consistently struggles to search for a reason to exist beyond contrivances and monetary reasons. Even if you do end up defending this dreary, half-assed capper to an unnecessary trilogy, you'll probably hate yourself in the morning. Cheers to this being "the end."