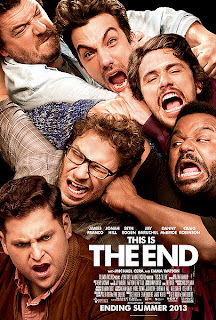 What a disappointing year it has been for movie comedies—"Movie 43," "Identity Thief," and "The Hangover Part III" were a few of the fatalities—but finally, a release that's never lazy, patchy or desperate. Hollywood loves seeing the world go up in flames, so it only made sense for a posse of comic all-stars to jump on the conceit of an apocalyptic comedy. With "This Is the End," writing partners Seth Rogen and Evan Goldberg (who first penned "Superbad" and "Pineapple Express") make their directorial debuts, taking a gambit on not only straddling sci-fi horror and comedy but also having the actors play exaggerated versions of their public personas. It's like a giant inside-joke that would seem like a self-pleased, masturbatory vanity project on paper, but actually, "This Is the End" is a gleefully foul-mouthed, often inspiredly nutty, anything-goes meta-lark. When it's funny, it's uproariously funny.

Pre-apocalypse, Canadian Jay Baruchel arrives in Los Angeles for a weekend of hanging out with his longtime best bud, Seth Rogen. Comfortable with just smoking pot and chilling out, Jay soon gets dragged along by the more eager Seth to a housewarming blow-out party at James Franco's mansion. There, Jay tries hobnobbing with some of Seth's Hollywood friends but feels on the outs. After the two friends experience an "earthquake" and people getting sucked up into the sky outside, Judgment Day officially arrives. The party ends, most of the famous-faced guests die, and the Hollywood Hills are engulfed in an inferno outside of Franco's fortress. Holed up inside with a dwindling supply of food and water, Jay, Seth, Franco, Jonah Hill, Craig Robinson, and an uninvited Danny McBride board up the place and fight off some demonic monsters before the Rapture. Can any of them keep their egos in check to be saved?

The calm before "the storm" offers a party of jam-packed cameos by Rihanna, Mindy Kaling, Christopher Mintz-Plasse, Martin Starr, David Krumholtz, Jason Segel, Kevin Hart, Aziz Ansari, Paul Rudd, and, most freewheeling of all, Michael Cera, who has so much fun playing himself as an appalling, coke-snorting sexual deviant (not unlike Neil Patrick Harris in the "Harold & Kumar" movies). Naturally, all of them fall to their death in a fiery sinkhole. As our six "heroes" play heightened versions of themselves, Rogen is the pot-smoking lug with that distinct laugh, Baruchel is the nebbish Canadian boy, and their friendship is the film's heart. Franco also pokes fun at his artsy pretentiousness and intensely creepy obsession with Rogen; Hill is so nice that he ends up a hypocrite; Robinson is Robinson, sporting a "Take Yo Panties Off" shirt; and McBride might be the most selfish human being when the world's about to end. These guys bounce off one another quite well and each of them steal laughs. Eventually, how willing they are to take stabs at themselves (and each other) is part of the joke. As a piece of edgy self-reference, the gang comments on how each of them are overpaid actors while real people have jobs. You'll just have to wait and see who's more selfless in sacrificing themselves for their friends; it's a sharp mixture of fame and theology, actually.

Though the first two-thirds of the film are spent mostly at Franco's address, which could've been deadly had the film caught a case of cabin fever, Rogen and Goldberg come up with plenty of ideas to sustain Rogen and Baruchel's 2007 short film, "Jay and Seth vs. The Apocalypse," that gets stretched to 107 minutes. No target is off limits. There are self-deprecating potshots at these stars and their movies, including "The Green Hornet" and "Your Highness," and who's a sellout. A low-budget "Pineapple Express 2" gets the guerrilla-filmmaking treatment. Party guest Emma Watson comes back, knocking down the boarded-up front door with an axe. Sure, there is a lot of obscene, sophomoric humor that hits some base points, especially a threatening conversation about ejaculation, but some dark, weird touches and comedic gore keep it from being just a lot of ad-libbing. The special effects are decidedly low-end and schlocky but intentionally so; a Hellish landscape of the Hollywood Hills, which are subbed by Louisiana, looks like something out of the Adam Sandler flop "Little Nicky." Henry Jackman's self-parodic scoring of chanting is a plus, too, for the religious-horror element, which isn't scary but startling on occasion. If you ever wanted a tasteless homage to "Rosemary's Baby" and "The Exorcist" in the same movie, look no further. Also, the funniest, sweetest use of a best-selling single to describe a bromance? Check!

In a way, "This Is the End" shouldn't even work as a movie. It's shaggily scripted and not every joke is going to have as much staying power as others. But, as there are action movies that have action all the time, this is a comedy that has laughs all the time, delivering them like clockwork. Many will be talking about a couple of surprising cameos, especially one that culminates in an infectious musical sequence. If merely hanging out with this selection of buds during the End of Days doesn't sound like a blast, then "This Is the End" won't sell you. Otherwise, it's a side-splitting hoot and a half, and should receive much fanfare from anyone who wants to laugh him or herself stupid from top to bottom.